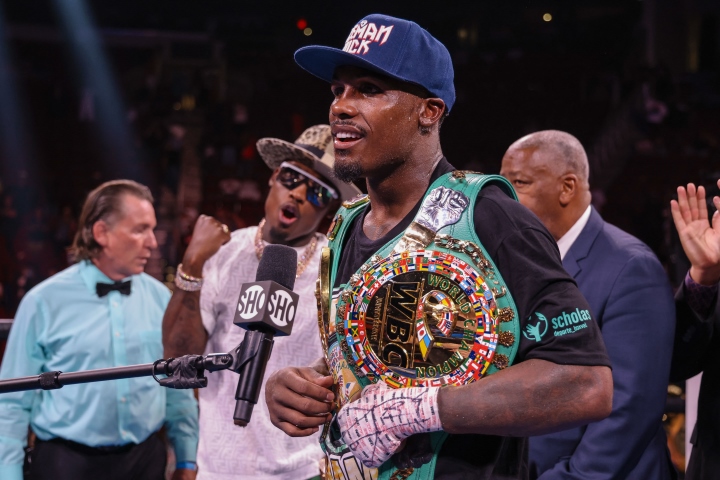 The unbeaten WBC champion jokingly referred to Andrade as a “horrible fighter,” the same criticism Alvarez offered when he got into a shouting match with Andrade after Alvarez’s victory over Billy Joe Saunders last month. The 31-year-old Charlo contended that he is receptive to fighting Andrade next, yet he suggested that he’d like to see Andrade beat his tough, unorthodox opponent Saturday night, Juan Macias Montiel, before putting together their fight for his WBC belt and Andrade’s WBO middleweight championship.

Mexico’s Montiel didn’t win many rounds while challenging Charlo, but the awkward contender gave Charlo some difficulty by boxing out of a southpaw stance for most of their 12-round fight at Toyota Center in Houston. The undefeated Andrade also is a southpaw, though his style doesn’t at all resemble the way Montiel boxes.

“I don’t make the fights,” Charlo said. “I don’t pick the fights. You know, whatever circumstances that he in, I’m not here for none of that. I’m a fighter. I don’t, look, I own Lions Only Promotions. But I don’t have rights to make the sanctioned bouts and to make the commissioners of each belt and he fights on a different network. I’m not into all that, all right? I just say if you wanna fight, you know how to make the fight happen. That’s all I’m about. Like, I’m not gonna go back and forth with him.

Andrade, of Providence, Rhode Island, is promoted by Eddie Hearn, whose well-documented email offer of $7 million to fight Andrade in December 2019 has been dismissed by Charlo. The 31-year-old Charlo officially promotes himself, but he is affiliated with Al Haymon’s Premier Boxing Champions, which has network deals with Showtime and FOX.

Showtime has aired eight of Charlo’s past nine fights either live on the network or on pay-per-view. The 33-year-old Andrade’s past five fights have been streamed by DAZN, with which Hearn’s Matchroom Boxing has an exclusive agreement.

Those complications aside, Charlo claims he still wants to fight Andrade.

“For sure,” Andrade said. “He got a belt. Yeah, let’s go get him. He talkin’ and he gonna run right into some, you know – we about that. Like, I’m ready. Like, don’t worry about none of that. Like, we gonna take care, we gonna clean up the division sooner or later. Like, man, I’m really relaxed. I’m chillin’. You see me walkin’ through. Like, [I] make the best adjustments and that’s just what I’m here for.”