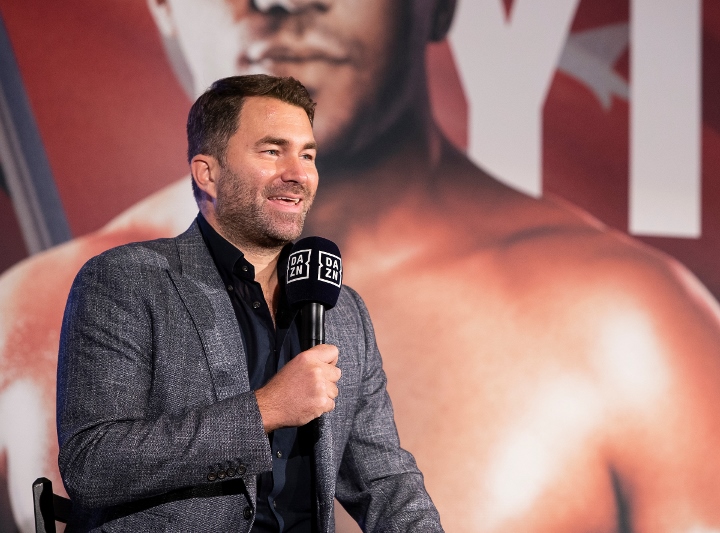 Eddie Hearn says that he expects members of his stable will be approached by promoters working for Sky, but he does not expect any exodus of talent since his switch from Sky to DAZN.

Hearn ended at 27-year partnership between Matchroom and Sky in boxing this month and launches his association with DAZN with Fight Camp at the end of July.

He says most of the fighters he promotes are no under contract but insists he would not stand in the way of a boxer seeking a better deal elsewhere.

“The majority of our fighters, especially ones we have used over the last month or so are all under contract to us,” Hearn said. “I have been very honest with my opinion. If a fighter doesn’t want to be with us, if they think there is a better home for them…

“You don’t want to tell a fighter that you have now got a substantial budget, but you are better off being honest, because we are going to have to pay them more and it is great for them. We have done a number of deals over the past month with fighters, Conor Benn is an example (who has signed a five-fight deal), where he is being royally rewarded.”

Hearn says that, rather, than looking to expand his roster, he could be looking to shrink it and is faced with having to put more bouts on Fight Camp to get his boxers work.

“We really have too many fighters,” he said. “It is getting to a point even on Fight Camp we will be adding another five or six fights. People need to get out. But that is another reason why the global deal (with DAZN) is important because we will probably have three Brits on that card on August 28 or whenever that is in California.

“Fighters may fight in Mexico, in Spain, in Italy. We need to refine the group of fighters. They may be a fighter who isn’t getting the attention that he wants and he goes and looks for another opportunity. We have identified those key ones in terms of driving noise, numbers and subscribers and making sure that we focus on them moving forward.

“We are not looking to bring YouTubers in. But the ones who drive numbers are always the ones who are going to get more money and more opportunities.”

One area where Hearn is looking to expand is with boxers competing at the Tokyo Olympics. A total of 11 boxers from Great Britain and seven from Ireland have qualified.

“A lot depends on who medals and who doesn’t,” Hearn said. “There are five or six now who we would be very interested in bringing to the roster, if they medal the price goes up for them and the demand goes up. We have seen that before with AJ, Luke Campbell and the other fighters we signed from London and again Rio. A lot of them will medal, because we have got a fantastic team who are full of confidence.

“We will be making a play for the ones we feel have the ability to firstly become champions and have the right style for the pro ranks and secondly the ones who have characters and personalities to drive numbers on DAZN.”

But Hearn says that he will be looking at boxers from all the markets DAZN will be expanding to. That means Italy, Spain and Mexico as well as likely moves into Australia and Japan, although signing boxers from outside those territories is not so easy.

“We recently released Dani Yeleussinov (the 2016 welterweight gold medal-winner from Kazakhstan),” Hearn said. “It is difficult if you are not physically in a market, like Kazakhstan, it is so difficult to build fighters like that in markets we are in.

“We want to focus on the markets we are in or the ones we will be in. It is no secret that it is only a matter of time until we launch in Australia. We will be looking at fighters from that market, Mexico, United States, UK, where we have a significant home for them already.”

Estrada vs. Chocolatito Trilogy: Anticipated Fireworks in Expected Final Chapter
Crawford: Something wrong with Charlo, would love chance to shut him up
Crawford breaks down matchup in Tank vs Garcia and Benavidez vs Plant
Regis Prograis Knocks Out Jose Zepeda
Canelo Alvarez Picks Benavidez To Beat Plant: ‘It’s Going To Be Competitive’