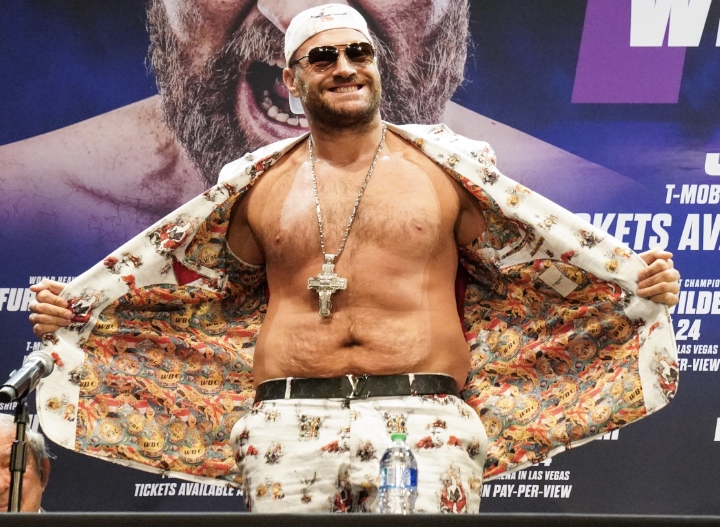 Four weeks out from a big fight, some folks out there are surely thinking it.

But we’ll go ahead and say it.

Tyson Fury is the most physically daunting heavyweight champion who’s ever lived.

And when you blend athletic ability with a gargantuan 81-inch, 273-pound frame, it’s hard to imagine anyone who’s ever appeared in boxing’s marquee division stepping into a 20 x 20 square and convincingly having their way with him.

Oh sure, we know he’s had difficult moments.

Both Neven Pajkic and Steve Cunningham knocked him off his feet before being stopped themselves, and Deontay Wilder dropped him twice in their first run-through.

But the most recent of those misfires happened 30 months ago — when Kawhi Leonard still played in Toronto, Tom Brady still played in New England and Donald Trump still received mail at a pretty famous executive residence in Washington, D.C.

In case your Wi-Fi’s been out, a few things have changed since then.

And the version of Fury who’s been on patrol since cheating unconsciousness against Wilder has been every bit as close to impenetrable as Mike Tyson, Lennox Lewis or Sonny Liston — each of whom lost multiple fights to significant underdogs before the final bell — ever dreamed of being.

He’s dismissed 21 of 30 opponents before the final bell across 12-plus years, and has gotten to a point where if a foe wins a round for every three he loses, it’s framed as an indication of vulnerability.

Like suggesting 42-14 on a football field wouldn’t pass muster as a one-sided result.

And the closer Fury is compared to those who came before, the clearer that is to see.

Of the four men typically deemed worthy of the division’s Mount Rushmore — Joe Louis, Rocky Marciano, Muhammad Ali and Larry Holmes — only Ali and Holmes would be within six inches and 50 pounds of the mammoth Brit, while Louis and Marciano, on their title-winning nights, were far closer in weight to Canelo Alvarez than Fury.

But when it comes to the biggest of big men, it helps.

Upon realizing the heaviest top-shelf foe either Louis or Marciano ever fought was a cruiserweight-sized Joe Walcott, it’s easy to imagine the “Brown Bomber” and the “Brockton Blockbuster” bouncing off the mat like Joe Frazier in Jamaica when being punished by a guy who outweighs them by 72 and 85 pounds.

Meanwhile, with Ali and Holmes, it’s just as easy to envision the same bigger man controlling space with jabs from tree-limb-like forearms, while the supremely talented smaller men struggle to simply stand ground on a consistent basis.

Fury, by the way, is six inches taller and 53 pounds heavier than “Big” George Foreman was the night he fought Ali in 1974, and he’s both bigger and light years more skilled by any measure than the biggest challenge Holmes ever encountered as champion — a 6-foot-5, 225-pound Gerry Cooney — in 1982.

All things equal, does that mean Fury beats a similarly sized version of every past kingpin?

He’s not as elegant as “The Greatest,” not as rugged as the “Real Deal” and not as excellent all-around as the “Easton Assassin.” Put them in all in equally equipped race cars and “The Gypsy King” qualifies somewhere other than the pole position in a race for history’s top heavyweight spot.

But when you consider the extra horsepower that being both gigantic and capable brings — and you’re interested in something more than esoteric resonance — there’s no one else to be riding with when the light goes green.

Because when it comes to the biggest men, he’s the best there’s ever been.

Fitzbitz says: Believe what you want about Martinez and his street cred at 112 pounds, but he’s in no danger here against a guy who’s done precisely nothing to deserve the shot. Martinez in 6 (99/1)

Why it’s trash: Don’t get me wrong. I like this match plenty and I’ll be intrigued to see if Davis can carry his power to yet another weight class against a skilled foe with significant advantages in both height and reach. But Josh Taylor has earned his place as the WBA’s champ and this fight doesn’t change it.

Why it’s trash: One could be annoyed that a guy with four fights and no major victories has already been elevated to title status. Or that his challenger has had one 10-round fight, against Julio Cesar Chavez Jr. And that doesn’t even consider the reality that a guy named Canelo is the WBA’s real champion.

NOTE: Fights previewed are only those involving a sanctioning body’s full-fledged title-holder – no interim, diamond, silver, etc. Fights for WBA “world championships” are only included if no “super champion” exists in the weight class.

Lyle Fitzsimmons has covered professional boxing since 1995 and written a weekly column for Boxing Scene since 2008. He is a full voting member of the Boxing Writers Association of America. Reach him at fitzbitz@msn.com or follow him on Twitter – @fitzbitz.