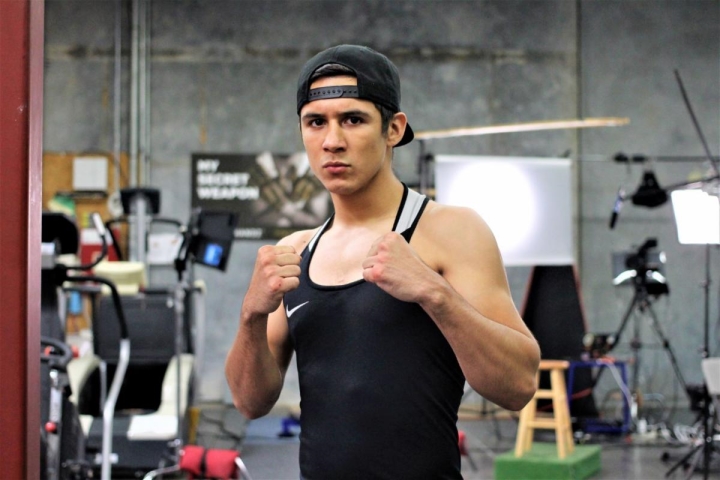 Rising unbeaten super lightweight Omar “El Relámpago” Juarez shared insights into his training camp as he prepares to take on All Rivera in a 10-round attraction that kicks off FOX PBC Fight Night and on FOX Deportes this Sunday, June 27 from The Armory in Minneapolis.

Tickets for the event, which is promoted by TGB Promotions and Warriors Boxing, are on sale now and can be purchased at The Armory at http://ArmoryMN.com/ and through Ticketmaster.

The 21-year-old Juarez (11-0, 5 KOs) spent this training camp in California’s Bay Area, as he trained together with WBA Super Lightweight Champion Mario Barrios at Virgil Hunter’s gym. Here is what Juarez had to say about that experience and more:

On his recent training camp:

“For most of this training camp, my trainer Rick Nunez and I spent our days up in the Bay Area working out alongside Mario Barrios and Virgil Hunter. It was quite different from training in San Antonio like we usually do because the weather is so different. Training in a colder climate took some getting used to, but we had a great camp and got some good southpaw sparring. Training alongside Barrios was also inspiring as I got to see what a world class training camp looks like. My weight is good and I’ll be ready to go on fight night.”

On his upcoming matchup with All Rivera:

“This will be my third fight in a row where my opponent has twice as many fights as me, so I know how dangerous this fight is. I’ve never wanted easy fights and I’m expecting Rivera to be at his best. These are the types of fights that will push me and make me a better fighter. I know he has a lot of power and that his experience will be a challenge. I have faith that I’ll be able to make the proper adjustments once I get in the ring with him. This is going to be another great step up fight for me and I can’t wait to show everyone what I’ve been working on.”

On fighting on FOX on Sunday:

“The exposure I’ve been getting while fighting on FOX has been unbelievable. Every young fighter always dreams of fighting on the big stage, and I’ve been blessed to be a staple on FOX or FS1 for most of my career. I’m very grateful to my management team for this opportunity and that all my fans back home in Brownsville, Texas will be able to tune in. This is primetime on Sunday so you know I’ll be coming out with my fists flying.”

The Man Behind the Art
Frampton: Joshua needs to bully Usyk, not sure he can do it over 12
Marlen Esparza Defeats Eva Guzman On The Cards
Chris Small: Drawn to Boxing
Adam Kownacki KOs Gerald Washington in RD2