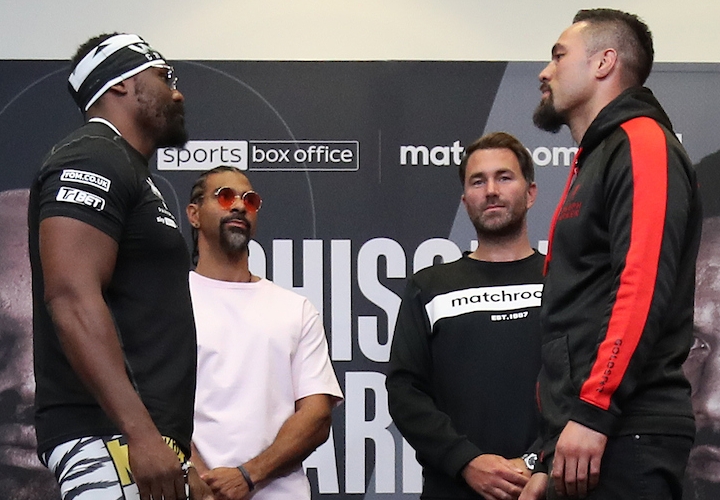 Back in May, a heavyweight crossroads fight saw former WBO world champion Joseph Parker get off the floor to win a twelve round split decision over veteran Derek Chisora.

It was a close fight that saw Parker get decked in the very first round.

Chisora was not happy with the scoring and there were observers who felt he had done enough to win.

After the fight, both boxers expressed their desire to have a rematch to set the record straight.

According to Parker’s manager, David Higgins, the two sides are now discussing the possibility of a rematch for later in the year, at a venue to be determined in the UK.

“There’s talk of Derek Chisora and a rematch,” said Higgins to Sky Sports. “If I was Chisora, I’d be planning my retirement after that fight, if it is to happen.

“It’s under negotiation now, so the fight is not confirmed. What I do know is that Chisora has vocally said he wants a rematch with Joseph Parker. Joseph is quite happy to fight Chisora again. He knows exactly what he’s dealing with now.

“Chisora had that early first round punch, but Joseph is confident he can make good work of Chisora and put him away into retirement. He’s got no problems taking the fight.

“The discussions have looked at later in the year, October, November. I think the UK would be sensible, obviously because they are both household names in the big UK market.”

Parker is currently in camp with WBC heavyweight champion Tyson Fury. Parker is trained by Andy Lee, who is part of Fury’s training team. Fury is scheduled to fight on July 24, in a trilogy fight with Deontay Wilder at the T-Mobile Arena in Las Vegas.