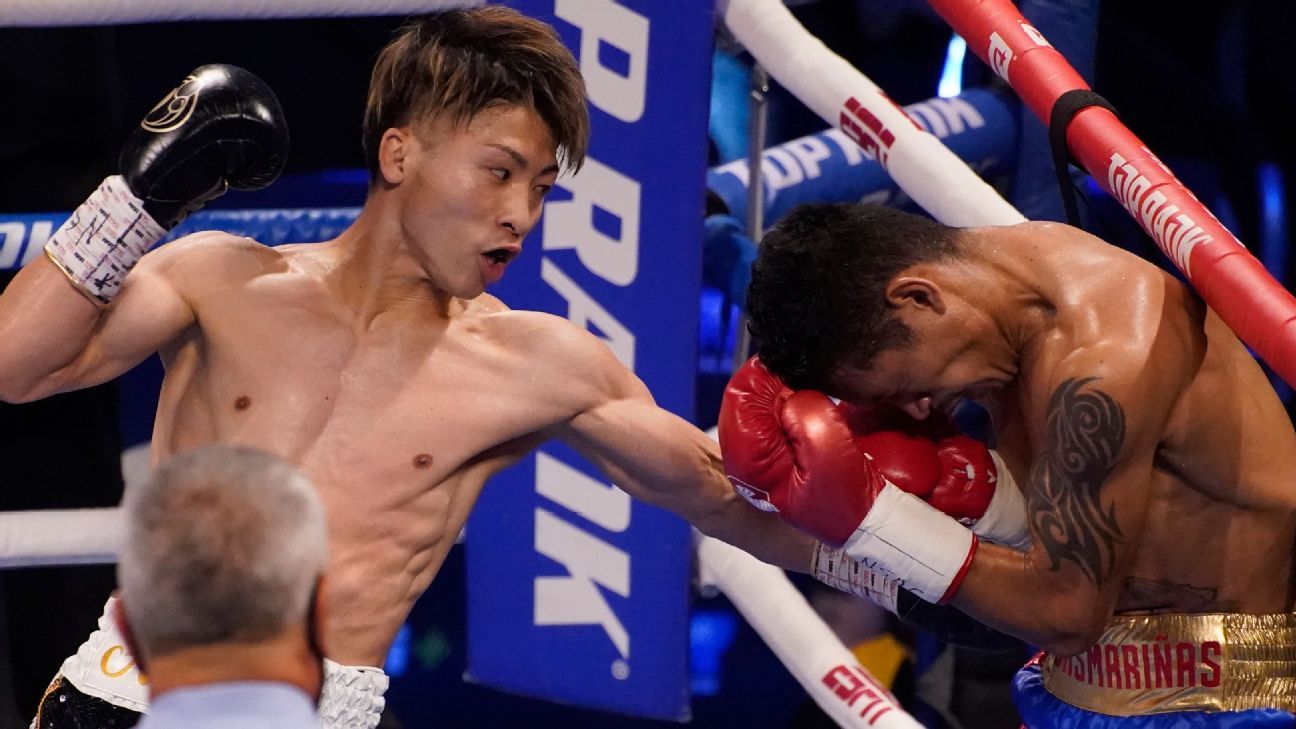 The world titlists held serve Saturday night in Las Vegas, as Naoya Inoue, Mikaela Mayer and Jermall Charlo successfully retained their belts. But while this upcoming weekend does offer up another world title fight in the form of Gervonta Davis facing Mario Barrios at 140 pounds — perhaps Davis’ best fighting weight — there’s a different bit of intrigue heading into Saturday.

Vasiliy Lomachenko hasn’t stepped in the ring since losing his lightweight titles to Teofimo Lopez last October. Since that time, he has had surgery and plenty of time to recover, but will we get the Lomachenko of old on Saturday night’s Top Rank card in Las Vegas? Will he showcase his highly effective rhythm, which takes his opponents out of their own game, or will Masayoshi Nakatani prove to be too much for a first fight back?

As we look further into the future, can we expect more gold from Inoue as the bantamweight division lines up another unification bout? And despite her clear win this weekend, is Mayer ready for Katie Taylor?

On the boxing sideshow front, Oscar De La Hoya returns this September to face Vitor Belfort, but will he suffer the same fate that Julio Cesar Chavez Jr. did this weekend against Anderson Silva?

Michael Rothstein, Ben Baby, Cameron Wolfe and Brett Okamoto offer up their takes on what is real and what’s not when it comes to boxing’s biggest headlines.

We will see the Vasiliy Lomachenko of old on Saturday

Real. In the latter half of Lomachenko’s upset loss to Teofimo Lopez, we saw what made Lomachenko one of the best pound-for-pound fighters in the world. Lomachenko, 33, has a lot of amateur mileage on his body but just 16 professional bouts. And despite last year’s defeat inside the Top Rank “bubble,” Lomachenko still has a lot to offer in the lightweight division.

Nakatani is a good opponent, but he will be a heavy underdog against someone who is still in ESPN’s pound-for-pound top 10. And even though Lomachenko doesn’t seem to have the same power in the 135-pound division that he did at junior lightweight, he should still be considered one of the top lightweights until he shows otherwise. — Baby

Real. Very, very real. Inoue is, at worst, one of the top five pound-for-pound boxers in the world, regardless of division. At the age of 28, he’s still in his prime and seems to get better every fight. He’s also very cognizant of where he sits in the pound-for-pound ratings.

So, in other words, he understands what is needed to achieve generational greatness. Plus, he wants these fights — craves them. He’ll fight anyone, and has already said he will wait for the John Riel Casimero-Nonito Donaire winner.

That fight will be challenging when it comes for Inoue, but he has shown nothing to indicate he has holes in his approach that could keep him from becoming undisputed at bantamweight. — Rothstein

Mikaela Mayer is ready for Katie Taylor at lightweight.

No, not real — not yet. Before Mayer can even think about a superfight against Taylor, she should focus on unifying her division — Maiva Hamadouche is next later this year. If Mayer can unify two world titles, and especially if she puts on a strong performance against Maiva Hamadouche, she’ll have a better case to make.

Mayer is incredibly talented, but Taylor might be the best in the game, along with Claressa Shields. I would also wait to put this fight on, because having two unified champions against one another is a fight that can sell.

And this might be a stretch but something to consider: It would be a heck of a fight to introduce using three-minute rounds for women’s bouts. — Rothstein

Gervonta Davis should stay at 140

Unclear. Davis has to decide what he wants to do next, and commit to it. Right now, it’s unclear what Davis wants his career to be. He hasn’t stayed in a single division long enough to really become a significant player. There’s no doubt he’s one of the four big names around the 135-pound division, and Davis, Devin Haney, Ryan Garcia and Teofimo Lopez are all young, rising stars who have the potential to carry the sport.

But who, exactly, does Davis want to face? None of those fighters are under the Premier Boxing Champions umbrella, so that requires PBC’s Al Haymon to do business with other promoters to make those big fights happen. Haymon has certainly shown the willingness to do that if it makes financial sense.

Davis is fighting Mario Barrios at junior welterweight for one of the secondary belts in the 140-pound division. It makes sense for Davis to stay at that weight only if Josh Taylor vacates the undisputed title and moves up to welterweight. That leaves a path for Davis to fight someone like Regis Prograis and then make a push for one of the four major belts at 140.

Mapping out all these paths is a fun exercise. The big questions, however, remain. How great does Tank Davis truly want to be? And is he willing to fight the names that matter to make that happen? — Baby

Not real. Valdez would defeat Herring if that bout happened. But in what would likely be deemed close to a 50-50 bout between Valdez and Stevenson, Stevenson’s defense, footwork and technique would help him outbox the more powerful Valdez to earn a decision victory, in my eyes.

Valdez is the king of the junior lightweight division right now, but Stevenson is the most skilled fighter of the group. I believe he beats Herring later this year, and then Valdez next year, to become a unified champion. — Wolfe

Real. Well … I suppose that depends on whether a “winner” is even declared. This fight was announced as an exhibition, presumably meaning there won’t be an official result. But that didn’t stop offshore books from opening Belfort as a small betting favorite.

But De La Hoya hasn’t been a fighter since he retired in 2008, and at 48 years old, there are legitimate questions as to how fit he even is to compete in a combat sport at this point in his life. Belfort, who is four years younger at age 44, had been competing in MMA regularly (at a high level) up until 2018. Whether or not De La Hoya is the superior boxer (he is) won’t matter as much as the amount of time he has now spent as a civilian. Frankly, I expect Belfort to knock him out. — Okamoto