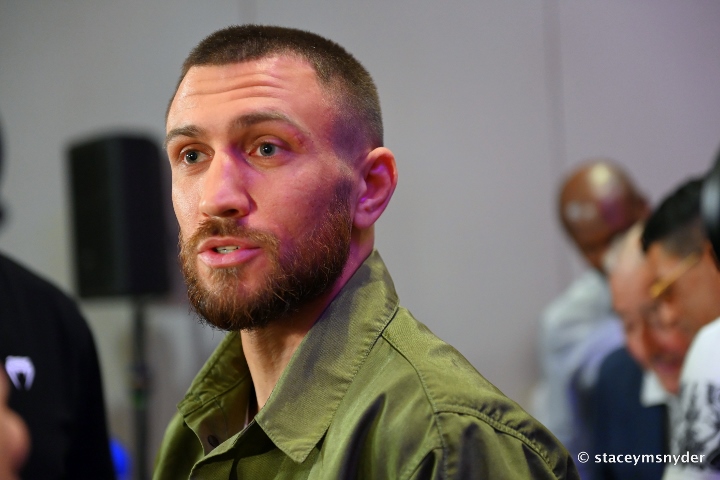 Former world champion Anthony Crolla is backing Vasiliy Lomachenko to return in sensational fashion on Saturday night, when he returns to the ring against dangerous Masayoshi Nakatani in Las Vegas.

The contest will be the first for Lomachenko since suffering a twelve round decision loss to Teofimo Lopez in their unification clash last October.

Nakatani is coming back from the biggest win of his career, a knockout of Puerto Rican Olympian Felix Verdejo.

Crolla suffered a brutal knockout loss at the hands of Lomachenko in 2019.

He expects Lomachenko to come out looking for an A-level performance that sends a loud message to the rest of the lightweight division.

“He will be looking to make a statement. That’s something I expect him to do,” Crolla told Sky Sports News. He will go down as an all-time great. He will put on a display to remind people.

“He was an unbelievable opponent. I always wish I could have done things differently but I’m not suggesting the result would have been different. When you get in there with him there is a realization that he is a very special fighter. I faced a very ruthless Lomachenko on that night.

“He is arguably the best amateur boxer to ever live. And what he has done as a professional, in a career of 16 fights, to win world titles at three weights is unbelievable.”

The two-time Olympic gold medal winner has since undergone surgery for the injury – and there will be a lot of expectations on how well he performs.

“We’ll see how the shoulder is,” Crolla said.

“He has been around a long time. He was on the amateur circuit for years, fighting top guys, and at some point it will catch up.”

Shakur Stevenson Blasts Isaac Cruz: ‘I Turn Pits Into Poodles’
Ryan Garcia on Tank: Once He Gets Hit, Let’s See How He Reacts!
Should Stephen Fulton and Brandon Figueroa Run It Back?!
Garcia: I had to chase Tank down but finally got the fight, time to prove I’m the best
BN Preview: Dillian Whyte goes back to square one against the unbeaten Jermaine Franklin