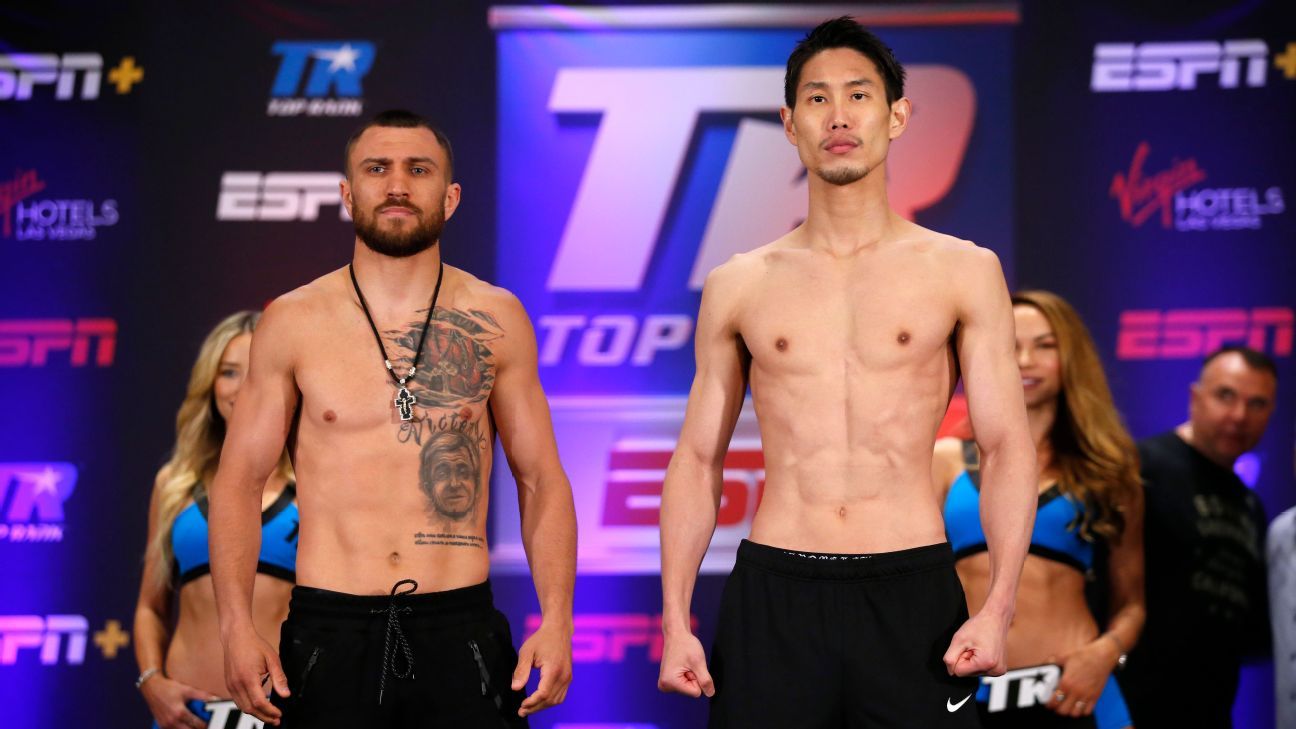 Former lightweight champion Vasiliy Lomachenko returns to the ring on Saturday (ESPN+, 7:15 p.m. ET) to face Masayoshi Nakatani in the main event of a Top Rank Boxing card at Virgin Hotels Las Vegas. This is Lomachenko’s first fight since losing his belts to Teofimo Lopez in October 2020.

Lomachenko (14-2, 10 KOs), 33, of Ukraine, is taking a big risk against Nakatani (19-1, 13 KOs), 32, of Japan, who in 2019 gave Lopez one of the toughest fights of his career. Defeating Nakatani could be a good way for Lomachenko to reestablish himself as top fighter in the division. And he knows it.

“I can’t wait to be back in the ring,” Lomachenko said at a press conference on Thursday. I’m very excited and I want to show my best skills. I want to prove to myself, my family, my friends, my team, who I am in the ring.”

Gervonta Davis (24-0, 23 KOs), 26, of Baltimore, is moving up in weight to face junior welterweight titlist Mario Barrios (26-0, 17 KOs), 26, of San Antonio, Texas, who holds the WBA “regular” belt (Showtime PPV, 9 p.m. ET). While Davis, who has titles at junior lightweight and lightweight, is the smaller fighter, he said he has been fighting bigger guys in the gym to get ready for Barrios, and believes he can become a three-division titleholder on Saturday.

“I hate when people think that I’m small and try to take advantage of me,” Davis said. “I think he is making a mistake. It’s not just the height. He thinks he’s stronger than me, so we are just going to have to wait and see. If he believes that I’ve never seen anyone like him, then so be it. But they always learn on fight night. That’s when the real me comes out.”

Follow along with Brett Okamoto and Michael Rothstein as they recap the action from the biggest boxing cards of the night.

Beterbiev on Facing Usyk: No Problem, He’s a Good Fighter
Sulaiman threatens to block Beterbiev vs Bivol due to Russia sanctions
Richardson Hitchins Believes He Should Be Headlining His Own Shows
If Joshua can’t get a title fight, he’d consider Ngannou
George Warren reacts to an incredible Fight of the Year between Artur Beterbiev and Anthony Yarde 🥊