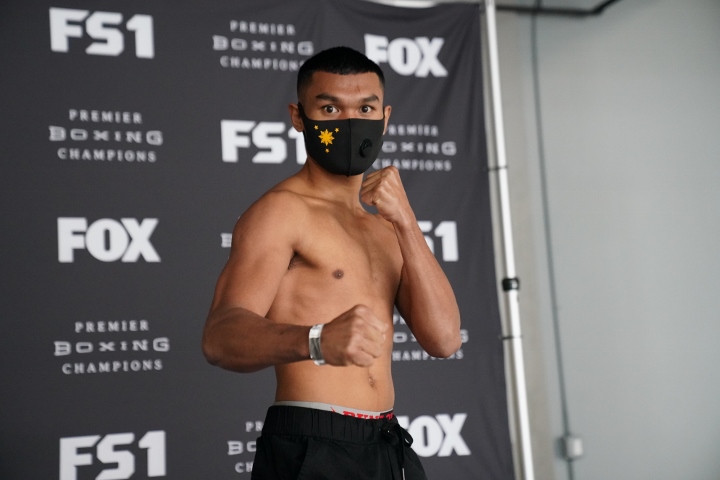 Omar Juarez suspected he was in for a tough fight in a difficult style matchup.

Few expected it to result in the first loss of his career.

All Rivera provided fits all evening in earning a ten-round majority decision win over Juarez. Judge Scott Erickson (95-95) scored the contest a draw, overruled by judges Octavio Rodriguez (95-94) and Kyle Shiely (95-93) who ruled in favor of Rivera in their Fox-televised opener Sunday evening at The Armory in Minneapolis, Minnesota.

Juarez jumped out to a strong start, letting body shots and right hands fly while also keeping Rivera on the outside whenever it was time to play defense.

Rivera made his presence felt in round two. Both boxers landed often in a high-contact round, though perhaps no punch more effective than a straight left from Rivera to produce a mouse under the right eye of Juarez.

The fight grew increasingly uncomfortable for Juarez, who struggled with the aggression and roughhousing tactics offered by the Filipino southpaw. Ironically, it took for the fight’s dirtiest moment to turn the tide for the unbeaten Texan.

Rivera was issued a hard warning by referee Mark Nelson early in round four after burying his shoulder in Juarez’s midsection and driving him to the canvas. Juarez shook off the sequence, though favoring his left rib upon rising from the canvas. Rivera paid the price moments later, as he was rocked by several straight shots upstairs along with a digging left hook to the body.

Juarez served as the aggressor in the ensuing rounds, though Rivera never backed down. Juarez was still landing more punches and at a higher connect rate but far too often failed to stay on the attack for all three minutes of a given round. Rivera capitalized, picking his spots and taking the fight to Juarez.

Time was called in round seven after Juarez absorbed a left uppercut well south of the border. Another warning was issued, and once again prompting an immediate reaction from Juarez in the form of combination punching. Rivera closed the round strong, smothering the 22-year-old and landing left hands on the inside.

Juarez landed the cleaner punches throughout round eight. Rivera was unfazed by the incoming, often having a response though not always finding the desired target.

Round nine was easily the worst of Juarez’s career to date. The unbeaten prospect connected with a right hand but literally walked into a counter right hook to force him to a knee. Juarez had the wherewithal to cover up while on the canvas, with the referee very slow to separate the boxers as Rivera landed another left hand to drive Juarez backward while already down.

With the fight seemingly on the line heading into the final round, Juarez punched sparingly while Rivera looked to close the show on a potential upset. Both fighters landed upstairs, with Rivera once again bullying his way inside and driving Juarez to the ropes through means other than clean punching.

Rivera picks up by far the biggest win of his ten-year career. He improves to 22-5 (18KOs) with the win, bouncing back strong after a lopsided points loss to Rances Barthelemy in a lethargic effort this past January in Los Angeles. The win is also his first on U.S. soil, having also suffered a 1st round knockout to Malik Hawkins in September 2019.

Juarez falls to 11-1 (5KOs) with the defeat. The setback comes on the heels of an active stretch, fighting five times since the pandemic. Sunday’s bout was perhaps too ambitious a leap, as he comes up short though will undoubtedly learn from the experience.