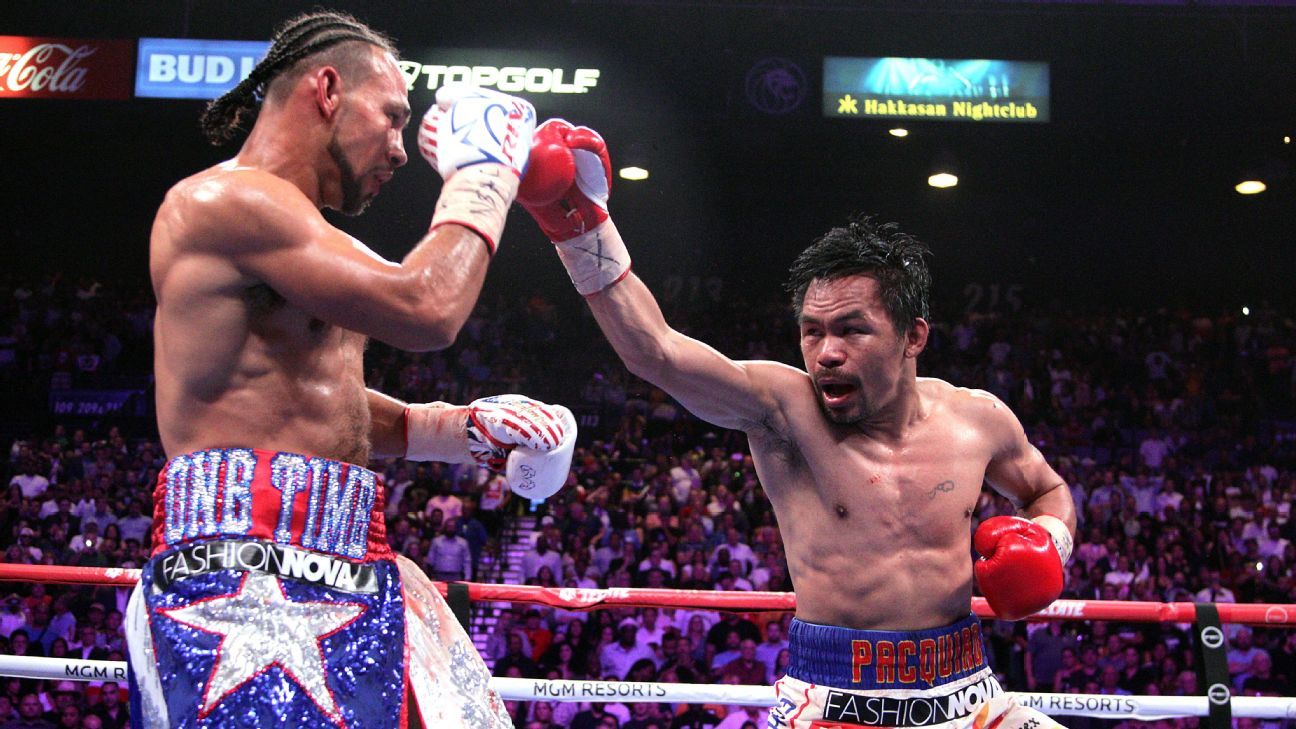 On Saturday, amidst a night of tremendous performances and knockouts by Gervonta Davis and Vasiliy Lomachenko, news broke that Paradigm Sports Management filed a multimillion-dollar lawsuit against Manny Pacquiao — alleging breach of contract, and attempting to obtain an injunction to stop Pacquiao from fighting Errol Spence Jr. on Aug. 21 in Las Vegas.

After seeing what a judgment in the courts did to the planned heavyweight world title unification fight between Anthony Joshua and Tyson Fury, should fans be worried about the lawsuit from Paradigm — which also represents Conor McGregor — keeping Spence-Pacquiao from happening as scheduled, or at all?

Speaking of Davis, his performance after jumping up two division was tremendous, if a bit nervy at the outset. Where exactly does he stand in the hierarchy at 130, 135 and 140 pounds, and could he already be the second best in any — or all — of those weight classifications?

Lomachenko’s future falls squarely in the middle of those divisions, as a sudden change of heart from the Lopez clan seems to have put Lomachenko on track for his much-desired rematch against the younger Teofimo Lopez with all of his world titles on the line. With the date of Lopez’s fight against George Kambosos Jr. in limbo following postponement from its original date due to Lopez’s ongoing COVID diagnosis, could Lomachenko take a fight in the interim to stay sharp after one of the best performances of his career?

Finally, with full title unification off the table for now, Joshua is set for a defense against mandatory challenger Oleksandr Usyk on Sept. 25. Could Usyk, the former undisputed cruiserweight champion of the world, spoil Joshua’s shot against Fury or Deontay Wilder before it can happen?

Our panel, comprised of Bernardo Osuna, Brett Okamoto, Michael Rothstein and Nick Parkinson, digs into the latest headlines and separates what’s real from what’s not.

Osuna: Not real. I’ll believe that Spence-Pacquiao is happening when I see them standing in the ring across from one another. Keep in mind that Paradigm already intervened to nix a potential Ryan Garcia-Manny Pacquiao fight, and PBC stopped Tyson Fury and Anthony Joshua from happening, so both parties understand the risks of making a fight when there are legal ends to tie up.

Pacquaio has been known to enlist multiple parties for representation when negotiating a fight in the past. I think they all had Manny’s best interest in mind in trying to make the fights happen, but Paradigm is interested in making themselves money, not in the business of appeasing Pacquiao. That’s what really worries me about this fight — I don’t know if Paradigm has done anything for Manny yet, and I don’t know that Manny has done anything for Paradigm. They’re still in a relationship, but what do they have to offer each other? The anticipated Conor McGregor-Manny Pacquiao fight never materialized and this relationship really never got off the ground.

Will Pacquiao be allowed to fight before these legal situations are resolved? It’s not a cut and dry case. Maybe Paradigm is deemed to be in the right and they can’t fight, or maybe they allow the fight to happen and Paradigm gets their cut after the fact? We’ll have to wait and see how this plays out in the courts, and that might take a while, which could cause this fight to be delayed or even cancelled.

Rothstein: Not real — but he is in that conversation at 130 and 135. Davis is a heck of a fighter, and I put him on my latest ballot for ESPN’s pound-for-pound top 10. And he was, eventually, impressive Saturday night in his 140-pound debut. But to call him the second-best fighter at 140 would be to ignore Jose Ramirez, Regis Prograis and others. He could get there some day, and a couple of years from now, a fight between Davis and Josh Taylor could be fascinating if Taylor still holds his belts. But Davis is still too new at 140 and there are too many other good fighters in the division to say that.

Even at 135 it could be a stretch to say for certain he’s the second-best. Is he in the conversation with Vasiliy Lomachenko, Devin Haney and others behind Teofimo Lopez? Without a doubt. But is that definitive? Not close. At 130 pounds it’s probably between him and Shakur Stevenson as the second-best in the division behind Oscar Valdez, but there’s talent there, too.

Understand, this is not any sort of disrespect toward Davis and what the 26-year-old has been able to do so early in his career. That he’s been able to be effective at three divisions is impressive, and it’s why I consider him one of the top 10 overall fighters. But for him to be considered one of the two best active fighters in three separate divisions, he needs to fight some of the top guys in each space.

While Floyd Mayweather and Leonard Ellerbe have clear plans for Davis and they’ve done a great job with him thus far, Mayweather saying Saturday night they want to stick with Mayweather and PBC fighters is concerning, considering Lomachenko, Lopez, Stevenson, Valdez, Taylor and Ramirez are all with Top Rank, and Haney is with Eddie Hearn.

Of the PBC/Mayweather options, Prograis is the best at 140, along with Mikey Garcia and Robert Easter Jr. at 135, and Javier Fortuna at 130. But so many top fighters in those divisions are away from PBC and Mayweather, so hopefully at some point we’ll start seeing some of those fights.

When that could be part of the big plans Mayweather and Ellerbe have for Davis, though, is anyone’s guess.

Okamoto: Not real. There’s no need. Saturday might have been the best performance of Lomachenko’s career. What’s he need a tune-up for? And as of right now, the wait shouldn’t be too long for the rematch. Lopez’s father, Lopez Sr., went so far as to suggest a rematch could happen as early as December. That might be a little optimistic, as Lopez’s true condition considering his recent COVID-19 diagnosis remains to be seen, and his delayed fight against George Kambosos Jr. doesn’t even have an official date yet. But in all likelihood, assuming Lopez gets by Kambosos, Lomachenko would be looking at his potential rematch in the first quarter of 2022.

The rematch is lucrative and exactly the fight Lomachenko wants — so why, at age 33, would he rush to book another fight in the meantime? Of course, I’d expect Lomachenko to monitor the Lopez situation — when the Kambosos fight ultimately takes place, and how Lopez performs in it — but unless something changes the timeline of the rematch, Lomachenko said he’s waiting for Lopez and I believe him.

Parkinson: Not real. There is no argument about Usyk’s sharp skills, ring IQ and foot movement, which helped him win all four cruiserweight world titles. But after just two fights at heavyweight, stepping up to challenge a bigger, back-in-form Joshua on Sept. 25 may be a bit too soon in Usyk’s heavyweight existence.

Usyk (18-0, 13 KOs), 34, has made a steady rather than stunning start at heavyweight, against opponents who were not a serious threat to the lofty position in the rankings he was granted thanks to his success as undisputed cruiserweight world champion. Usyk did not batter his two heavyweight opponents — Chazz Witherspoon and Dereck Chisora — with earth-shuddering power. Nor did he look particularly fluent against Chisora, 37, in a unanimous points win in October.

Witherspoon, 38, was a late-notice opponent for Usyk’s heavyweight debut in October 2019, and the American retired, exhausted, at the end of seven rounds. Chisora was more of a risk and Usyk was well in control by the fifth round, but it was not a huge statement of intent; two of the judges only scored it in Usyk’s favor by two rounds.

Joshua, who watched the Chisora fight from ringside, was perhaps left thinking that now is a good time to face Usyk, rather than later when the Ukrainian has acclimatized better to life as a heavyweight. Joshua also has good boxing skills of his own — like Usyk, he won gold at the 2012 Olympics — and along with his size (Usyk weighed in at 217¼ pounds for Chisora; Joshua tipped the scales at 240¾ pounds for Kubrat Pulev in December) and form (Joshua destroyed Pulev in the ninth round), Joshua is most likely going to keep hold of his three titles.

Zepeda vs Prograis: Live updates and results, 9 pm ET
Fury: My body isn’t what it used to be but boredom convinced me to keep fighting
Whyte outpoints Franklin in later rounds for win
DILLIAN WHYTE UNHAPPY WITH ANTHONY JOSHUA…👊🏼❌ #shorts #anthonyjoshua #dillianwhyte
Breaking down the trilogies: Who has the edge in Fury-Chisora and Chocolatito-Estrada?