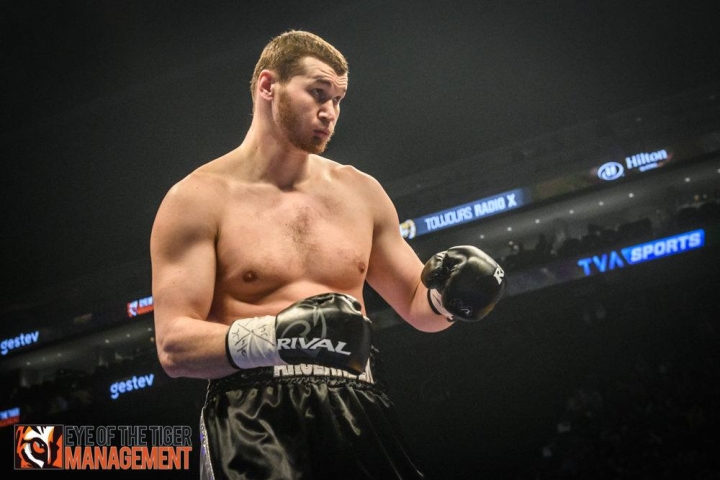 Highly regarded Russian heavyweight prospect Arslanbek Makhmudov will return to the ring on July 23 in a headliner against Pavel Sour of the Czech Republic at the Hotel Holiday Inn in Cuernavaca, Mexico, Makhmudov’s co-promoter Eye of the Tiger Management announced Tuesday.

Makhmudov ( 11-0, 11 KOs) is regarded as one of the deadliest punchers in the heavyweight division, but his career, like many others, has slowed due to the Covid-19 pandemic and certain promotional hurdles. This will be his first fight since last October, when he stopped overmatched Dillon Carman (14-6, 13 KOs) with one punch seven seconds into the opening round.

Makhmudov, 32, lives and trains out of Montreal, where he is coached by local boxing fixture Marc Ramsay, the trainer of Russian WBC and IBF light heavyweight champion Artur Beterbiev.

Although his opponent cuts a large profile at 6’5”, Sour (13-4, 8 KOs) is a staunchly journeyman-level fighter. In the past, he has come up short against the likes of Hughie Fury and Nathan Gorman, losing both by technical knockout.

“It is essential for us to have Arslanbek box as often as possible so that we can position him for a world title bout,” said Camille Estephan, the president of Eye of the Tiger. “He possesses everything you need to become a heavyweight champion and that is also why he is avoided by the top fighters in his division.

“Sour is a boxer that has faced the best names and who will provide a good point of comparison for Makhmudov. This fight is important in this regard, and Arslanbek must win so that he can continue on his ascent up the ladder. My goal is for him to acquire experience, whether he fights against a big name or not. We have every intention of bringing him to a world championship.”

Makhmudov appeared to be on the cusp of new heights when he signed with promoter Golden Boy last year, with the intention of introducing himself to the American market. But the two sides decided to part ways earlier this spring after it became clear to Estephan, who has had a longstanding relationship with the promotional group through Quebecois native David Lemieux, that Makhmudov was not being moved at the pace that he wanted.

The undercard will feature the professional boxing debut of Turkish kickboxer and Olympian, 28-year-old Mehmet Naidr Unal, who is also trained by Ramsay.

“We have been talking with Mehmet Unal for quite some time now, and I am convinced that one day we will accomplish great things together,” said Ramsay. “He has a style that will please the Quebecois fans for many years to come.”

Russell vs Barthelemy HIGHLIGHTS: July 30, 2022 | PBC on Showtime
The Man Behind the Art
Jake Paul To Pay Undercard Fighters 50% Of What They Would Have Earned On August 6th Card
Tyson Fury Says He’s Returning to Boxing, And That Isaac Lowe Is His New Trainer
Bunch vs Roldan headlines Sept. 9 ShoBox tripleheader