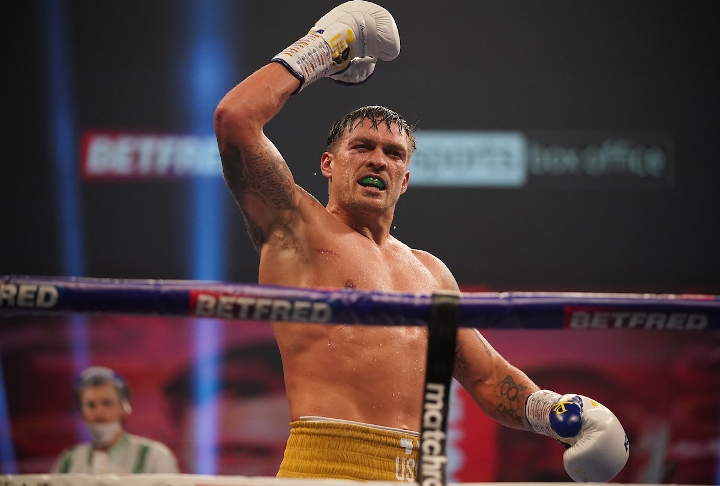 In the final fight of his pro career in 2018, Bellew was brutally knocked out by Usyk.

Usyk unified the entire cruiserweight division, and then officially moved up to heavyweight in 2019.

After two bouts in the division, Usyk is now on track to face IBF, IBO, WBA, WBO world champion Anthony Joshua, with the target date of September 25.

In order to prepare for this fight, Usyk has linked back with the father of three division world champion Vasiliy Lomachenko.

Joshua is the big favorite – especially after Usyk showed some vulnerabilities in last October’s decision win over Derek Chisora.

“It’s a hard fight, I’m not gonna lie. It’s a very, very hard fight. If anything, it’s just got even harder because Usyk has now gone back with Lomachenko’s father. That makes it even harder because they will create a game plan that is gonna try and negate everything good that Anthony Joshua does,” Bellew told Talk Sport.

While Bellew views the bout as a dangerous encounter, he backs Joshua to come out on top after a rocky start in the first half.

“I think Anthony Joshua will be down on points when he catches up with him,” Bellew said.

Joshua was in action back in December, when he knocked out another mandatory challenger, Kubrat Pulev of Bulgaria.

Video: Fury and Usyk go face-to-face after Chisora bout
Ennis vs Chukhadzhian leads Davis vs Garcia PPV undercard
Eimantas Stanionis vs Vergil Ortiz purse bid scheduled for Dec. 12
Fury vs. Chisora: The Timeline (Or: How did we get here?)
Regis Prograis On Teofimo Lopez: “I Really Do Feel Like I Can Hurt Him…Like He’s Going To The Hospital”