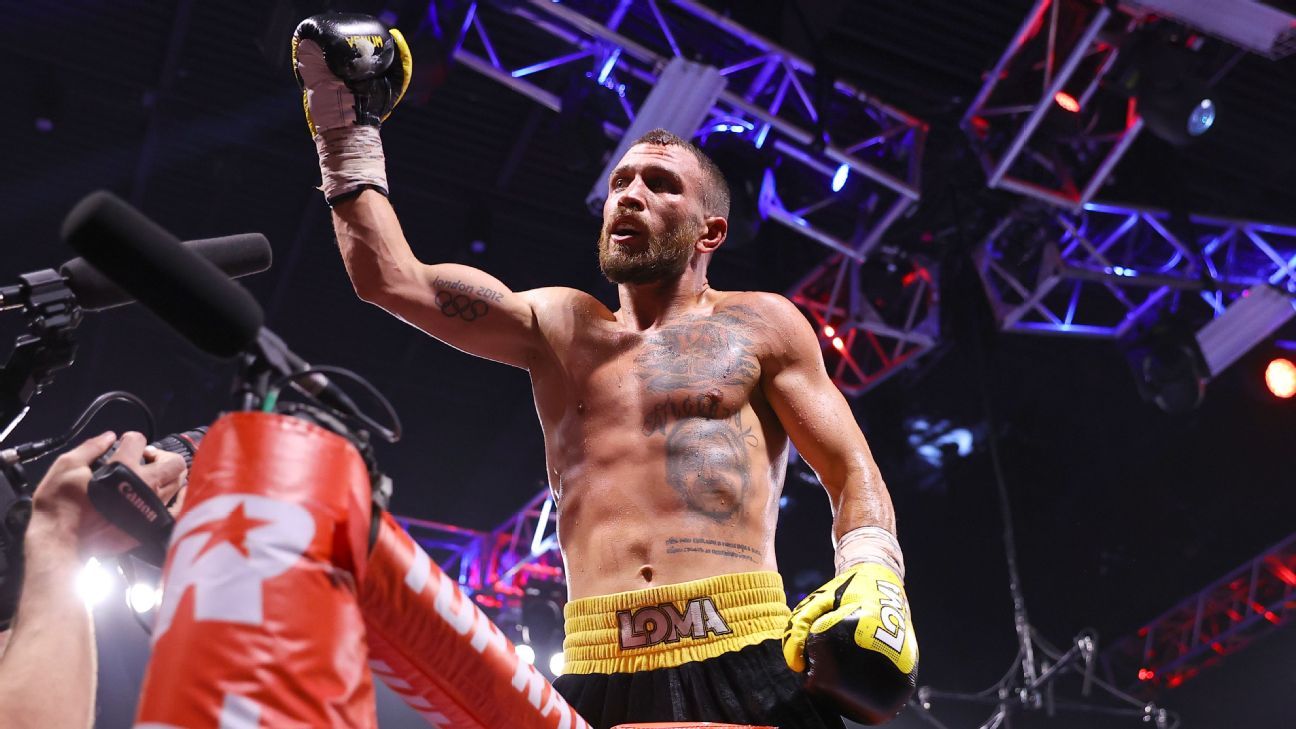 Former pound-for-pound king and lightweight champion Vasiliy Lomachenko returned to the ring for the first time since losing to Teofimo Lopez in October 2020 and reminded the boxing world that he’s still one of the best fighters in the sport. Lomachenko scored a dominant ninth-round TKO victory over Masayoshi Nakatani on June 26, showcasing what the Ukrainian can do when he’s at his best.

Lomachenko, who underwent right shoulder surgery after the loss to Lopez, seemed to have the speed and power of the old Lomachenko, moving and sliding which made Nakatani miss time after time.

In reaction to the Nakatani performance, boxing trainer and boxing analyst Teddy Atlas, moved Lomachenko up one spot over Errol Spence Jr., nothing that the way he won, “deserves and upgrade.”

“After the loss to Teofimo I dropped him a little bit, obviously, and it was the right thing to do,” Atlas said. “And it is the right thing to do now also, to move him up, when he comes back and looks like the fighter he was before. I’m not gonna put him in front of everybody else, not back to No. 1 just yet, but he beat a solid fighter, a guy that was the first one to go 12 rounds with Teofimo, gave Lopez a little bit of trouble, then he came back to knock out Felix Verdejo.

“Lomachenko faced a decent fighter and made him look like he didn’t belong in the ring with him. He took him apart, piece by piece, and did it in such a spectacular way, such a Lomachenko way that I just think that he deserves to move up.”

“If Lomachenko beats Lopez, then he moves up,” said Bradley. “He needs to beat Lopez, and that fight has to happen in the near future, so I’m gonna keep Loma where he is and not move him up. If Lomachenko goes up to 140 and beats a champion there or a guy there with a credibility, then I’ll think about moving him up.”

ESPN boxing writer Mike Coppinger also ranked Lomachenko at No. 8, and said the kind of performance he displayed against Nakatani is what he needs to keep doing to get back on top.

“On the heels of his biggest setback yet, Lomachenko was ruthless and more aggressive than ever in breaking down Nakatani,” said Coppinger. “He never stopped pressuring and if he’s going to exact revenge over Lopez in a rematch, that’s exactly the style he’ll need to employ.”

In another fight this past weekend, Gervonta Davis defeated Mario Barrios to win a WBA secondary junior welterweight belt. Davis currently has titles in three different divisions, 130, 135 and 140 pounds. Many voters, including Atlas and Bradley, decided to move Davis up, but he came up short of the top 10, just behind junior bantamweight champion Juan Francisco Estrada.

Davis stopped Barrios and looked like a “complete fighter,” according to Atlas.

“I thought Davis was tremendous, I don’t think he got enough credit for the way he did the things he did against Barrios — he broke him down,” said Atlas. “Everybody looks at ‘Tank’ Davis like that, like a thank because he’s short and powerful and people look at him like a guy that is going to try to run you over and try to knock you out, but against Barrios he looked like a very complete fighter, he really did.

“He knows how to close the gap, just like Manny Pacquiao did when he was young, with the right hook, very quickly and explosively. He knew how to get in the pocket and land his body shots beautifully against Barrios, by staying calm, by timing the punches while Barrios was punching, he knew how to get away from the punches, specially the right hand that Barrios was trying to land. It really was a great display by a guy that is more than just a powerful guy. That’s why I moved him into the elite 10.”

Note: Results are through July 1.

How our writers voted

When you see a fighter fall face first, you know he got hit with a BIG punch 😳. #LenierPero
McGregor offers to sponsor Taylor’s Ireland fight
Bazinyan vs Fox: Live updates and results, 7 pm ET
Artur Beterbiev-Oleksandr Usyk? Beterbiev Doesn’t Think It’s Out Of The Question
Bunce Diary: If you want a boxing tag team, look no further than Alexander, Samuels, Brodie and Swain