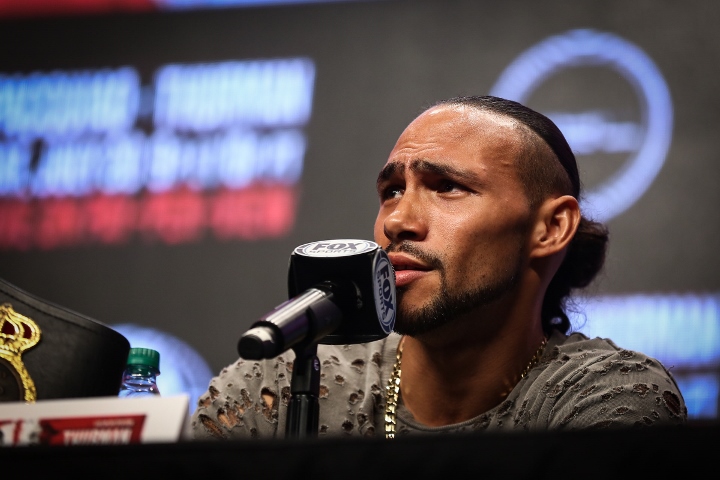 Welterweight contender Keith Thurman (29-1, 22 KOs), 32-years-old, has been out of the ring since July 2019, when he lost a twelve round split decision to Manny Pacquiao at the MGM Grand in Las Vegas.

Despite his absence from the ring, there has been no shortage of boxers calling him out – especially up and coming contenders like dangerous puncher Vergil Ortiz (17-0, 17 KOs).

Ortiz is being lined up to face another puncher, Egidijus Kavaliauskas, on August 14 at the Ford Center In Frisco, Texas

However, Thurman is looking to secure much bigger game than Ortiz.

“I got my eyes geared towards the biggest fights at 147, I would say that he has to climb the ladder a little bit more, but only because he’s gunning after me,” Thurman said to Fighthype.com.

“I’m not gunning after him. I’ve got my gun barrels aimed at different targets, mainly world champions, because I want to get back to the world champion status. I’m glad that he’s got the fire, and the passion, and the grit to call me out. I’ve seen a little bit on the boy, I can’t speak much, because I haven’t seen much, so I’m not going to go deep into anything there. But he definitely shows potential, lets his hands go. He seems like he’s a power puncher, seems like he can hurt.

“He seems a little wide still, a little open still, but besides that, it’s a good fight. I remember being a young dog. When the young dogs are barking, and they’re hungry, it’s one thing to have a barking dog, but it’s another thing to have a hungry barking dog. Let’s just see what happens with the boy and his career. You know with me, if I get the phone call and his name, any name is presented to me, on a list, then that’s the legitimacy of me potentially seeing them in the ring. I’ve only seen this kid in the ring due to the callout. But besides that, I haven’t seen much from this kid.”

Another fighter who wants to face him is Jaron Ennis (27-0, 25 KOs), who a few months ago blew away former world champion Sergey Lipinets.

But, Thurman claims to have never heard of Ennis.

“The young man that you just mentioned, he might be on Showtime – I’ve never heard of him. Lipinets really never impressed me, though, and I think a lot of people started figuring his style out, I think it was very one-dimensional,” Thurman said.

“So if somebody handled him, good, it’s about time, I think Lipinets got through too many people anyways, so it is what it is.”

The top 10 world champions named Joe
Esparza: I Think A Rematch With Seniesa Estrada Will Be Bigger Than Taylor-Serrano
Jake Paul: I Was Ready To Go To 205 To Fight Rahman; These Guys Are Con Artists
Chris Small: Drawn to Boxing
Marlen Esparza Defeats Eva Guzman On The Cards