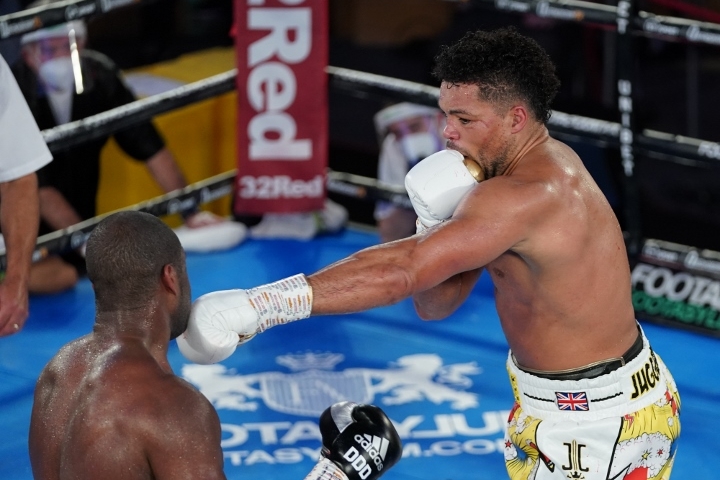 LOGIC DETERMINED THAT it was Daniel Dubois who chose to remove himself from the firing line and take a knee in the 10th round of his huge domestic showdown against Joe Joyce in November.

Joyce, quite understandably, begs to differ.

The defeat of Dubois is the hallmark name on the record of the 2016 Olympic silver medallist, who is 12-0 with, officially, 11 thudding KOs. He had mixed in good company previously, but Dubois was the young, unstoppable force who pundits picked to knock the Juggernaut off-course.

It turned out that it was the Big Juggernaut who was in indestructible mode and his reward is another marquee name in Carlos Takam on July 24 at the SSE Arena, Wembley, as he hunts down a world title shot later this year or next.

For Joyce, it is big nights only from now on and Takam more than fits the bill, with the muscle-bound Frenchman respected as a dangerman of the division with 28 KOs to his name. With his heavyweight CV being 47 fights deep, the Cameroon-born banger is only one short of having had four times as many professional contests as the 35-year-old Joyce.

Whether he can make such experience count remains to be seen.

Meanwhile, Joyce was all for having a last look back at the fight that transformed his career and also the public’s perception of his place in the heavyweight pecking order.

Joyce points out that he has stunned somebody before without actually touching them, but insists Dubois was feeling the effects of a ramrod jab.

“I saw a guy run into a tree once after I looked at him!” recalled the popular Putney native. “Well, it was from my jab – full body weight jabs! Apparently people were saying it was earlier in the fight that did the damage, but that last shot was a full-powered shot and Dubois must have felt something go in his eye and thought he’d had enough.”

But was it always the objective to bring about the downfall of Dubois via unusually nimble footwork and a crispy jab?

“I always work on the jab because it is the most important shot. When something is working and landing every time you stick with it. It wasn’t the plan and there were other combinations I was going to do.

“Perhaps if it wasn’t stopped then I would have to have picked it up in the last couple of rounds – especially knowing I was down.”

Indeed, Joyce was behind on the cards at the time of the stoppage, even though he believed himself the dominant force throughout the fight.

“I was well comfortable in there! Dubois was coming forward throwing his shots for a little burst of about 30 seconds and for the whole fight he was breathing heavily and couldn’t really keep up with the pace. I was nullifying his power and moving away from his shots, meanwhile landing my jab every time with accuracy and force.”

Joyce acknowledges that he had to resist approaching the fight in his traditional fashion of marching forward and being prepared to take a shot or two to land his own.

Recalling some pre-Olympic sparring with the now WBA Interim champion reminded him that freely trading leather wouldn’t be in his best interests.

“Yeah Dubois definitely has power and I felt it even before the Rio Olympics. He landed a big shot and I definitely felt it in sparring. I was seeing a few stars and I’ve always known he has that strength.

“But that is not the only thing in boxing and you have to have other attributes – rely on your strengths and work on your weaknesses.

“Styles make fights and you have to know what your opponent’s particular style is going in there and that is why you need a coach who can read that and you work on it in training. It would be different for every fighter tactically.

“Me being tactical is reserved for certain fights! I do enjoy a tear-up but I was not going to come charging in and get knocked out.”

Dubois returned to his trail of destruction in June following his recovery from orbital injuries and the usually resolute Bogdan Dinu was chopped down half a minute into the second round.

Joyce was pleased for his younger rival, but couldn’t match the obvious delight of Dubois himself, who showed a rare display of emotion.

“He was so happy about his last win – I have never seen him so happy!

“Taking a first loss is hard, especially when you have been built up so well and everyone expects you to win. He does have dynamite in each hand but I think there is a point where you get built too much and become complacent.

“Then you are built for a bigger fall and it happens a lot with British fans. I remember with David Price, he was the next great big thing and then he lost to Tony Thompson, then lost again. They build you up and really slate you when you fall.

“Daniel is showing that you can have a loss, come back and get back on the wagon.”

Donaire Vows To Continue Career, Eyes Chocolatito and Ioka Fights
Ryad Merhy May Move Up in Weight, Fight With Makabu is Now Off
Boxing TV schedule for Aug. 11-13
Jake Paul To Pay Undercard Fighters 50% Of What They Would Have Earned On August 6th Card
Joe Joyce Will Aim To Stop Joseph Parker, Vows To Keep KO Streak Going