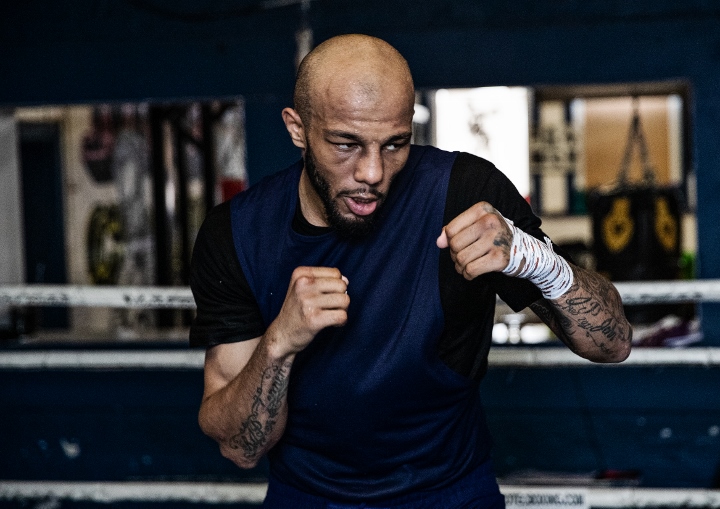 LYNDON ARTHUR SAYS the world title winning exploits of his boxing ‘twin’ Sunny Edwards has proved an inspiration and an achievement he is eager to emulate.

Sunny, of course, seized the IBF flyweight world title in a sensational fashion with a fleet-footed masterclass against the South African legend Moruti Mthalane in April. His nimble footwork and rapier-like array of shots saw to it that a glittering red belt was soon being couriered to his doorstep in Sheffield.

The 25-year-old world champion ventured across to Manchester this week to the famous Collyhurst and Moston gym, where the uncompromising headmaster is former European champion, the Black Flash, Pat Barrett.

One of Barrett’s star pupils is one of Britain’s and the world’s leading light heavyweights, who is known in boxing circles as King Arthur. Lyndon catapulted himself to the forefront of the division with a display of precise punch picking in his December showdown against big domestic rival Anthony Yarde in London.

The 30-year-old WBO Intercontinental and Commonwealth champion returns to the capital next Saturday (July 10) when he headlines the show at the Royal Albert Hall, taking on the unbeaten, 15-0, Italian Davide Faraci, live on BT Sport.

Inseparable amateur teammates Lyndon and Sunny were back in tandem as the light heavy was put through his paces by Barrett on Wednesday and the older of the pair reflected that he cannot fail to be inspired by his flyweight friend.

“Sunny, man, it was great, wasn’t it,” considered the 18-0 man. “It was just a great thing, I am a bit lost for words, it was just mad and amazing. I’ve watched him coming from ABA finals – and he got beaten in one of them – to the pinnacle of professional boxing.”

The typically reserved – publicly, at least – Lyndon doesn’t give much away at the best of times, but he was visibly ecstatic following Sunny’s triumph. Much more so than after his own successes.

“It is not just me,” he explained. “I know with a lot of boxers, you tend to get more excited about your friends or family fighting than you do about yourself. My reaction showed my feelings.

“It was crazy in the sense that we met on GB (elite amateur squad) and we just clicked straight away and have kept as friends and now we are both here.”

The obvious question remained. How did the quietly eloquent and imposing light heavyweight end up in cahoots with the impish – and some might say outspoken – flyweight?

“Have you seen the film Twins? It is the same sort of thing and we naturally bounce off each other and have done since we met. It just happened organically, it was not forced and we have stayed friends and had a strong relationship ever since.”

Away from his Sunny outlook, Lyndon has a job on his hands against Faraci next week and he is not underestimating the task.

“I have watched a few of his fights and he is a threat. I am the key to his world title shot and his lottery ticket, so to speak. He will take this fight more seriously than any other so I have to be ready.”

Donaire won’t retire, plans move to 115 for Chocolatito or Ioka next
Canelo: “Crawford Is A Better Fighter” Than Spence
McKinson gets long-awaited crack at Ortiz
Ryad Merhy May Move Up in Weight, Fight With Makabu is Now Off
Wilder Manager: A Joshua Fight is Enormous Even If He Loses To Usyk