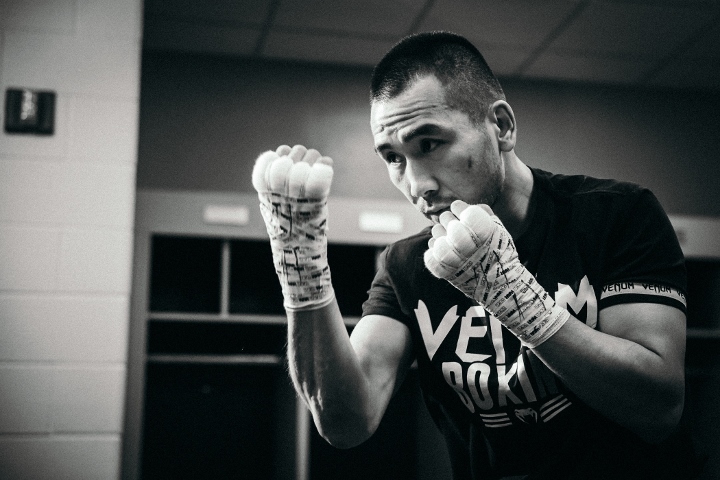 Tugstsogt Nyambayar’s introduction to junior lightweight division comes on the heels of the division’s biggest star further elevating his place in the sport.

This weekend’s Showtime main event pits Brooklyn’s Chris Colbert (15-0, 6KOs) versus Mongolia’s Nyambayar. At stake is Colbert’s WBA “Interim” junior lightweight title, which—while not a true world title—does ensure the winner has a place in line at three-time 130-pound titlist Gervonta ‘Tank’ Davis (25-0, 24KOs), who is coming off of an explosive eleventh-round knockout of Mario Barrios (26-1, 17KOs) atop a June 26 Showtime Pay-Per-View.

“It was a very good performance by Davis,” Nyambayar told BoxingScene.com. “He’s very good, I really like his style. Down the road, that is definitely the fight to make.

Davis-Barrios took place in the 140-pound division, though with Davis’ handlers insisting he is the biggest draw at three weights—130, 135 and 140. The claim lends the suggestion of his intention to drop back down in weight for the right opportunity, which could put Saturday’s winner in a very good position down the road.

Of course, Nyambayar still has to prove himself at a new weight. The 2012 Olympic Silver medalist has fought at junior featherweight and featherweight throughout his lone career, with his lone loss coming in a bid for Gary Russell’s WBC featherweight title last February.

‘King Tug’ has since returned with a 12-round win over Cobia Breedy last September, scoring two early knockdowns but fighting through an injury for the rest of the fight in claiming a split decision. He hasn’t fought since but was training for a potential opportunity at featherweight when the call came to replace an injured Yuriorkis Gamboa for this Saturday’s Showtime headliner from Dignity Health Sports Park in Carson, California.

It’s a risk but a calculated one and with plenty of upside. Premier Boxing Champions (PBC) boasts plenty of talent in and around the 130-pound division, none bigger in stature than Davis.

“We will see what happens this weekend,” said Nyambayar. “But down the road, that is the fight I would like to make. That is a future goal of mine.

” For now, it’s about beating Chris Colbert and seeing how I feel at this weight.”

Bill Haney calls Teofimo Lopez Sr, says their sons can fight next
Crawford vs Avanesyan undercard: Cris Cyborg, more set for Dec. 10
Dillian Whyte: Deontay Wilder Is Cowardly Con Man, Biggest Fraud In All Of Sport
The Beltline: Is boxing the easiest sport in the world?
Prograis: I really feel like boxing world did me dirty after loss to Taylor