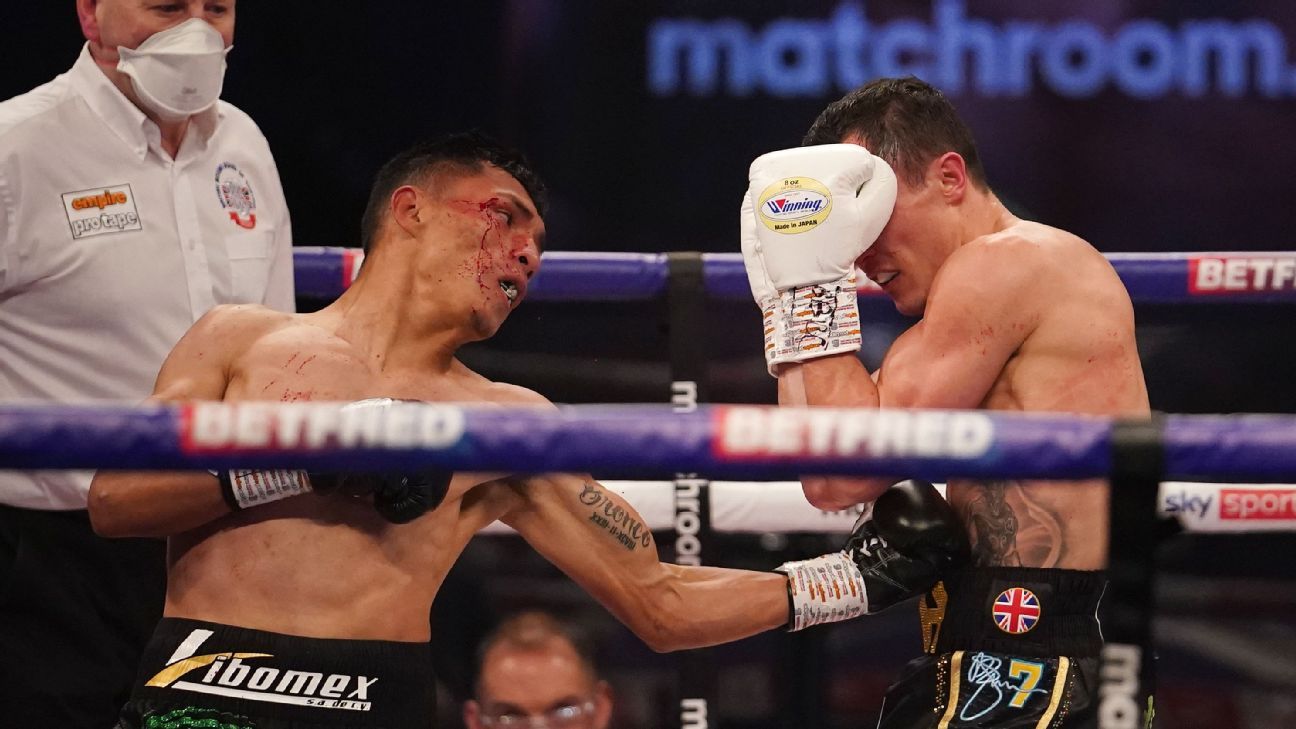 The bout will be streamed worldwide on DAZN with Katie Taylor defending her undisputed lightweight championship in the chief-support bout in an event promoted by Matchroom Sport’s Eddie Hearn.

When they met in February, the bout was viewed as a stay-busy fight for Warrington, ESPN’s No. 1 featherweight at the time. Warrington relinquished his IBF title in advance of the fight, he said, to focus on a big opportunity — a title fight against Xu Can — rather than a mandated rematch with Kid Galahad.

That opportunity never came. Instead, Lara shocked Warrington, battering him from the opening bell with knockdowns in the fourth and ninth rounds en route to a stoppage later in that frame.

The victory is the front-runner for upset-of-the-year honors and was recognized as the biggest boxing surprise this year in ESPN’s midyear awards. After all, Warrington was a 25-1 favorite; Lara was a lightly regarded brawler from Mexico.

Instead, Warrington received a brutal beatdown, the kind of fight that often leaves lasting effects on the loser. But Warrington insisted on the immediate rematch and will look to exact revenge in his hometown of Leeds before an expected sell-out crowd of 20,000-plus.

“Obviously, I’m hurting inside,” Warrington said days after the defeat. “I’ve lost my unbeaten record. That’s something I have treasured and it is a dent. Anyone who knows me can tell you I stand proud.

“Good luck to Mauricio Lara who is a serious opponent for anybody. He is heavy-handed and holds power that will trouble any featherweight. Will we meet again in a boxing ring? Who knows. We only fought a couple of days ago. But if the chance comes I will jump at it.”

Lara (22-2, 15 KOs) is now ESPN’s No. 4-rated fighter at 126 pounds, with Warrington one slot behind him at No. 5. Another win and Lara will be well-positioned for a high-stakes showdown with fellow Mexican Emanuel Navarette.

Warrington (30-1, 7 KOs) was building an impressive resume at featherweight before the setback. The 30-year-old racked up victories over Carl Frampton, Galahad and Lee Selby, all top-10 fighters. Warrington was also in talks to fight Shakur Stevenson at one juncture.

But now, he desperately needs a win over his conqueror if he hopes to regain that status as not just one of the best fighters in the world, but one of the fastest-rising attractions in the U.K.

“I think Josh Warrington needed to know that this fight wasn’t going to be easy,” Lara, 23, said in his post-fight comments. “He shouldn’t have been making plans for future fights.”

Warrington surely knows now. And he won’t be the only draw on the card as Irish star Katie Taylor (18-0, 6 KOs) will defend her undisputed 135-pound championship in the chief-support bout. The Olympic gold medalist topped Natasha Jonas in May via unanimous decision.

The Sept. 4 event figures to be the highest-profile card of Hearn’s new exclusive partnership with DAZN in the U.K., a five-year deal that begins later this month.