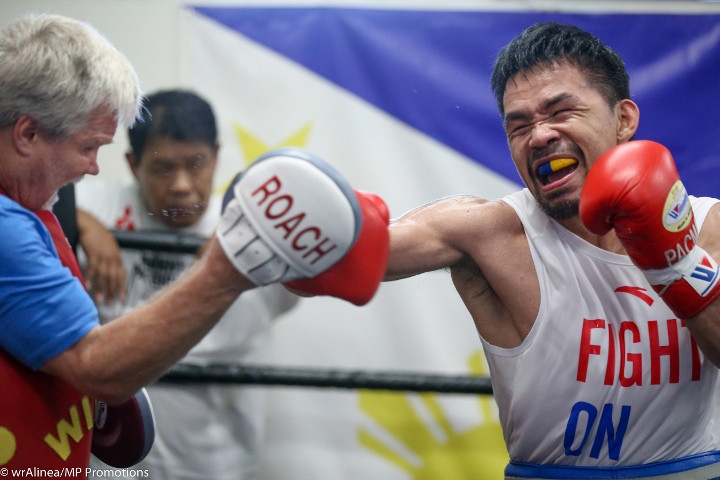 Eight-division world champion and boxer laureate senator Manny Pacquiao began his first U.S. training camp in nearly two years today and it seemed like he picked up right where he left off when he dethroned WBA welterweight champion Keith Thurman on July 20, 2019, tagging the defending champion with his first loss.

One day removed from arriving from the Philippines, Manny began the day with a five-mile morning run and 1,000 sit-ups.

Before heading to Wild Card Boxing Club, in Hollywood, for his afternoon training session with world-famous Freddie Roach, Manny was given a random drug test from VADA (Voluntary Anti-Doping Association) at his house.  Once at Wild Card, Manny and Freddie began the nearly three-hour gym session with nine rounds on the mitts, with each punch exploding like a July 4th firecracker.

“If this is how Manny hits with jet lag, I may need to get new gloves with thicker padding for our next sessions,” said Freddie.  “He was incredibly sharp for his first day.  He hit hard with good power.  After all these years, I’m still amazed at the great condition he’s in when he comes to training camp.  After traveling around the world yesterday, he put in a full day here – mitts, speed bag, shadow boxing – the works.  The best part was at the end when he lifted his shirt to show me his six pack and said, Freddie, I’m still here.”

Manny and undefeated WBC and IBF welterweight champion Errol “The Truth” Spence will meet in a blockbuster championship showdown that headlines a FOX Sports PBC Pay-Per-View on Saturday, August 21 from T-Mobile Arena in Las Vegas.

“Errol Spence is a very difficult fight for me; perhaps the most difficult of my career,” said Manny.  “But I have been an underdog my whole life.  I am used to that.  It is why I work so hard.  But the love and the prayers of my fellow Philippine citizens and Filipinos around the world sustain and inspire me.  I fight for the glory of our nation and for underdogs everywhere.”

Remaining tickets to the Pacquiao-Spence welterweight world championship event can be purchased through  www.t-mobilearena.com and www.axs.com.

Photos: Estrada, Chocolatito – Face-Off at Desert Diamond Arena
Dillian Whyte: I Won Clearly, So Why Would I Consider A Rematch With Jermaine Franklin?
Bill Haney calls Teofimo Lopez Sr, says their sons can fight next
“Honestly it’s one of the best things I ever did.” 😊 Amir Khan is loving life outside of the ring
The BN Preview: Questions will be both asked and answered when Williamson and Kelly collide in Newcastle