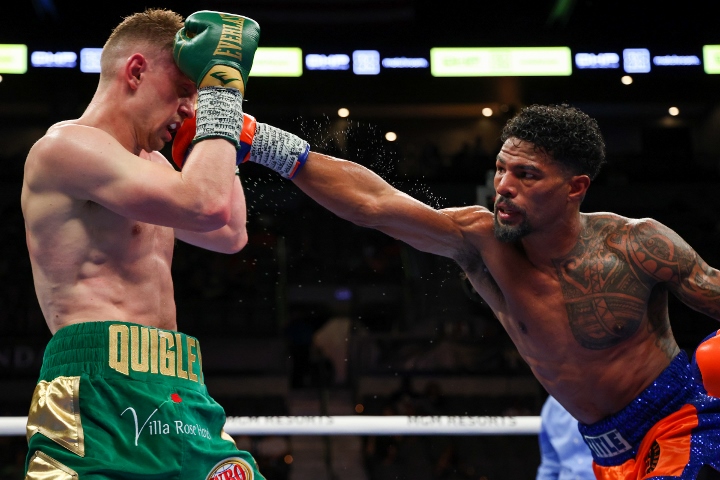 Shane Mosley Jr. (17-4) still can’t believe that he wasn’t awarded a victory when he fought Jason Quigley (19-1) on May 29th at the Mandalay Bay Events Center in Las Vegas. The bout was streamed by DAZN on the Devin Haney-Jorge Linares udercard.

Many ringside observers believed that Mosley had done enough to win the fight or that it should have been declared a draw.  The final scores were 95-95 and 97-93 and  96-94 in Quigley’s favor.

The 30-year-old Mosley has reviewed the fight and believes that he won by an even greater margin than what he felt in the ring right after the fight.

“So I have actually watched the fight.  Before I watched it I thought it was close to where either I got it or it was a draw. After watching it – to me – in my opinion, I feel that I definitely  won.  At worst 6-4 rounds and no way to be a draw. It was a close fight but I won most of the rounds. All the people I talked to said that it was close but I won the fight. The only two people who thought he won were the two judges who gave it to him,” Mosely told BoxingScene.com

“(Quigley’s trainer) Wayne McCullough after the fight while I was in the ring said, ‘congratulations’ and that I won the fight.  His team was telling me that and even Quigley after the fight said that he thought that it was a draw. Golden Boy had a cameraman getting footage and if they have that I would love to be able to get ahold of it and see it.”

After the fight Quigley said that he wants to move on to bigger and better things but Mosely believes that they have unfinished business and that a rematch should be in order.

“I think it is a fan friendly fight and I think people would want to see it again.  I want to push for that and I am going as far as that my manager and I are going to contest the decision with the Nevada State Athletic Commission,” said Mosley.

The 30-year-old believes that he proved he is the stronger and better fighter and that the proof can be found in the way that Quigley responded to some of Mosley’s punches.

“The other guys he fought, he walked them down and beat them up.  With me it wasn’t like that.  He didn’t fight that way at all.  From my perspective he needs to give me the opportunity because I feel like you are walking around with something I feel is mine, which is that NABO belt,” said Mosley.

Editor’s Letter: Yarde’s performance against Beterbiev demonstrated not only his quality but the importance of experience
Richardson Hitchins Believes He Should Be Headlining His Own Shows
Callum Walsh vs. Leonardo Di Stefano Ruiz on March 16 in Boston
Panel: How impressed were you by Anthony Yarde’s performance against Artur Beterbiev on Saturday?
10 takeaways from Artur Beterbiev’s thrilling eighth-round stoppage of Anthony Yarde