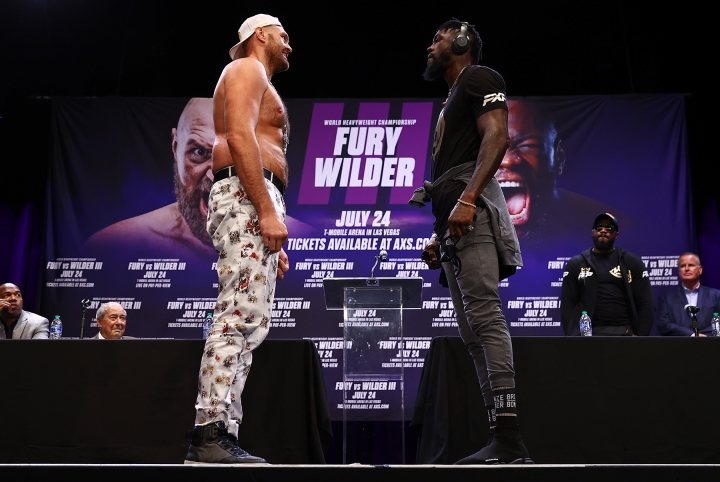 For the second straight time in their three-fight series, Tyson Fury and Deontay Wilder will fight in front of a four-person officiating panel all hailing from the United States.

Veteran referee Mike Ortega has been named by the Nevada State Athletic Commission as the third man in the ring for the third fight between England’s Fury (30-0-1, 21KOs) and Alabama’s Wilder (42-1-1, 41KOs). Connecticut’s Ortega was recommended by NSAC executive director Bob Bennett and unanimously approved by the five-chairperson panel during the commission’s monthly agenda hearing held Wednesday via remote conference call.

The commission also approved the selection of Tim Cheatham, Dave Moretti and Patricia Morse Jarman—all from Nevada—as the three judges for the lineal/WBC heavyweight championship. which takes place July 24 at T-Mobile Arena in Las Vegas, Nevada.

Ortega will earn $10,000 for his appointment as referee, while judges Cheatham, Moretti and Morse Jarman will earn $8,000 each for the assignment.

Fury will make the first defense of the WBC heavyweight title and lineal championship in the evening’s main event atop a Pay-Per-View telecast jointly presented by ESPN and Fox Sports.

Ortega has primarily worked on the East Coast over the course of his 25-year career as a ring official, though regularly working in Las Vegas since the pandemic. This appointment marks his first as a referee for a bout involving either Fury or Wilder.

In his most recently assigned title fight, Ortega oversaw the action in Mikaela Mayer’s ten-round, unanimous decision over Erica Farias to defend her WBO junior lightweight title on a June 19 ESPN show at Virgin Hotels Las Vegas. Most recently, Ortega was the referee for Janibek Alimkhanuly’s eighth-round stoppage of former secondary middleweight titlist Rob Brant this past June 26 also at Virgin Hotels.

Of the four assigned officials, judge Moretti is the only one to have worked either of the previous two fights between Fury and Wilder. Moretti was among the three judges assigned to Fury-Wilder II, having scored the bout 59-52 at the time of Fury’s seventh-round stoppage win last February 22 at MGM Grand Garden Arena in Las Vegas. His score was the same as that of Steve Weisfeld, while judge Glenn Feldman had the contest 58-53 by the time referee Kenny Bayless stopped the contest at 1:39 of round seven.

Moretti was also a judge for Wilder’s final successful defense of his WBC heavyweight title, a come-from-behind seventh round stoppage of Luis Ortiz on November 23, 2019. Moretti had Wilder losing 59-55 at the time of the stoppage, his scorecard again in line with that of Weisfeld and one round wider than that of judge Eric Cheek (58-56).

Aside from Fury-Wilder II, Moretti has worked just one other fight involving Fury. He was assigned to the June 2019 non-title fight between Fury and Germany’s Tom Schwarz, as was Morse Jarman. Their scorecards were not required, as Fury scored a second-round stoppage in the ESPN+ main event from MGM Grand.

Judge Cheatham has previously worked just one bout involving either fighter. He was among the three ringside officials for Fury’s twelve-round, unanimous decision victory over Otto Wallin in their September 2019 ESPN+ main event from T-Mobile Arena. Cheatham (118-110) saw the bout slightly more lopsided in favor of Wilder than was the Wilder-Fury I was far more debated in terms of its officiating on both sides of the ropes, with the bout ending in a twelve-round, split decision draw. Judge Alejandro Rochin (115-111) had Wilder winning their December 2018 Showtime Pay-Per-View main event at Staples Center in Los Angeles, while judge Robert Tapper (114-112) ruled in favor of Fury. England’s Phil Edwards (113-113) had the bout even to produce the split draw, with knockdowns scored by Wilder in rounds nine and twelve proving to be the difference on his card.

Referee Jack Reiss simultaneously garnered praise and criticism for his handling of the knockdown in the twelfth and final round. California’s Reiss reached the count of nine by the time Fury managed to rise from the canvas. The unbeaten Brit was then given boxing’s version of a sobriety test, with Reiss having Fury move left and right to convince the official of his ability to continue. The tactic goes far beyond the standard mandatory count and subsequent examination, though a practice regularly utilized in the state of California.

Nevada’s Russell Mora has been assigned as the referee for the sanctioned WBA heavyweight title eliminator. The three judges for the bout will be Glenn Feldman (Connecticut), John McKaie (New York) and Eric Cheek (Nevada). Mora will earn $1,500 for his role as referee, while each of the three judges will earn $1,200.

Neither have fought since their aforementioned first fight, which saw Helenius (30-3, 19KOs) upset then-unbeaten Kownacki in a fourth-round, technical knockout. Helenius trailed 30-27, 29-28 and 29-28 at the time of the stoppage, having floored the locally-based Kownacki (20-1, 15KOs) in round four before prompting referee David Fields to halt the contest moments later.

Also on the show—though not on the PPV portion—Alberto Puello will defend his WBA interim junior lightweight title versus former two-division titlist Rances Barthelemy. The referee will be Celestino Ruiz (Illinois), who will earn $1,900 for the assignment. The three judges for the scheduled twelve-round contest will be Lisa Giampa (Nevada), Don Trella (Connecticut) and Max Deluca (California), all of whom will be paid $1,600 each.