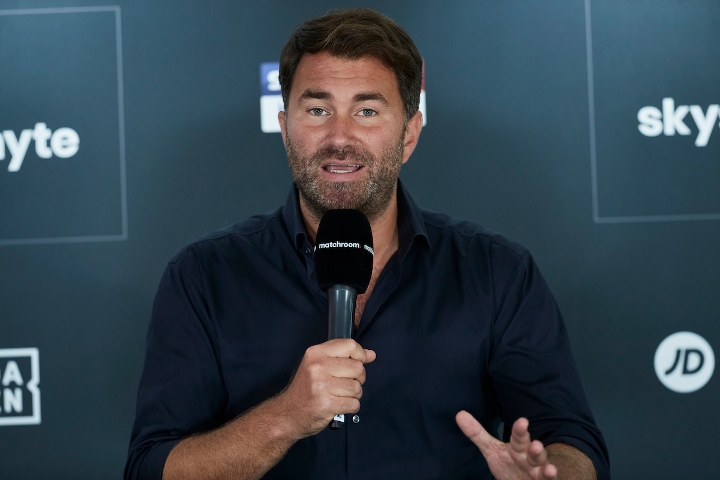 For a while, in 2019, it seemed as though Showtime Boxing was on the ropes. HBO, the longtime broadcasting leader in boxing, had just thrown in the towel, and for many observers, Showtime was one mishap away from having smelling salts foisted in its face.

Fast forward to 2021, and Showtime is still here, throwing punches. Case in point, earlier this spring, the network unveiled a robust 13-fight summer schedule that includes the upcoming 154-pound unification match between Jermell Charlo and Brian Castano on July 17. Other highlights up to this point have been the Nordine-Oubaali-Nonito Donaire bantamweight title fight on May 29 and the Gevonta Davis-Mario Barrios 140-pound pay-per-view matchup on June 26. The network was also responsible for staging the June 6 pay-per-view exhibition between Floyd Mayweather Jr. and YouTube star Logan Paul, whose brother, Jake Paul, will fight former MMA champion Tyrone Woodley in a sanctioned boxing match on Aug 1., on another Showtime-produced pay-per-view show.

One of the initial critics that predicted the network’s demise was British promoter Eddie Hearn, who claimed it would fold close up shop within a calendar year. In an interview with Boxing Social, the question was put to Hearn how he felt about Showtime’s recent busy spate of fights, in the context of the dire forecast he once made. Mea culpa, perhaps? Hardly.

Hearn offered an extended, if somewhat vague, answer, claiming that Showtime’s boxing viewership numbers were, in some instances, not even on par with that of DAZN, the over-the-top streaming service that entered the US market in 2018 and with which Hearn has an exclusive deal. (DAZN, a private company, has never released viewership numbers, while figures for Showtime, which is publicly traded under ViacomCBS, are routinely released through Nielsen – although they don’t include the network’s streaming figures; BoxingScene.com is owned by ViacomCBS).

“Yeah, I think Showtime is a great platform,” said Hearn. “The numbers are very similar to DAZN’s numbers. In fact, DAZN’s audience numbers are beating Showtime’s on many an occasion. Obviously I don’t know the [Chris] Colbert [against Tugstsogt Nyambayar] numbers from the weekend, but you can bet your life it starts with a two or three hundred thousand.”

Hearn also maintained that Showtime was not committed to boxing in the way that it used to be.

“I did expect Showtime to leave boxing,” said Hearn, “because I feel like the price-point for boxing got to bizarre levels. That’s why you saw HBO leave boxing. Showtime is certainly not invested in boxing, in my opinion, the same way they once were, but obviously they’re still an important network.”

Hearn then went on to offer something of a backhanded compliment to the president of Showtime Sports, Stephen Espinoza.

“Showtime’s a great platform,” Hearn said. “I still see Stephen retweet stuff [on Twitter] and then take it down, it’s all very bizarre. Showtime’s a great platform. Espinoza’s a great operator. He has a desire to win. He likes to be a competitive guy. But it’s changed a lot, though. You remember all of the PBC fights were on Showtime. Now a lot of those fights are on Fox. I haven’t thought too much about [Showtime’s] schedule. They have a great fight coming up, Charlo versus Castano. That’s a great fight on Showtime.”

Panel: How impressed were you by Anthony Yarde’s performance against Artur Beterbiev on Saturday?
BN Verdict: BN Verdict: Navarrete and Wilson combine to produce another early “Fight of the Year” contender
Nacho: Tank-Garcia is a Very Attractive Fight – It Should End By Knockout
Oscar De La Hoya Looks To Sign Terence Crawford With Golden Boy Promotions
Sulaiman threatens to block Beterbiev vs Bivol due to Russia sanctions