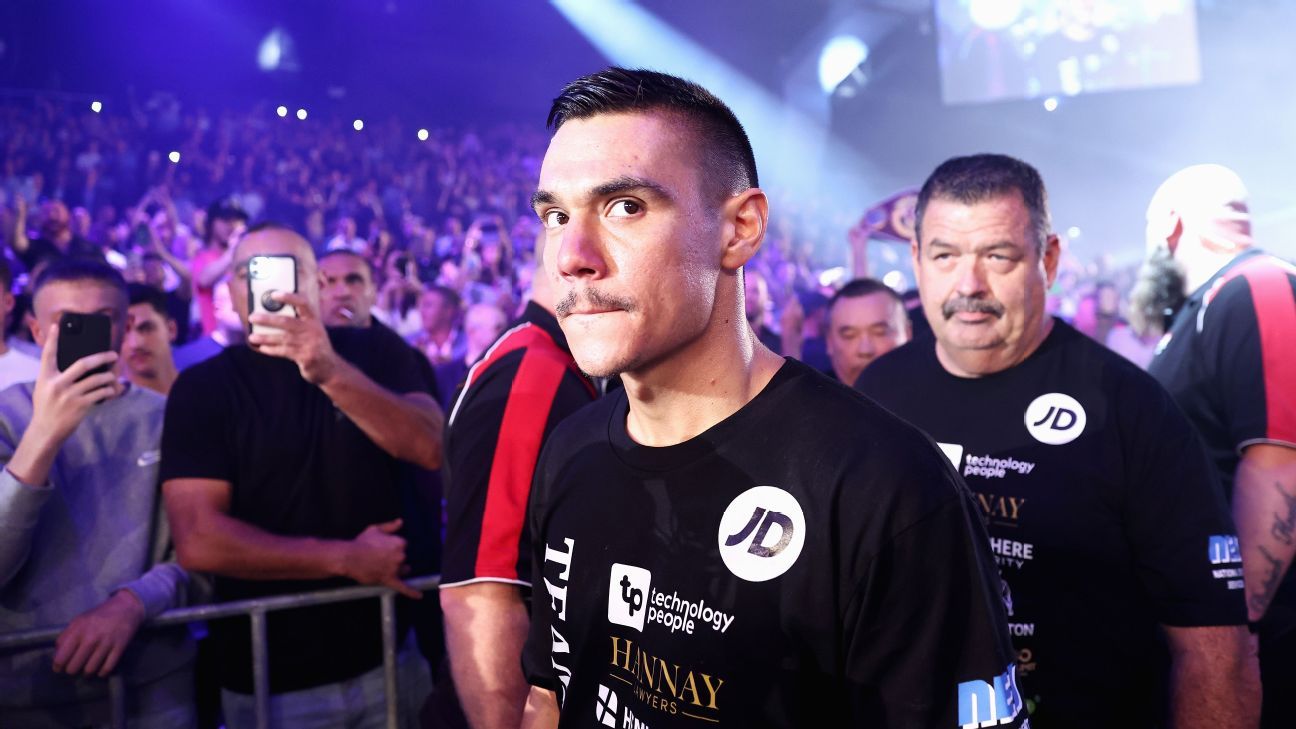 IT FELT pretty obvious even before Tim Tszyu and Steve Spark stepped into the ring in Newcastle on Wednesday evening. If Tszyu wants to be taken seriously, and have his name put up in lights, this had to be his last fight on Australian soil. At least for some time.

To nobody’s surprise, Tszyu, the son of boxing great Kostya, crushed Spark, a man who received the eleventh-hour call up after Tszyu’s original opponent Michael Zerafa withdrew from the bout, citing COVID-19 travel issues as the reason he would not fight. At no moment did Tszyu appear uncomfortable against Spark, bossing his younger opponent from the opening bell right up until referee Brad Vocale declared him winner by TKO midway through the third round.

The expected victory saw Tszyu improve his professional record to 19-0 (15 KOs), but it would barely have raised an eyebrow outside of Australia. It’s a shame considering you could genuinely argue Tszyu is the greatest boxer this country has produced over the past decade.

Last year, Tszyu humiliated former world champion and Manny Pacquiao conqueror Jeff Horn in a one-sided bout which all but ended the Queenslander’s career. He then floored Kiwi Bowyn Morgan inside two minutes, before crushing two-time world title challenger Dennis Hogan. In all three fights, and again vs. Spark, Tszyu appeared several classes above and as if he barely had to shift out of second gear.

Technically, Tszyu is flawless. His ability to combine patient and precise striking with power would unsettle any opponent. He lands body shots as well as any fighter, while his stamina and poise allows him to go toe-to-toe for up to 12 rounds. His perceived weakness of failing to finish his rivals is also vastly overstated, given he hasn’t needed the judges’ scorecards in each of his past six fights.

But a major contributor to the lack of global interest in Tszyu stems from his persistence to fight Down Under and not take his talents abroad, despite confirming to ESPN early in 2020 that a shift to the United States was firmly on his mind as he hunts a world title.

“My goal has always been to go to the States and fight over there,” said Tszyu, before his blockbuster battle against Horn. “I know I’m good enough to make a splash and fight the best for a world title. That’s my dream and I’m going to make it happen.”

Only once in Tszyu’s 19 fight career has he fought outside Australia — back in 2017 when he took on Ivana Siau in Auckland, New Zealand — while 12 have been in his home state of New South Wales.

Tszyu’s camp reportedly offered light middleweight champion Brian Castano AU$10 million to fight their man on Australian soil later this year. Unsurprisingly, it was rejected, and the Tszyu-Zerafa bout was born, which ultimately became Tszyu-Spark, an uninspiring fight which never seemed worth the AU$60 pay-per-view cost.

Sure, the pandemic hasn’t helped Tszyu’s cause of taking his talents overseas, but compatriot George Kambosos managed to make it work. Kambosos earned a split decision over Lee Selby in London late last year and will face Teofimo Lopez in Miami next month. The 28-year-old hasn’t fought in Australia since 2017 and is thriving on the international stage.

The time is now for Tszyu to take his talents overseas and showcase his skills to a wider audience. If he continues to stay fighting lesser names in Australia, it will only damage his reputation.

As an undefeated junior middleweight, Tszyu is currently one of several men — including American Erickson Lubin and Russian Bakhram Murtazaliev — in position to take on the winner of Jermell Charlo and Castano’s title unification fight later this month. If he does get the nod, he will be heading abroad for a world title shot, as there’s next to no chance such a fight would be staged in Australia.

But Tszyu believes “there’s a bit of politics in boxing” and isn’t convinced his team will be receiving the call up. Instead, Tszyu named 32-year-old Englishman Liam Smith (29-3-1, 16 KOs), who caused pound-for-pound star Canelo Alvarez problems when they met in 2016, as the man he wants to face next.

“I’ve got a few names in mind but Smith is who we’ve been talking about,” Tszyu told Main Event after the fight. “I think a name like Smith, a fighter on the global stage, on my resume is what I need.”

Whether it’s Smith or Russian Magomed Kurbanov, who Tszyu also declared a realistic fight possibility, his next bout must be overseas. Defeating a fighter of the calibre of either Smith or Kurbanov outside Australia is sure to attract the interest of boxing fans, as well as Charlo and Castano.

Tyson Fury Stops Derek Chisora In Tenth, Lashes Out At Oleksandr Usyk To His Face Afterward
Steven Nelson Vows To “Smash” Ballard on Crawford-Avanesyan Card
Spencer vs Salgado FULL FIGHT: September 4, 2022 | PBC on FOX
The Golden Era of The Hardcore Four
Regis Prograis On Teofimo Lopez: “I Really Do Feel Like I Can Hurt Him…Like He’s Going To The Hospital”