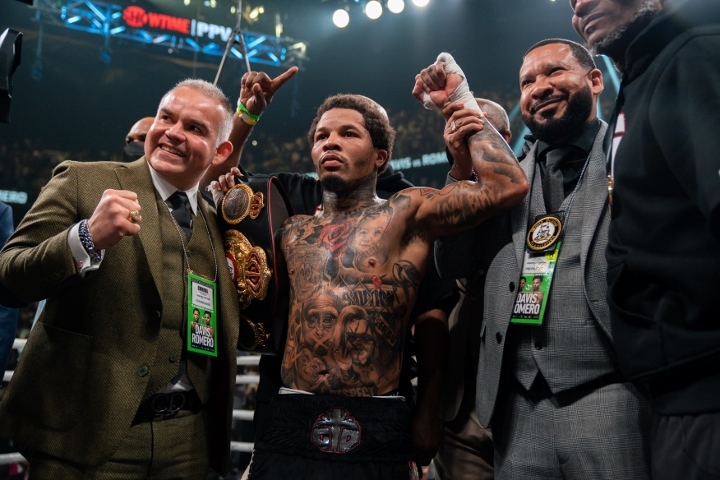 Garcia sat ringside Saturday night to witness Davis’ sixth-round knockout of Rolando Romero at Barclays Center in Brooklyn. The unbeaten Garcia even made a $20,000 bet with Errol Spence Jr., who was seated near him, that the hard-hitting Romero would defeat Davis in their Showtime Pay-Per-View main event.

Though Garcia was adamant both before and after Davis’ victory about his willingness to battle Davis in what would be a high-profile fight, Ellerbe, the CEO of Mayweather Promotions, was dismissive of that possibility during Davis’ post-fight press conference.

“Ryan don’t wanna fight Tank, man,” Ellerbe said. “Come on, man. You know, you got guys out there, like [Chris] Mannix and them, trying to pump him up like he’s some killer. You know, Ryan Garcia, like I said, he’s a good fighter. Got nothing but respect for him, but he don’t want none of that smoke. He don’t want none of that smoke because, if he did, he’d make Golden Boy do it.

“And I’ve tried on two occasions that some of the reporters seem to forget when they say that, ‘Oh, Tank Davis don’t wanna fight none of the top fighters.’ But then they say that Ryan Garcia is a top fighter. But hey, we know what it is, Mannix.”

Ellerbe referred in part to an attempt early in 2021, following Garcia’s seventh-round knockout of Luke Campbell, to put together a Davis-Garcia fight. Though there was progress made in those negotiations with Garcia’s handlers, Garcia grew more interested in the showdown with Manny Pacquiao that didn’t materialize.

Garcia (22-0, 18 KOs), of Victorville, California, is scheduled to return to the ring July 16, perhaps against Dominican southpaw Javier Fortuna. Assuming Garcia defeats Fortuna (37-3-1, 26 KOs, 2 NC) or another opponent that night, he seemingly would be free to face Davis toward the end of this year.

Their partnerships with competing promoters and networks/streaming services will complicate matters if the 27-year-old Davis (Mayweather; Showtime) and the 23-year-old Garcia (Golden Boy; DAZN) determine they want to fight each other. A joint pay-per-view venture is a potential solution now that DAZN has entered the pay-per-view business, but Davis is more proven as a pay-per-view fighter and a gate attraction.

Those are moot points, according to Ellerbe, no matter how successful from a financial standpoint that he and others are sure a Davis-Garcia event would become.

“Again, Golden Boy is not gonna put him nowhere near [Davis],” Ellerbe said. “I mean, the closest he’s gonna get to Gervonta Davis is where he was tonight. You know? And Ryan, like I said, I like him as a person. You know, we have a mutual respect. But, you know, he don’t want to fight Tank. It’s just all talk, all talk.”

Jonas, Berghult to fight in Sept. unification bout
Broner vs Figueroa didn’t happen in 2018, it’s happening now!
Vergil Ortiz: Good Feeling To Fight Again At Home, Will Be Even Louder This Time
Santa Cruz vs Wood purse bid scheduled for Aug. 12
Jake Paul: I Was Ready To Go To 205 To Fight Rahman; These Guys Are Con Artists