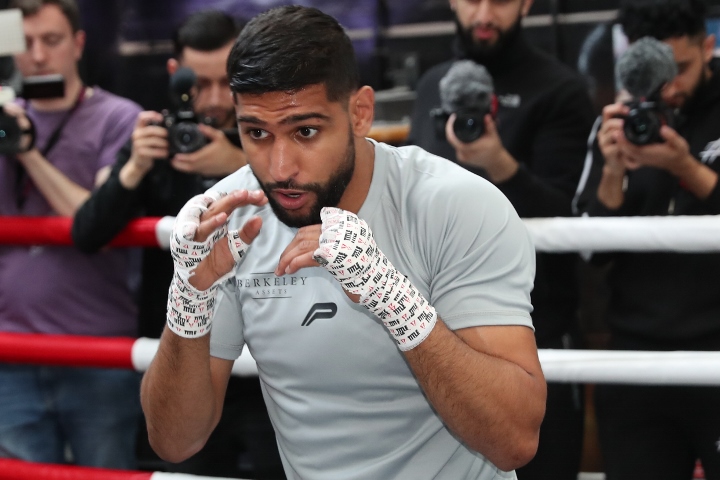 Amir Khan appears to still have an itch for fighting the great white whale of his boxing career.

The former British titleholder announced his retirement from the sport earlier this month, capping a nearly two-decade career in the professional ranks. Khan, a native of Bolton, England, was coming off a sixth-round stoppage loss at the hands of countryman and sworn rival Kell Brook in February at the Manchester Arena in Manchester.

There was some speculation that Khan would re-enter the ring at some point later in the year, with names like Conor Benn being thrown around as potential opponents. In the end, Khan chose to walk away from the sport.

Or so it seemed.

In something of an about-face, Khan recently called out the great white whale of his boxing career, Floyd Mayweather Jr., to a fight after Mayweather went a few rounds with his former sparring partner, Don Moore, in an exhibition match staged in Dubai earlier this month. Mayweather played with Moore over their eight-round bout, which saw the Hall of Famer drop his outmatched opponent with a body shot in the final round.

Khan was apparently a keen observer, and seemed to suggest an exhibition with Mayweather would be an intriguing idea.

“We saw the event today, I think Floyd needs a real challenge,” said in an interview with azizdxb. “We should do it, 100 percent, guys. Either hit me up or hit my brother up. I’m calling him out! Let’s make it happen.”

Khan (34-6, 21 KOs) was heavily rumored to be in the running to face Mayweather in a welterweight title bout nearly a decade ago, but that fight failed to materialize, much to Khan’s disappointment.

Khan’s pronouncements are also contrary to sentiment he expressed recently regarding Mayweather. The two figures apparently ran into each other last week in Dubai, according to Khan, who said Mayweather urged that he withhold his retirement announcement and suggested that they fight each other inside the ring.

“Floyd said to me, ‘Look, we should get it on,’ Khan recalled in an interview with talkSPORT. “And I said, ‘Brother, tomorrow I’m going to announce my retirement.’ And he goes ‘No, I don’t think you should.’”

Mayweather (50-0, 27 KOs) effectively retired from pro boxing in 2017 after his beatdown of UFC star Conor McGregor in their lucrative mismatch. Since then the Las Vegas native has been somewhat busy on the exhibition circuit. Last summer he faced YouTube star Logan Paul in an eight rounder at the Hard Rock Stadium in Miami Gardens, Florida on Showtime Pay-Per-View.