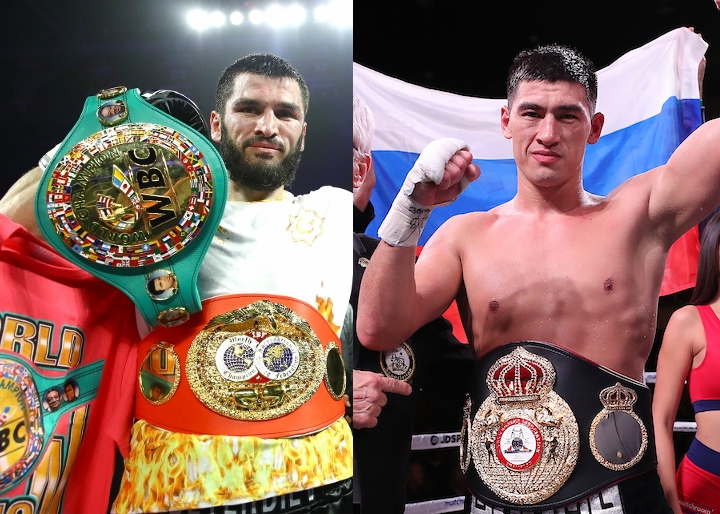 Eddie Hearn has no doubt that Dmitry Bivol is now the man to beat in the light heavyweight division.

The Russian 175-pound WBA titleholder picked up a career best win last month with a unanimous decision over Mexican superstar Canelo Alvarez in their 12-round light heavyweight title bout at the T-Mobile Arena in Las Vegas.

Given Bivol’s accomplishment, Hearn, the head of Matchroom Boxing, went so far as to say recently that his Russian charge should now be regarded as the “big favorite” over countryman and unified champion (WBC, IBF) Artur Beterbiev.

Beterbiev is scheduled to defend his two 175-pound titles against WBO titlist Joe Smith Jr. in a light heavyweight unification bout on June 18 at Madison Square Garden in New York City. The winner of that fight will own three of the four 175-pound titles; Beterbiev figures to be the favorite. Should he come out victorious in that fight, a match-up with Bivol for the undisputed distinction in the division would be the next natural step.

“After that performance, I would say Bivol is a big favorite against Beterbiev, to be honest with you,” Hearn said on The DAZN Boxing Show. “It’s a great fight. We’ll see how [Beterbiev] gets on with Joe Smith, but that performance from Bivol (against Alverez) was incredible.”

Bivol, regarded in some circles as “shot” judging from his previous two bouts against Craig Richard and Umar Salamov, looked in prime form against Alvarez, using his distance and movement to befuddle the Mexican round after round. All three judges scored it 115-113 in favor of Bivol, although the margin on those scores were admittedly too close for comfort given how superior Bivol looked to Alvarez at times.

For a fight between Bivol (20-0, 11 KOs) and Beterbiev (17-0, 17 KOs) to materialize, it will likely require Hearn to collaborate with rival outfit Top Rank Inc., which promotes Beterbiev, and reach some kind of deal that would be beneficial for both sides.

Although Hearn promotes Bivol, he did not shy away from the buildup of the fight that he favored Alvarez, the sport’s cash cow. Hearn, however, remains proud of Bivol’s victory.

“I got him the opportunity that I had always promised I would give him,” Hearn said.

“As much as I was disappointed for Saul, I was delighted for Dmitry because he’s a fine young man and he deserved his shot at greatness.”

Invasion Of The Body Snatcher: Mike McKinson Can’t Withstand Vergil Ortiz’ Body Attack
Broner vs Figueroa didn’t happen in 2018, it’s happening now!
Ex-featherweight champion Famechon dies at 77
Rahman Comes In Overweight In Attempt To Show He Could’ve Made 205 For Jake Paul Fight
Esparza: I Think A Rematch With Seniesa Estrada Will Be Bigger Than Taylor-Serrano