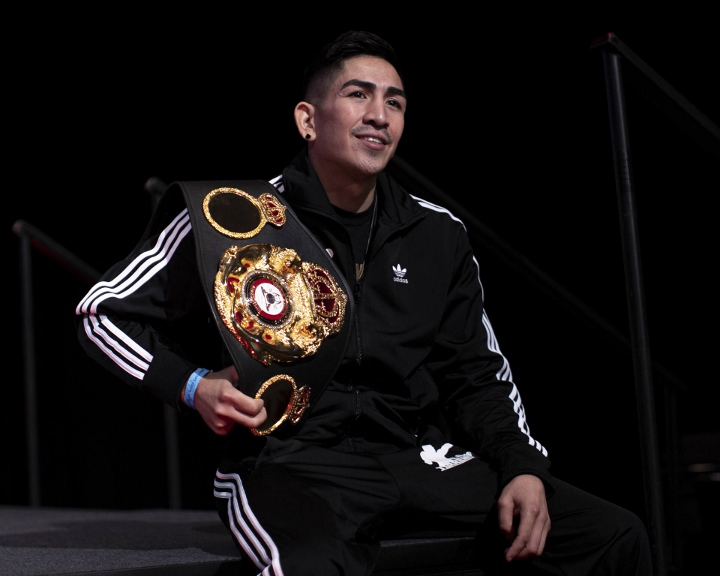 The title consolidation fight between Leo Santa Cruz and Leigh Wood will head to a purse bid at some point.

When that day arrives is up to the World Boxing Association (WBA), who has spent the past several weeks reviewing an appeal from Wood’s team regarding the final purse split for their forthcoming featherweight title fight. The matter was expected to be resolved sometime in the second and third week of May, though that deadline has obviously passed as the matter now creeps into the first week of June.

BoxingScene.com has confirmed with both camps that the fight remains in play, pending the final decision from the WBA before a purse bid is called. BoxingScene.com has learned that Wood—through Matchroom Boxing—has appealed for a 50-50 purse in lieu of the traditional split between a “Super” champion and any other challenger or secondary titleholder.

Santa Cruz—who is represented by TGB Promotions—has held the WBA “Super” featherweight title since January 2017, when he regained the belt in a twelve-round points win over Belfast’s Carl Frampton who dealt the first loss to the Mexican star six months prior. Wood claimed the WBA “World” version of the belt last July in a 12th round knockout of China’s Xu Can last July in Brentwood, England.

The five-plus year reign for Santa Cruz—his second at featherweight—is deceptive as he has not fought at the weight since a February 2019 decision win over Rafael Rivera.

Just three bouts have followed for Santa Cruz (38-2-1, 19KOs), all at junior lightweight including a ten-round shutout of Keenan Carbajal this past February 5 in Las Vegas. Only one bout has served as a main event during that time, his sixth-round knockout loss to Gervonta Davis in an October 2020 bout fought at the junior lightweight limit but with the WBA “Super” 130-pound and secondary WBA lightweight belt both at stake.

Wood (26-2, 12KOs) has since emerged as a rising star during his brief title reign. The upset win over Xu Can provided instant notoriety for the streaking Brit, whose stock soared sky high in his most recent performance. Wood rallied from an opening round knockdown and a scorecard deficit to twice drop and emphatically knock out Belfast’s Michael Conlan in their epic March 12 slugfest in front of a sellout crowd in his hometown of Nottingham, England.

The fight propelled Wood to instant stardom, taking a well-deserved victory lap before setting his sights on Santa Cruz and upgrading his current title status. The title consolidation bout was formally ordered April 6 and with the two sides given 30 days to negotiate terms.

The expectation was that Santa Cruz would walk away from the fight and vacate his title. The future Hall of Famer kept his previous promise with the WBA that his next fight would be at featherweight and versus the sanctioning body’s mandated challenger.

Had Santa Cruz opted to remain at junior lightweight, the belt would have been declared vacant which would have freed up Wood to pursue other options. BoxingScene.com has learned that one such opportunity was an explored rematch with Conlan, which would have taken place August 6 in Conlan’s Belfast hometown.

Wood’s name was also attached to rumors of a title unification bout with two-time and recrowned IBF featherweight titlist Josh Warrington (31-1-1, 8KOs). Such a bout would have to come later in the year, as Warrington continues to recover from a fractured jaw sustained in his title regaining, seventh-round stoppage of Kiko Martinez on March 26 in his Leeds hometown.

Instead, everyone is forced to play the waiting game as the WBA seeks to find the best solution to move forward with the fight that is part of its title reduction campaign.

Inspired by her Lioness sister, Natasha Jonas aims to hand Patricia Berghult her first loss
Usyk vs Joshua 2 official for DAZN in the U.S. and other markets
Omar Figueroa drops Robert Guerrero 5x in 3RDs for the TKO
The Beltline: Benn and Eubank Jnr return to the shadows for bragging rights, comfort and cash
Xander Zayas Blasts Out Elias Espadas In Explosive Fashion