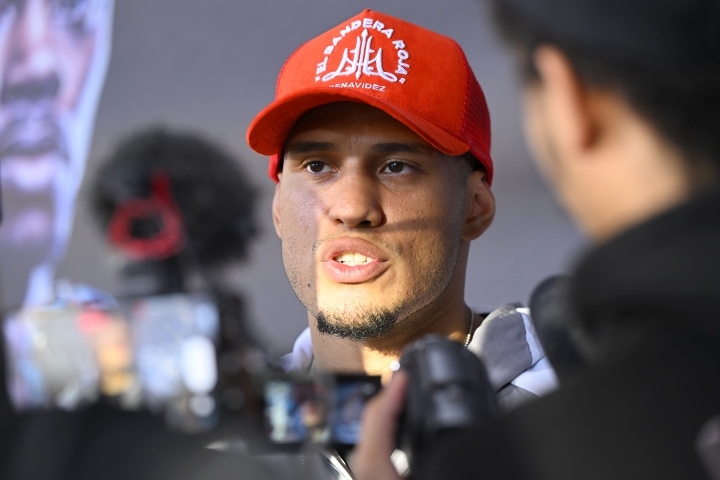 GLENDALE, Arizona – David Benavidez feels like he’s been down this road before with Jermall Charlo.

The former two-time WBC super middleweight titlist—who now holds an interim version of the belt—has been made well aware of Charlo’s claim that he is now willing to enter such a matchup. It’s been discussed several times before, previously ending with a litany of excuses as to why it can’t happen though with recent talks suggesting the Houston native is up for such a clash—next year.

It’s just talk for now to Benavidez (26-0, 23KOs), who is eager to secure the biggest fight possible. Anything less than ink to paper is a waste of time.

“I don’t think anything about that until I get the contract,” Benavidez told BoxingScene.com on Charlo’s recent comments regarding such a fight. “A lot of these guys say stuff, it’s like they’re forced to say it when the cameras are around. How many times has he said that? A lot of times. Nothing’s happened yet.

“Until it finally happens, everything coming out of his mouth is just bullsh!t.”

Benavidez remains intent on facing the best fighters in and around the super middleweight division. The unbeaten 25-year-old kept the line moving following a third-round knockout of former IBF middleweight titlist David Lemieux on May 21 at Gila River Arena in Glendale, Arizona, barely 30 minutes form his Phoenix childhood hometown.

The Showtime-televised bout comes four weeks ahead of Charlo (32-0, 22KOs) enjoying a local headliner of his own. Charlo defends his WBC middleweight title versus Poland’s Maciej Sulecki atop a June 18 show from Toyota Center in his Houston hometown. Wedged in between, secondary WBA super middleweight titlist David Morrell (6-0, 5KOs)—who suddenly can’t keep Benavidez’s name out of his mouth—fights in his Minneapolis hometown.

Benavidez has maintained a hit list comprised of Charlo, Morrell and longtime divisional rival Caleb Plant (21-1, 12KOs). The sense is that there stands a better chance of landing Morrell or Plant—the latter waiting a fight date for a summertime clash with Anthony Dirrell, whom Benavidez stopped in nine rounds in September 2019 for his second title reign.

A fight with Charlo gained greater public demand after the two exchanged harsh words and a couple of shoves among team members when both were ringside for the Errol Spence-Yordenis Ugas Showtime Pay-Per-View event this past April in Arlington, Texas. Benavidez remains unconvinced that it will lead to a head-on collision anytime soon, or that Charlo isn’t just holding out for the sport’s biggest prize.

“I don’t know what he wants. It’s like he just wants that Canelo [Alvarez] fight,” insists Benavidez. “He wants that big payday. But you have to take a big risk to get that big reward, fighting the face of boxing. I feel like the biggest fight for him besides Canelo is me. And vice versa. All of our stock goes up.

“These people don’t understand. They don’t want to give nobody credit. They just want to be like, ‘I’m the face of the show’ but that’s not how boxing works. In order to get to the next level, I need Charlo, I need Caleb Plant, I need Canelo. That’s just the reality of that.”