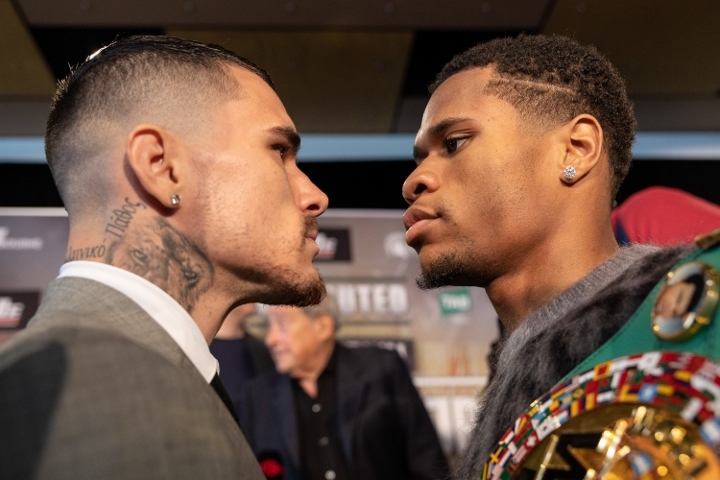 Jeff Horn upset the legendary Manny Pacquiao the last time Bob Arum brought a favored fighter to Australia for a promotion fit for a stadium.

Horn’s win caused controversy because Pacquiao nearly knocked him out during the ninth round and appeared to do enough to out-point a then-unbeaten Horn in his hometown of Brisbane. Horn roughed up the Philippines’ Pacquiao during that 12-round fight for Pacquiao’s WBO welterweight title in July 2017 at Suncorp Stadium and won a unanimous decision.

“It was a very competitive fight with Pacquiao and Horn, and Horn eked out a victory,” Arum told BoxingScene.com. “I thought Horn’s victory was justified. The announcers from ESPN had Pacquiao winning the fight, but I thought Horn won. It was very close, but he won.”

Another of Arum’s fighters, newly signed Devin Haney, will face another Australian champion, George Kambosos Jr., in a lightweight title unification fight Sunday afternoon at Marvel Stadium in Melbourne. Kambosos (20-0, 10 KOs) is from Sydney, but he is of Greek descent and Melbourne has a large Greek population, which should help create quite a home-ring advantage for the IBF/WBA/WBC franchise/WBO 135-pound champion.

Haney (27-0, 15 KOs), who owns the WBC world lightweight title, was raised in Oakland and resides in Henderson, Nevada, just outside of Las Vegas.

The 90-year-old Arum – whose company, Top Rank Inc., signed Haney to a multi-fight agreement late in March – is certain his fighter can beat Kambosos on the scorecards in Australia. When asked about his level of concern if their high-profile fight goes the distance, Arum replied, “Absolutely none at all.”

The judging panel for Kambosos-Haney does not include an Australian or an American.

The Australian Boxing Commission has assigned Hungary’s Zoltan Enyedi, Poland’s Pawel Kardyni and Canada’s Benoit Roussel to judge Kambosos-Haney. During the approval process, Haney’s handlers had two unnamed judges, neither from Australia, removed from the initial panel that was chosen to judge their fight.

“Judges can make mistakes,” Arum said. “You know, that’s always possible. They’re human. But I think it’s a level playing field as far as the officials are concerned.”

Panama’s Hector Afu will serve as the referee for a fight that ESPN will televise live Saturday night in the United States. The Kambosos-Haney bout is expected to begin at approximately 11:15 p.m. ET in the U.S.

Unless their fight results in a draw or a no-contest, Kambosos or Haney will become the eighth fully unified champion in any division during boxing’s four-belt era. Haney is a slight favorite, according to most sportsbooks.

“I just think Devin has enough boxing ability to get him through,” Arum said, “and I like his chances in the fight.”