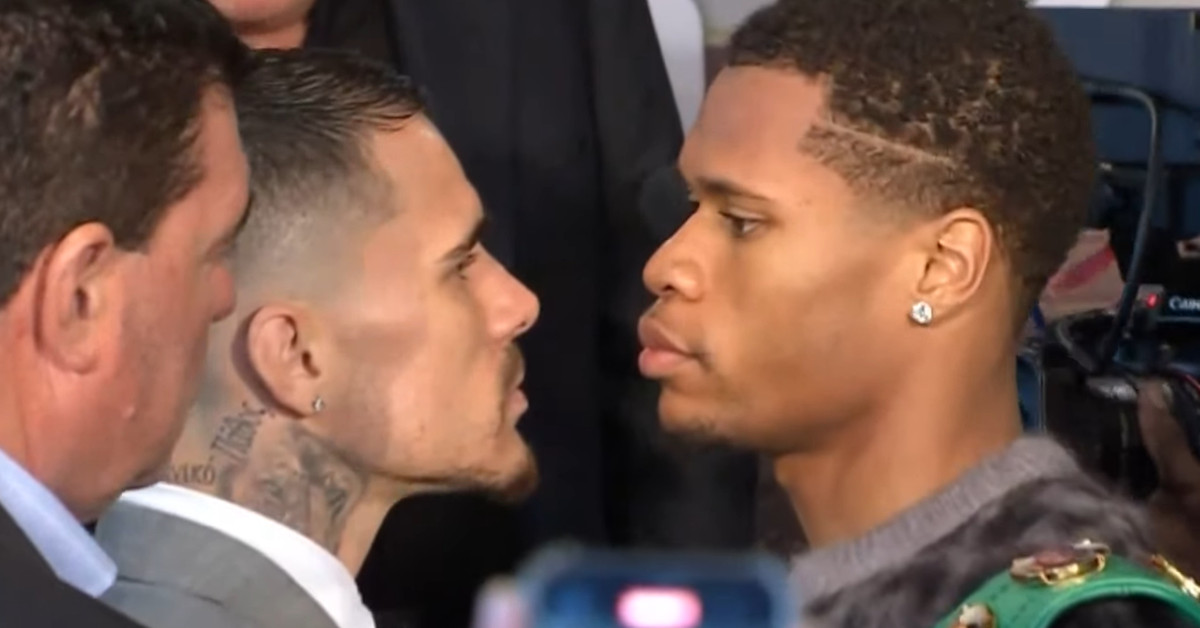 George Kambosos Jr and Devin Haney didn’t get into any big trash talk at today’s final press conference in Melbourne, Australia, with Kambosos not going back to the “rat” well, and everyone involved sounding happy to be involved in such a big event for Australian and global boxing.

Without any choice antagonistic quotes, we were left with Kambosos (20-0, 10 KO) and Haney (27-0, 15 KO) both displaying cool confidence ahead of their fight, before an intense staredown for the media assembled, and there was quite a bit of it for this undisputed lightweight championship clash.

Along with Kambosos and Haney, the main undercard fighters spoke, as well, and we’ve also got those quotes for you.

Bad Left Hook will have full live coverage, including round-by-round for the Kambosos vs Haney main card starting at 9 pm ET on Saturday, June 4 (U.S. time).

“It has been a long, hard journey. I’m ready. All the moments have got me ready again, and I will shock the world again. Underdog? Beautiful. We’re ready.”

“I’ve been through it all. Whatever comes, we are ready and fully prepared. I am a warrior. We’re prepared.”

“I’m just having fun, enjoying the moment, talking the truth. If it’s (affected Haney), it has, if it hasn’t, so be it. The fight is what matters.”

“Victory by any means. I have manifested everything, every part of this journey. They said I’d never be here. Only two people believed it, me and my father. I’ve manifested my victory.”

“I love the underdog status. It’s OK. They’ve bet against me my whole career. I’m still the top dog. And I will remain the top dog.”

“It’s very motivating (to be on this stage), to have my country behind me. I haven’t had that for a long time. I’m embraced by all of it. I’m just going to the next level like I always have, but ultimately it’s me and him in that ring.”

Listen to our Kambosos vs Haney preview and more on this week’s podcast!

“This is the biggest stage but something I dreamed of. I didn’t think it would come this early, but I’m thankful and it’s time.”

“I knew coming in he was going to try anything he can to throw me off my game and get me unfocused. He can say what he wants to say. I will come out victorious by any means.”

“It will be very satisfying (to win). I did it against all odds. I wouldn’t say stacked against me, but it wasn’t working in my favor. They did everything they can to put me at a disadvantage. It’s going to make it that much sweeter. I look forward to bringing the belts back and showing my dad what we accomplished.”

“I feel like I’m the far better fighter. I have far more skills than him and I will show it. It’s for me to show in the ring. The betting odds really don’t matter. I will show you. Anybody can say anything, but I’m levels above him.”

“This will be huge. This will be everything. We might have a parade back in the States after.”

On his style approach: “We’re fighting with 8 oz gloves, one punch can change any fight. You never know. I’m prepared for anything. We’re able to make adjustments, but I have a game plan we’re going to stick to and I feel like it’s going to work. We’ve studied George, we know the mistakes he makes, the things he does good, the things he doesn’t like.”

“This is a massive opportunity for me. A win over Palicte will give me another opportunity to fight for a world title. I’m so excited and so grateful to be part of this show. Being a part of this event has been tremendous and given me more hunger and more determination to one day headline shows myself at Marvel Stadium. To do that and achieve my dreams, this is a must-win fight for me. I’ve worked extremely hard and I’m ready to get the job done.”

“I’ll be keeping a close eye on (Inoue vs Donaire 2). I’m ranked well with all the sanctioning bodies. I want to be Australia’s next world champion, so whether that’s the winner of Inoue-Donaire or the new WBO champion Paul Butler, I believe I’m ready for any of them.”

“I’m so happy and excited to be part of Kambosos vs Haney. Kambosos was my running mate when Manny Pacquiao was fighting in Las Vegas. And thank you to Team Moloney for choosing me. I’ve trained hard for this fight. Moloney’s a good fighter and I’m a good fighter, too. This is a good fight.”

“It’s such a huge stage. We’ve got belts all over the place. It’s really, really cool. I’m pretty sure our fight is for a belt, too, and I noticed Lucas didn’t bring our belt. I hope he didn’t forget it, because I made room for it in my baggage on the way back home.”

“I’ve been told it’s for two belts. The one I have, the one I have which (a WBO trinket) and (an IBF trinket). I didn’t bring it because I didn’t realize I was supposed to. … I’m 43 years old. I’ve got, say, three or four more fights to go. I want to solidify my career and take good fights, not one where I’m there to roll someone over. Junior Fa and Joseph Parker have been on the radar for many years. It’s a good rivalry between Australia and New Zealand. It made sense I fight Junior Fa now. It’s good for us.”

“I’m coming to show my skills, show what I can do. I took this fight on short notice but I’m ready to give it all. He’s a good fighter, but in the heavyweight division, one punch can change the fight.”