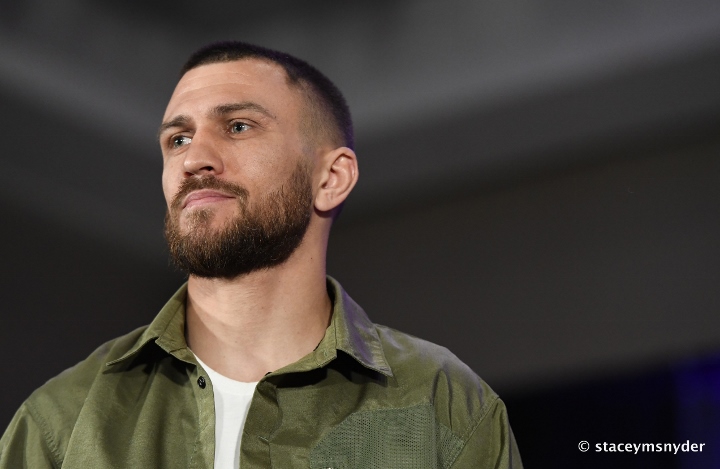 Promoter Bob Arum thinks that Vasiliy Lomachenko will return to the boxing ring if the stakes are high enough.

The ballyhooed, three-division titlist from Ukraine recently put his boxing career on hold in order to help defend his country from the ongoing Russian invasion. Lomachenko pulled out of a proposed fight with three-belt lightweight champion George Kambosos to join his country’s military.

In his stead, the Las Vegas-based, WBC lightweight titlist Devin Haney will take on Kambosos in a full unification bout this Saturday, June 4, at Marvel Stadium in Melbourne, Australia.

Haney signed a multi-bout contract with Arum’s Top Rank Inc. and is obligated to give an immediate rematch to Kambosos in the event that Haney defeats him on June 4. If Haney defeats Kambosos again, on Australian soil, he may be in line to face Lomachenko next year.

In a recent interview, Arum expressed a keen interest in having Lomachenko face either fighter and believes, moreover, that the prospect of becoming an undisputed champion may be too difficult for Lomachenko to turn down. Arum made it clear that Lomachenko is the frontrunner to face the winner of Kambosos-Haney.

“Absolutely, it’s Lomachenko, who for me is the gold standard for lightweights,” Arum said in an interview with FightHubTV. “Unfortunately he’s in Ukraine, fighting for his country. We couldn’t get him out. Hopefully we can arrange that. I would like to have Lomachenko fight one of these guys for the world title.”

Arum offered an update on his Ukrainian charge.

“The town he lives in is 10 kilometers north of Odessa,” Arum said. “There hasn’t been much shelling or everything that far north, but, again, Lomachenko is in uniform and he’s doing his part in defending his country from Russian aggression.”

Arum noted that Egis Klimas, Lomachenko’s longtime manager, has been in constant communication with his charge and that Lomachenko expressed to Klimas a desire to fight for the undisputed lightweight championship.

“I haven’t talked to him directly because English is not his first language obviously,” Arum said. “Egis Klimas talks to him twice a week and I get my information from Egis.

“Egis believes that Lomachenko is ready to come out if there was an opportunity to fight for the lightweight title.”

Should Lomachenko leave behind his military duties to pursue a world title, he would be following in the steps of his close friend and countryman Oleksandr Usyk, the unified heavyweight champion. Usyk joined his country’s military this past spring but eventually decided to defend his heavyweight titles against Anthony Joshua in a rematch of their first meeting in September at the Tottenham Hotspur Stadium in London, which Uysk won on points. Their fight is reportedly slated to land in Saudi Arabia on July 23.