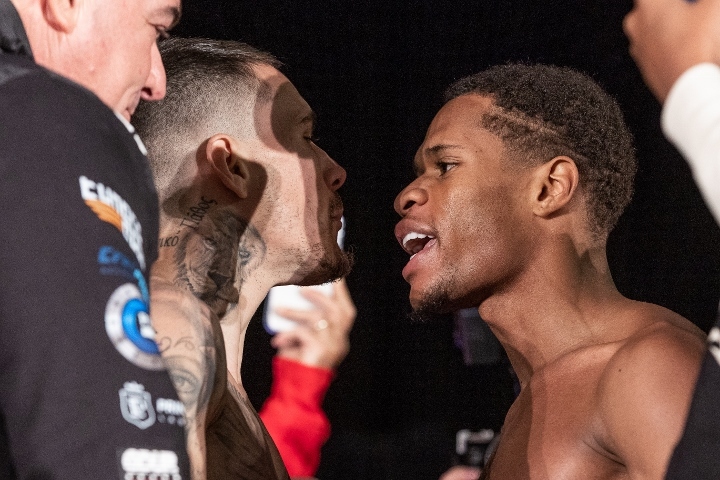 WBC lightweight champion Devin Haney was shaking his head when George Kambosos failed to make the division limit on his first attempt.

Kambosos, who holds the WBO, IBF, WBA lightweight straps, was overweight by 0.36. He was given two hours to make the lightweight limit and made the weight on his second try, by stepping on the scale at 134.49-pounds.

The fight takes place on June 5 at Marvel Stadium in Melbourne, Australia (June 4 in the United States).

According to Haney, the Australian boxer is not a “true champion” for initially failing to make the weight. He believes the 20-0 fighter had struggled to cut weight in camp.

For Kambosos, the contest is his first defense after securing one of the biggest shockers of 2021 – when he dropped and decisioned Teofimo Lopez over twelve rounds to capture the unified crown at New York’s Madison Square Garden.

The Kambosos-Haney winner will be crowned as one of the few undisputed world champions in the sport.

Kambosos has proven to be a master at the art of playing mind games with his opponents – and he even claims that his mishap at making weight may have been a ploy to toy around with Haney’s mental preparation for the fight.

Panel: What is your favourite heavyweight fight involving a British boxer and why?
Bivol-Ramirez: WBA Assigns August 21 Purse Bid In Orlando For Light Heavyweight Title Fight
Eubank Jr: I May Need a Nutritionist, But I Want To See If I Can Do It Myself; I’m That Sick
Teofimo Lopez-Pedro Campa Preview
Teofimo Lopez won, but is he a threat at 140 pounds? Maybe not just yet