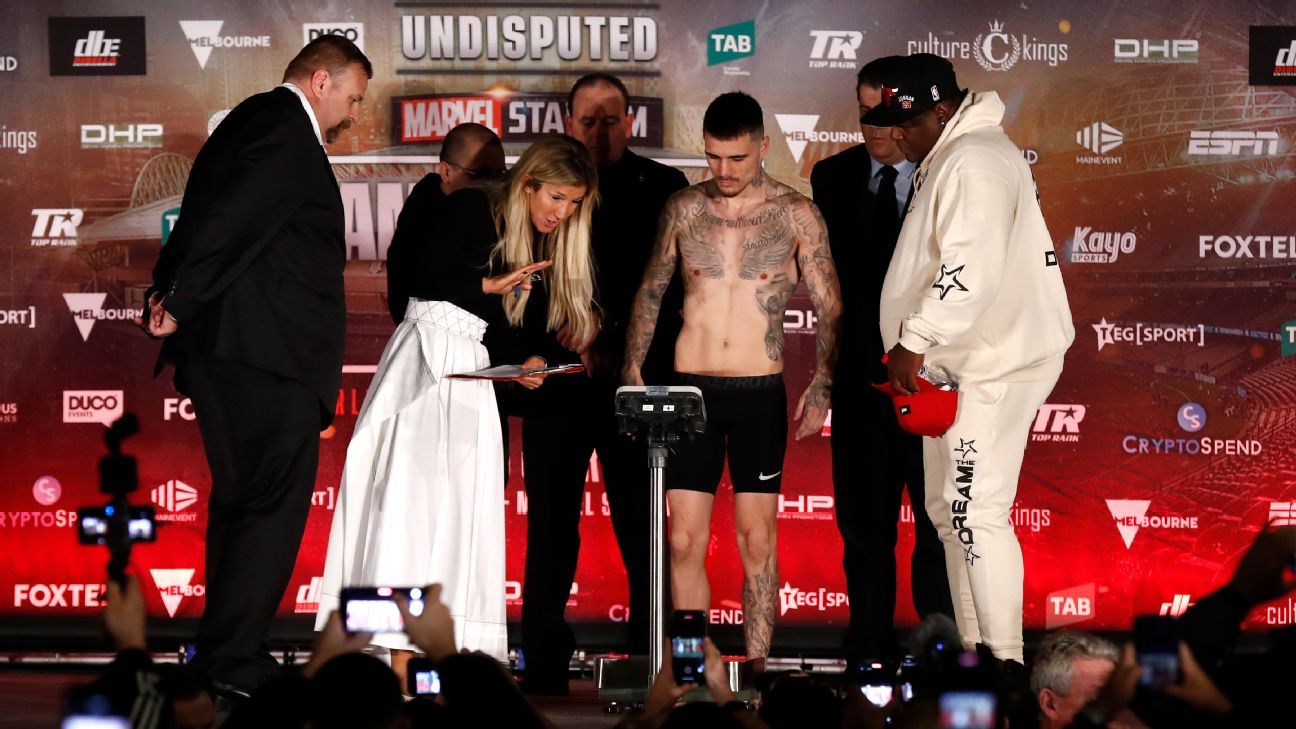 MELBOURNE, Australia — All the lightweight belts officially will be on the line when George Kambosos Jr. and Devin Haney meet at Marvel Stadium on Sunday (9 p.m. ET Saturday, ESPN/ESPN+).

But not before there was some late drama here Saturday morning.

Kambosos initially came in .36 pounds over the 135-pound lightweight limit. He stripped down completely and jumped on the scales for a third attempt to make weight behind a collection of towels, only still to come in above the limit.

Kambosos’ failure to make weight sparked heated scenes, the two fighters coming face-to-face as their respective camps exchanged words around them, the emotions threatening to boil over as both jeers and cheers rang out from the small but vocal crowd at Margaret Court Arena.

The Australian, who holds the WBO, WBA, IBF and The Ring titles, then returned to the stage just over an hour later and recorded the official weight of 134.49 pounds, making Sunday’s fight official.

With the crowd behind him, Kambosos then did his best to make light of the situation.

“Art of war, deception, maybe I did it on purpose,” he said.

“This changes nothing. Art of war, deception, bring it on, I’m ready.”

Top Rank Boxing is now on ESPN and ESPN+. Subscribe to ESPN+ to get exclusive boxing events, weigh-ins and more.

Sensing the opportunity to land a pre-fight psychological blow, Haney was keen to pile onto Kambosos’ earlier error.

“I said he ain’t s—, he ain’t made weight,” Haney said[ when asked what he had told Kambosos when the two fighters had squared up on stage.

“I knew what I had to do, I made weight, and I’m a true champion.

“I mean he’s sucked up, he’s dry, I don’t know, it is what it is, we’ve still got to go in there and fight. But I’m a true champion, and true champions make weight.”

Haney was also buoyed by Friday’s news that his father and trainer, Bill, had been granted a late visa to enter Australia, allowing him to be ringside for Sunday’s fight.

“That meant everything to me,” he said. “Thank you to the Victorian Government, thank you God and I can’t wait for my dad to make it.

Arum: Fury retirement talk hogwash, I expect to negotiate with Usyk vs Joshua 2 winner
From friends to foes: George Groves on boxing James DeGale
Ranked 1-10: The “Most Hated” and “Most Loved” Boxers on the Internet
Bivol ordered to defend belt against Ramirez
Why Joyce-Parker could represent an important turning point