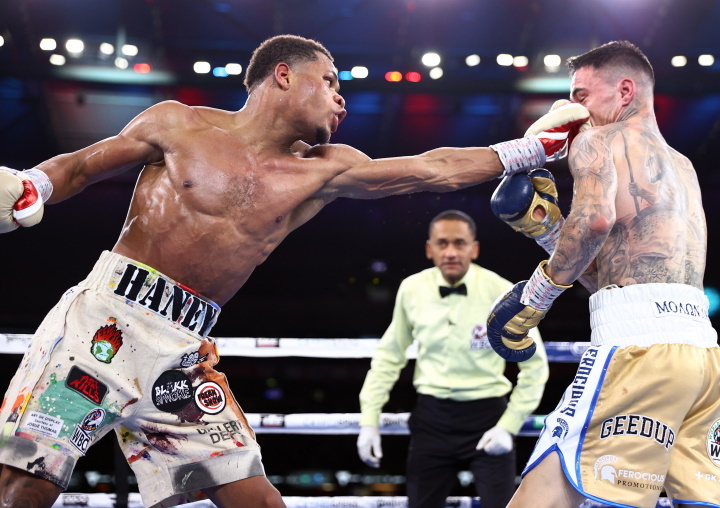 George Kambosos Jr. did not entertain the thought of losing ahead of his undisputed championship clash with Devin Haney.

One thing he vowed to never do under such a scenario, though, was ruin his opponent’s moment in the sun as was the case when Kambosos was in the same position a little more than six months ago.

The now former lineal/WBA/IBF/WBO champion stayed true to his word, classy in defeat after Las Vegas’ Haney (28-0, 15KOs) became the undisputed lightweight champion following a twelve-round, unanimous decision. Scores of 116-112, 116-112 and 118-110 were in favor of the visiting American in their ESPN-televised headliner from Marvel Stadium in Melbourne, Australia.

“This was amazing for the sport. It was amazing for the country,” Kambosos noted after the fight. “At the end of the day, I wanted to take the best and hardest tests. I’m going to give him full respect after his victory today. Let him have his time, and we’ll do it again.

Kambosos floored Lopez in the opening round and survived a tenth-round knockdown to prevail via split decision in a fight he very clearly won in the eyes of most observers. Lopez disagreed and made a point to voice his opinion during Kambosos’ post-fight interview, insisting he won ten of the twelve rounds scored and that it was part of a greater plan to deny him the victory.

The proud Australian-Greek—who brought both cultures to a stadium filled with 41,129 fans—wasn’t about to trample Haney’s shining moment as it was done to him.

“Respect to him, and respect to boxing. This is boxing. You fight the best. Win, lose or draw. This is what it’s all about. F— protecting records.”

Frampton: Joshua needs to bully Usyk, not sure he can do it over 12
Duck noises, contract disputes, & trash talk | Joe Joyce v Joseph Parker Press Conference Best Bits
Rather than unity, the boxing fraternity offers Ringside Charitable Trust a wall of silence
‘I’m back’: Conlan bounces back, beats Marriaga
Golovkin vs. Derevyanchenko and the Harsh Reality of Boxing