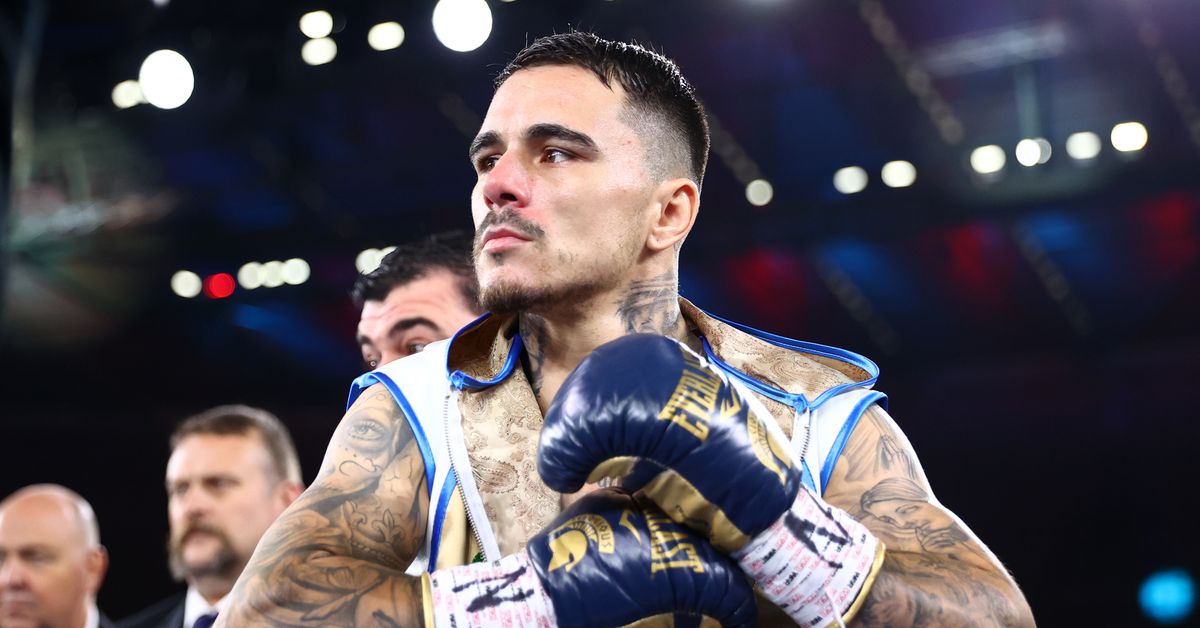 You might reasonably expect the often brash Kambosos (20-1, 8 KO) to take a loss and have a lot of heat behind his words, but Kambosos’ post-fight press conference displayed a humble, still-confident fighter who believes he will bounce back, and clearly is not going to let a defeat in the ring defeat him overall.

And if you’re wondering about the much-discussed rematch — which Haney says “has to make sense” — Kambosos has no question that he will be exercising the clause in the contract.

Some quotes from Kambosos’ post-fight presser:

On whether Haney frustrated him

“I thought I hurt him a few times, but that’s his game. He likes to run and move, and if he feels he’s ahead on the scorecards, he’ll do his thing. But I’m not gonna take away from his night. I’ve been there before when (Teofimo) Lopez did that to me, so I’d be a piece of shit if I did that to him. There are a few things that I thought were — should have been pulled up. But all the best to him. He is the champion now from what the judges said, and we’ll do it again.”

On the scoring of the fight

“I felt the fight was very close. From what I’ve been told, I out-landed him, I out-punched him*. You saw the fight. He had a jab, but there wasn’t much else. I think he might have landed one or two right hands, but that’s it. There really wasn’t nothing else. My body doesn’t feel like I’ve been through a 12-round war like it was in the Lopez fight.”

“If I wanted to protect records, I could have fought an easy fight and, ‘Look at me, I knocked someone out in two rounds.’ I take the risk and that’s part of the risk. You take risks and you reap reward, but it was his night tonight. All the best and be sure that the adversity I go through now, I’m going to be back hungrier than ever.”

“If I wanted to protect records, I could have fought an easy fight and, ‘Look at me, I knocked someone out in two rounds.’ I take the risk and that’s part of the risk.”

On what he needs to change for a rematch

“I know what I’ve got to do to beat him in a rematch. We had the game plan, but we couldn’t implement the way we wanted to. The ref did let a few things go which should have been pulled up a touch, but it is what it is. I’ll go back to the drawing board with my team, but congratulations to Devin Haney and his team for the win. They came all the way out here like I did with Lopez, and they got the win today, but I’ll be back.”

“End of November, we can do it again. … I gave him the shot. No one else was gonna give him a shot. There was too much politics involved for him and Lopez or him and Lomachenko, but I straight away was a man of my word and said, ‘OK, let’s just make sure it makes sense,’ obviously he’s gonna want to make sure it makes sense on his end, but (I said), ‘Let’s get it done. Let’s give the fans a great fight. Let’s fight.’”

On how he felt he performed

“I was sharp in points. I landed some very good shots and hurt him a few times. I felt like every time I landed clean he was hurt, but he just fought his game off that jab. He just boxed off that jab and did his holding. He did hold a lot. He did get low. Every time I tried to exchange he’d hold and drop to that hip. It is what it is.”

On whether Haney surprised him at all

“I thought he would have fought a little bit more, but he’s a good fighter. Don’t get me wrong, he’s a good fighter. This is a high-level chess match. I tried to make it a little bit more aggressive, he boxed his fight, and the judges had him the winner tonight. All respect to him and his team. This is boxing. I’m never here to protect a record. I give him his applause tonight, humble in defeat and victory as well.”

On this laying a path for young Aussie boxers

“This is not the end for me. We will get it on again and I will handle my business next time. At the end of the day, this is a great thing for young kids, amateurs, aspiring professionals. I’ll continue doing my best and I’m very proud to have brought a big fight here, and proud to bring another big fight by the end of the year, and there will be more to come for these young amateurs and these young professionals. … I got to the top, I did get to the top, and I’m still at the top. With or without a belt, I know who I am as a fighter, as a champion, and the belts don’t make me a champion. It’s who I am (in my heart) and who I am fighting the best of the best. This brought Australia together, this brought the Greek community, and I’m sure this brought the world together, as well.”

On his confidence not shaking

“If we fight tomorrow, I’m gonna beat him tomorrow! That’s down to my belief in myself. Nothing changes. We will change game plans and go back to the drawing board, but my confidence will always be sky high. That’s who I am as a person, as a fighter, and I think we all need to believe in anything we do in life. It is what it is. That’s the sport. Tennis players, soccer teams, rugby league teams — they lose, they win, they bounce back, they win the championship at the end. It’s about your next step. This is not the end for me.”

On Haney controlling the fight and what he has to change

“I think when I started to apply the pressure in certain points of the fight, we saw how uncomfortable he was. I tried to bank on my counter-punching, because I’m very destructive as a counter-puncher, but he just worked that jab better than what I did with my jab. He got off a few times when I should have put the pace a bit more. We saw, when I started to put the pace, he would hold. I was never hurt in the fight, not once. He was hurt, I feel, multiple times to the body and with some good shots to the head as well. But that’s what it’s about, he boxed well, he used what he had to do to win the fight. He got the win tonight and I’m sure I’ll bounce back.”

On Vasiliy Lomachenko as a possible opponent

“He was the first choice, originally, and obviously Devin was there as well. What (Lomachenko’s) doing is much bigger than what we’re doing here today. I would welcome that fight with open arms, but let’s hope Devin, as I gave him a shot, he stays at 135 and we do it again. Because I’ve got to get that back now. I have to.”

On how much he looks forward to coming back

“I’ve been through adversity many times. True champions bounce back. The greats, Muhammad Ali, (Roberto) Duran, all these guys bounced back and that’s what makes their legacy. I will bounce back hungrier than ever. That’s what it’s about. The best fighting the best.”

Chris Eubank Jnr says he will be “finished” in boxing should Conor Benn defeat him
Jake Paul, boxing, and the fight that wasn’t
Bivol-Ramirez: WBA Assigns August 21 Purse Bid In Orlando For Light Heavyweight Title Fight
Arum talks Lopez’s return, open to negotiating future fight with Ryan Garcia
‘The only person that beat me was myself’: Will Teofimo Lopez learn from his mistakes?