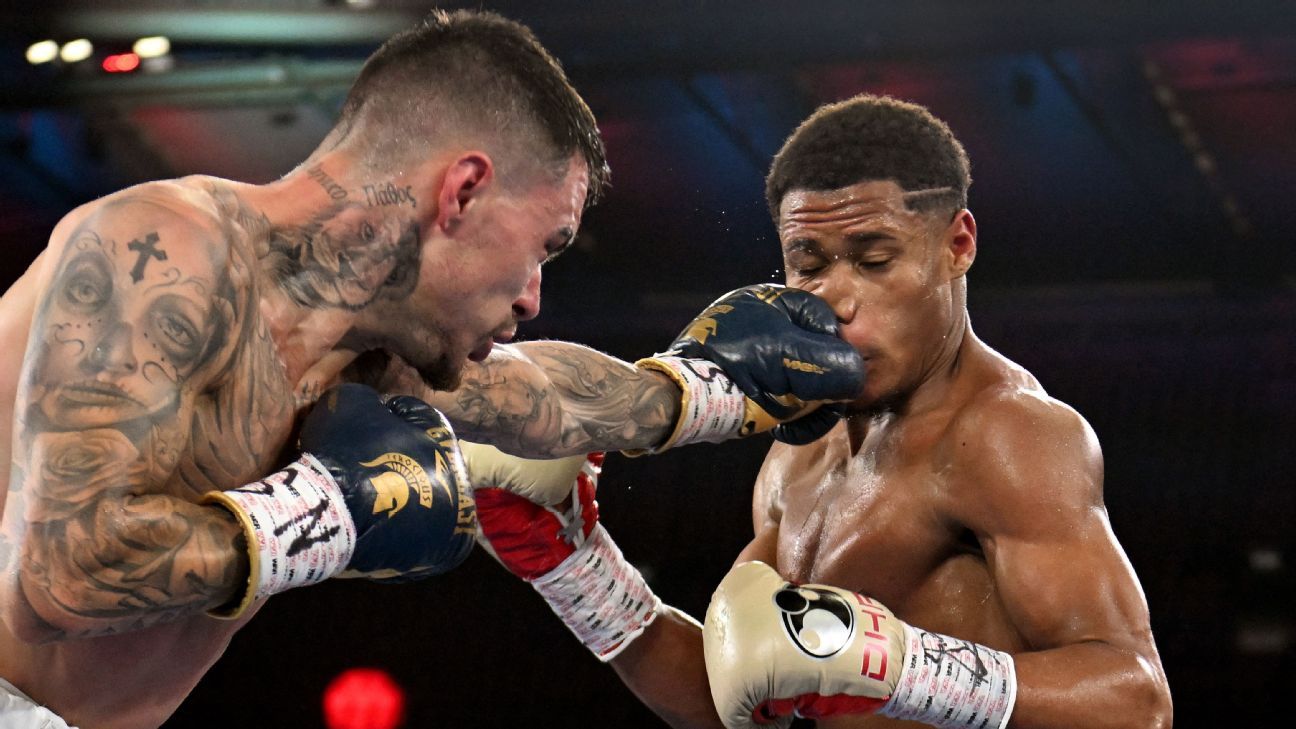 From the Against All Odds t-shirts to chants of “Hellas, Hellas, Hellas”, the Greek-Australian community had been out in force all week in Melbourne, but that only went up a notch — and then some — on Sunday, as 41,129 fans piled into Marvel Stadium to watch home favourite George Kambosos Jr. fight Devin Haney for the undisputed lightweight championship of the world.

But there were pockets of Marvel Stadium that were rumbling from the outset, too.

One particular bay was so blue it was like gazing into the Mediterranean.

This level of Greek support is nothing new in a city that has the largest Greek population outside the country itself. Every year fans flock to Melbourne Park for the Australian Open tennis, supporting the likes of former top-10 player Marcos Baghdatis, current star Stefanos Tsitsipas and, of course, mercurial Australian talent Nick Kyrgios.

Not that they needed reminding, but Kambosos had done his best to mention his “Greek Spartan” heritage at every possible opportunity in the lead-up to Sunday’s fight. In referencing the movie “300” about the great Spartan resistance at Thermopylae, Kambosos had even declared to ESPN’s Mark Kriegel that he was Spartan No. 301.

“Ohhhh, Ferocious Kambosos,” in the tune of The White Stripes’ famous Seven Nation Army anthem, began to ring out ahead of the final undercards. Not to be outdone, and to raise the local support even further, Jason Moloney, who defeated the Philippines’ Aston Palacite via third-round KO, conducted his ring walk to Men at Work’s “Land Down Under.”

If there is an unofficial Australian anthem, Land Down Under is it.

The place was buzzing, and the main event was still to come.

Haney was first to make his ring walk at 1.21pm local time. Such were the boos reverberating around Marvel Stadium, you could barely hear what song he way striding out to. For the record, it was “X Gon’ Give It To Ya” by DMX.

Then it was Kambosos’ turn. The time had come for Kambosos to enter his Coliseum. And he did so to 50 Cent.

After the American, Greek and Australian national anthems, at last the opening bell rang.

The two fighters felt each other out in the first round, Haney the more aggressive as he landed with his left jab. But by the end of the first round Kambosos was finding his range.

That continued in the second as Kambosos landed a right hand and cries of “Haney’s a dog” rolled around the seats nearest the ring. But there were far too fleeting examples of Kambosos’ prowess, as Haney kept his range superbly and tagged the Australian with his left jab over and over again.

Four rounds in and the crowd was deathly quiet. Knowing their fighter was in trouble by Round 6, sporadic chants of “Ferocious Kambosos” went up again around Marvel Stadium.

But they never lasted long as Haney continued to ram home his advantage, the American conducting his own boxing clinic that had him wearing barely a scratch.

Kambosos, meanwhile, was showing the signs of ongoing punishment. A cut below his right eye, where Haney was landing his jab continually, began to swell further, while the Australian’s head was increasingly looking the colour of the Team Haney tracksuit, a brilliant red, across in the opposite corner.

And their man was putting on a brilliant show.

So comfortable was Haney he later said he “took the last round off”.

Even the most one-eyed Australian or Greek could see Kambosos required the knockout as the fight entered its closing rounds, that he needed to find the same right hook that put Teofimo Lopez to the floor in New York City late last year.

But Kambosos never got close.

This was Haney’s fight on Haney’s day, after a week that had been all about Kambosos and an Acropolis moment in Australian boxing.

Such was the comprehensiveness of Haney’s victory, he won via the unanimous decision of 116-112, 116-112, 118-110, that there was not even the suggestion of a boo when the scorecards were read out.

“I was just staying relaxed, I could have picked it up [the pace] … but I knew I was in his backyard, so I just wanted to stay smart and fight my fight,” Haney told reporters, with the belts laid out in from of him, backstage after the fight.

“So it was more when I wanted to fight, I was fighting my rhythm and taking away his best attributes, and that’s what I did.”

Kambosos and promoter Lou DiBella are adamant that the rematch clause will be exercised in Australia by the end of the year.

While Sydney and Brisbane could both be potential destinations, it appears Melbourne would be the first preference and Victorian Government officials afforded the first opportunity to either accept or decline.

Would over 40,000 fans return? Potentially not, but Kambosos will have lost few supporters on Sunday – even in defeat.

“I felt the fight was very close,” Kambosos said. “From what I’ve been told, I outlanded him, I outpunched him, you saw the fight.

“He had a jab but there wasn’t much else, I think he might have landed one or two right hands, but that’s about it. There wasn’t really nothing else. My body does not feel like’s I’ve been through a 12-round war, like it was with the Lopez fight.

“I’m the man in the arena. At the end of the day I made this happen, I didn’t choose this to protect records; I could have fought an easy fight and [said] ‘look at me, I knocked someone out in two rounds’.

“But I take the risk and that’s part of the risk, you take risk and you reap reward. But it was his night tonight, and all the best [to him]. And pretty sure the adversity that I have to go through now I’ll be back hungrier than ever.”

Having long promised a stadium fight in Australia, Kambosos delivered exactly that on Sunday.

He just didn’t get the result. Haney was able to silence the parochial local crowd with a boxing clinic worthy of the undisputed lightweight championship of the world.

Canelo: “Crawford Is A Better Fighter” Than Spence
Terence Crawford On Errol Spence Negotiations: “We’re “Working To Get It Done For Y’all”
Wilder Manager: A Joshua Fight is Enormous Even If He Loses To Usyk
Nowhere To Run! | Joe Joyce v Joseph Parker Live Press Conference
Oleksandr Usyk Arranges For Rematch With Anthony Joshua To Be Broadcast In Ukraine For Free