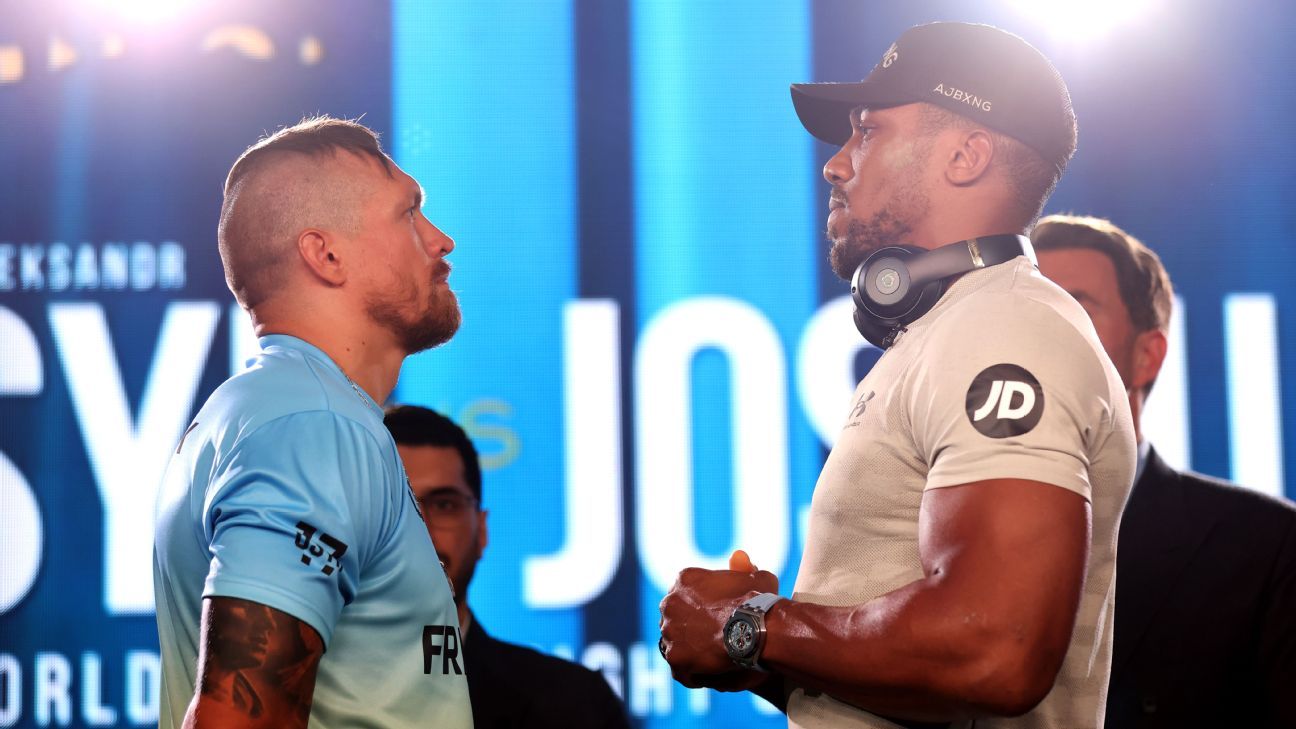 If you want some insight into how Saturday’s world heavyweight title fight between Oleksandr Usyk and Anthony Joshua will go, Joe Joyce is a good person to listen to.

A rematch takes place at the neutral — and slightly surreal — setting of the Jeddah Superdome in Saudi Arabia, after a delay caused by war in Usyk’s native Ukraine.

How can Joshua, 32, in his first fight with new trainer Robert Garcia, alter the course of the sequel after being out-moved and out-boxed by Usyk in September?

“I think because he’s the bigger man, he has to be the big man in the ring and use his power to his advantage,” Joyce told ESPN.

“If Joshua can land his power shots he’s got a chance. AJ was getting frustrated in the first fight because he couldn’t land. He needs to throw more damaging shots and land with every shot, maybe more offensive combinations.

Joyce (14-0, 13 KOs), who is No. 1 contender for Usyk’s WBO belt and expects to fight again on Sept. 24, last sparred with his one-time friend Joshua in 2017, early in his professional career, and sparred many more rounds with him when they were both part of Great Britain’s Olympic boxing squad. ‘The Juggernaut’ also suffered a first-round stoppage loss to Joshua early in his amateur career in 2011 and knows only too well what his English rival’s strengths are.

“Boxing on the back foot, he’s got devastating power, punching with both hands, but the question is his chin,” Joyce said.

Defeat to southpaw Usyk, 35, was the second time Joshua has lost three of the four world heavyweight titles. In 2019, American Andy Ruiz pulled off a big upset when he stopped Joshua in seven rounds, but later that year Joshua comfortably won the belts back on points.

“Joshua’s tactic is to come forward throwing some combinations, but there’s a danger of him getting tired too,” Joyce added. “He’s got massive physique — especially his arms — so he’s got power shots, but it’s about delivering that power. When Murat Gassiev fought Usyk [in 2018], he couldn’t land his big punches, the same as Joshua. It’s frustrating when you can’t find the target. When I fought Daniel Dubois, a big puncher, he had to have his feet set to land a punch. But by keeping my feet moving, I could nullify his power. He had a certain 30-second window when he could land his punches before he was tired out. Usyk will know the things that worked against Joshua last time, so he just has to do it more efficiently to win again, so it’s a big ask for Joshua.”

As an amateur, Joyce lost a unanimous decision to Usyk in 2013, a year after the Ukrainian won heavyweight gold at the London 2012 Olympics. Usyk went on to become undisputed world cruiserweight champion and beat Joshua in his third heavyweight bout.

Joyce is leaning towards the champion retaining his belts against Joshua.

“It’s in Usyk’s favor, and he will probably win the rematch” Joyce said. “He’s more skillful but it’s heavyweight boxing and AJ has a puncher’s chance if he can put Usyk under pressure. Usyk has got better footwork and movement. Joshua has good technique too, he’s just not as good as Usyk, who is more mobile and quicker. He kept Joshua guessing in the first fight.

“Usyk sometimes takes a few rounds to work his opponents out but with Joshua he just went straight to work and knew what he was doing. He’s already beaten him and knows what he’s doing, what works. He’s obviously been working on some more stuff too. Maybe he’s been working on his power and will test AJ’s chin. He knows he can land his shots from the first fight. It will be a tough fight for Joshua and it’s whether he can turn it around. I would say Usyk, but Joshua has a shot.”

Joyce, who took out Christian Hammer in four rounds last month, is also in a strong position to fight for the WBC title, currently held by his English rival Tyson Fury, who maintains he is retired despite speculation he will face the winner of the Usyk-Joshua rematch.

“Fury will wait to see what happens with Usyk-Joshua, he will want to fight the winner especially if it’s Joshua,” Joyce added.

“But I’m No. 1 with the WBO so if they call for the mandatory fight, then great. The belts will become available for me to fight for in the next year, one way or another.”

Chris Eubank Jr v Conor Benn: The story of a grim day for British boxing
Panel: If you had to choose between Chris Eubank and Nigel Benn, who would you pick as your favourite and why?
Conor Benn: “I’m a clean athlete and we’ll get to the bottom of this”
Rey Vargas-O’Shaquie Foster Super Featherweight Title Fight Ordered By WBC
Eder Jofre, Former Two-Division World Champion, Passes Away at 86