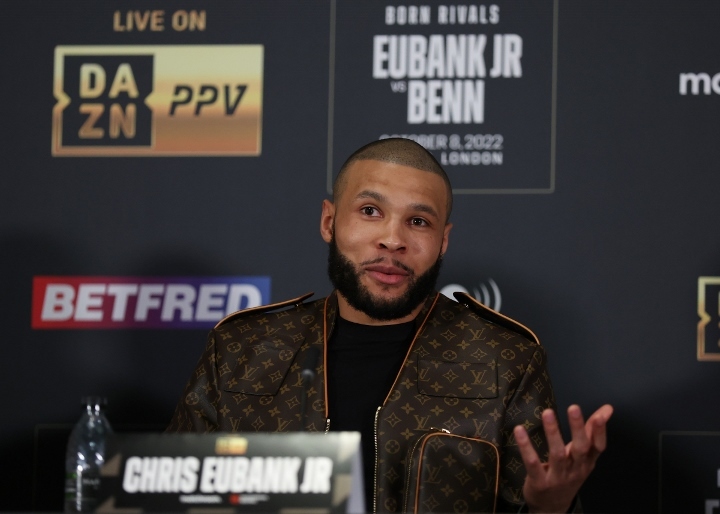 Chris Eubank Jr. has a tendency to march to his own beat, but even a self-admirer such as himself concedes that he might need a hand or two for his upcoming fight.

Eubank, a career 160 and 168-pound contender, will have to boil down to the 157-pound limit for his upcoming catchweight bout against welterweight countryman Conor Benn on Oct. 8 at The O2 Arena in London.

Eubank has rarely sought outside assistance, saying in a recent interview that he has never employed a personal chef or nutritionist to help him  make weight. That may change for the Benn fight, given that he has to reach a weight that he claims he has never been at since he was 18. Famously, the middleweight has even trained himself ahead of some of his fights. Lately, he has been working closely with Hall of Famer Roy Jones Jr.

“I never had a nutritionist for a fight ever,” Eubank told BBC 5 Live Boxing. “This may be the first camp in my life where I may have a nutritionist or a personal chef, you know someone who is providing certain types of meals, certain amounts of food, I may need that.”

Still, ever the self-governing type, Eubank says he will handle the nutritional aspect of his camp on his own, at least in the initial phase. If it turns out that he is having trouble shaving off a few pounds, he will then seek to employ a professional.

“I’m actually going to try and do it on my own and if I can see, ‘Oh, ok, we’re getting a bit tight here, we’re getting a bit close,’ and if I think I’m not where I think I should be, I’ll bring some people in,” Eubank said. “But I want to see if I can do it. I’m that sick, I’m just like, I want to see if I can do this myself. I’ve never had a nutritionist, I’ve never had anybody measuring my body fat and you know calories—I’ve never looked at calories ever.”

Also working against Eubank is a rehydration clause stipulated in his contract with Benn. The handlers of both fighters have been mum on the exact poundage, but Eubank is only allowed to rehydrate up to a certain limit on the morning of the fight.

Eubank believes these concessions could lead to Benn being just as big, if not bigger than, him on fight night.

“I have a certain weight that I can only get back up to,” Eubank. “I’m weighing the day in and before the fight and all that stuff. He (Benn) walks around that weight anyway. He may even be bigger than me on the fight, obviously I’m taller. This 15 pounds heavier that [George] Groves had on me, nowhere near that.”