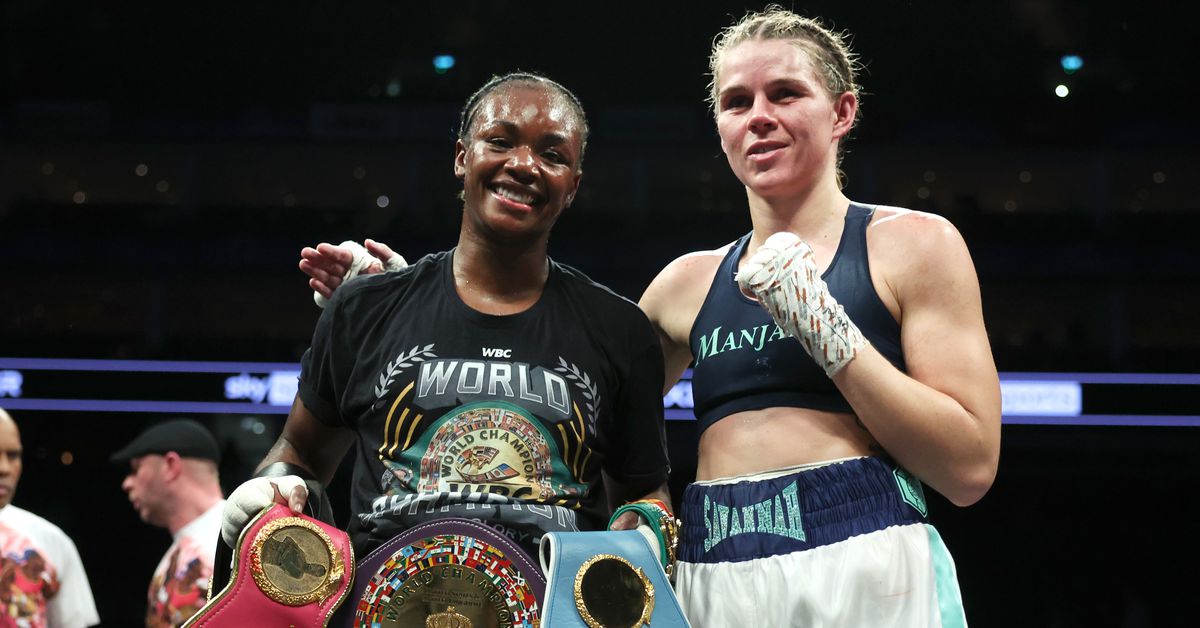 LONDON — I’d love to tell you that there was a different feeling inside London’s O2 Arena on Saturday night, but in truth, there wasn’t.

The same characters swayed along the gangways, balancing six beers across two trembling hands. The same queues snaked around corners for overpriced pizza and chips. And the same rendition of ”oooooooh (insert fighter’s name),” sung to the tune of The White Stripes’ “Seven Nation Arm,” echoed around North Greenwich like there was a local council rule stating that at least someone inside the building had to be singing it at any one point.

And this is the biggest compliment that could possibly be paid to the 22 women who fought on Boxxer’s ”Legacy” card in front of a sold out 20,000-strong crowd. For it was just another night of championship boxing.

That doesn’t aim to diminish the significance of a female-only bill, the first-ever televised in the United Kingdom. I spoke with Alycia Baumgardner a number of times before her fight with Mikaela Mayer at this event and even she felt conflicted in the need to put on a card void of any male bouts.

“This moment will elevate the entire sport by showing how women can hold an entire card together and entertain the fans just as well as our male counterparts,” Baumgardner explained before edging the former Olympian in a split decision win.

“With these fights, we’re not just elevating boxing, but we are also setting the tone for what all women’s athletics can and should be in the future. But ultimately, I am not sure there is a need to separate cards and make a point of distinguishing between men’s or women’s fights.”

The comparisons continued post-fight as Claressa Shields and Savannah Marshall were asked for their reaction to the turn-out inside the O2 Arena.

“When people said women’s boxing didn’t have fans, when they said women’s boxing didn’t sell out venues, nobody would watch it — we got watched by millions of people today, fought in front of 20,000, and we put on a great fight,” Shields exclaimed, followed by Savannah Marshall adding, “I’m still amazed two women managed to sell out the O2 Arena, because most men don’t even do that!”

Whether or not female-only cards is the answer for further growth is yet to be seen, but Saturday night’s event needs to act as a springboard for more opportunities. The talent pool needs to deepen by giving young girls the accessibility to boxing gyms and boxing training so they can follow in the footsteps of the women who are now finally becoming stars. And if the sport is to keep hold of the talent it is nurturing, then their purses will need to better reflect their contributions.

The argument for three-minute rounds will also re-surface following the weekend’s fights, and it’s certainly something that should be explored in the future, but for now, let’s revel in the trail that this quartet of fighters have blazed. The night that “women’s boxing” became just “boxing.”

Hearn: Whyte Needs To Needs To Impress and Show He Has A lot Left
‘I’m on my way out’ Derek Chisora meets Ugo Monye | Tyson Fury v Derek Chisora | BT Sport Boxing
Franklin: Whyte knows I won, deserve a rematch
Panel: If Dillian Whyte and Anthony Joshua fight again in the future, who would you pick to win?
Tyson Fury vs Derek Chisora III: In Camp