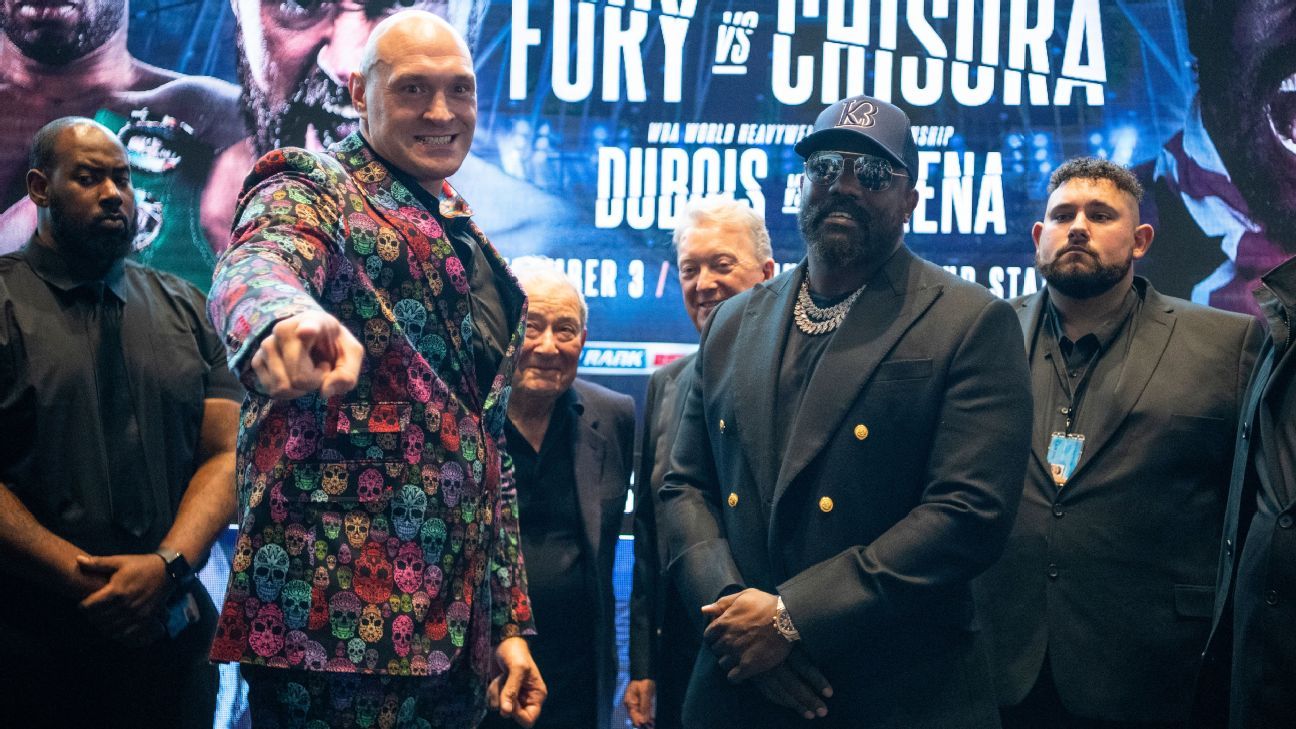 LONDON — Tyson Fury has said he rates Derek Chisora as highly as Oleksandr Usyk as he prepares for the trilogy fight at the Tottenham Hotspur Stadium in December.

The 34-year-old heavyweight had been in discussions to face compatriot Anthony Joshua for the December fight date, but sources told ESPN’s Mike Coppinger those negotiations broke down after agreeing to a 40%-60% split in favour of Fury, who was already in talks to face Chisora.

Fury, who is ESPN’s No. 1 heavyweight and No. 6 pound-for-pound boxer, told a news conference on Thursday: “I rate Derek Chisora as highly as I rate Usyk, and I will train as hard for Derek as I would for anyone in the world. I’d have to be an idiot not to.”

Fury brought a bag with £10,000 ($11,300) in cash to the news conference, saying he won the money from promoter Warren when he bet that Joshua would not make a fight with him.

Fury last fought in March, delivering a highlight-reel uppercut knockout of Dillian Whyte at Wembley Stadium before announcing his retirement.

Usyk said following his win against Joshua that he will not fight again this season but maintains that his next fight will be a unification bout. Fury told ESPN later on Thursday that he is not thinking about a fight with Usyk and will only plan to fight Chisora.

Fury has twice beaten Chisora in his career — first via a comfortable unanimous decision in 2011 followed by a 10th round stoppage in 2014 — causing some to question if there is an appetite for a third fight.

“In terms of selling Derek Chisora to the fans: I ain’t gotta sell nothing to nobody,” Fury added.

Chisora does not represent an imposing to challenge to Fury. He endured a difficult recent run with losses to Usyk in 2020 and two defeats to Joseph Parker, but the 38-year-old bounced back with a split-decision victory over Kubrat Pulev in July.

“Physically and mentally, I want to come and take it. I don’t want it; I want to physically take it off him.

Warren said Chisora was the WBC champion’s last available option. He ran through a list of 10 fighters — with Fury at No. 1 and Chisora at No. 9 — and described why a bout each of the eight fighters in between them could not happen on Dec. 3. He added that Usyk won’t fight until next year, Joshua was a month’s “waste of time,” and poor timing a reason for others not being an option.