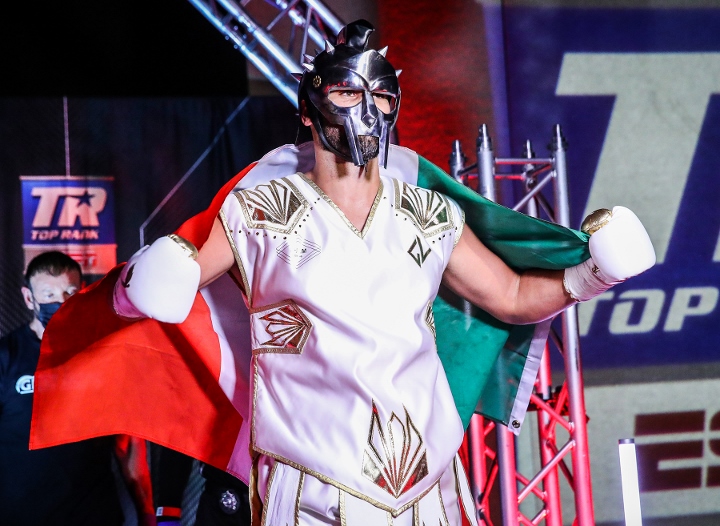 Jay McFarlane, the Scotsman from Glasgow (13-6, 5KO), is the next opponent for Guido Vianello (9-0-1, 9KO) – when they collide in the main event in Rome, on Friday the 28th of October, at the venue “Pala Atlantico.” The show is promoted by OPI Since 82 and Top Rank.

The body of McFarlane is indeed a colorful one: loads of tattoos, iconic haircut, a physical exteriority which, in his

own words, is quite “chunky”.

McFarlane wants to cause a huge upset and, regardless of his appearances, he will let the ring do the talking. He is coming to Rome knowing that he is the underdog, but will put everything he has in his power to shake the ground of the heavyweight division.

The Vianello vs McFarlane card will be streamed on ESPN+.

You know you are a colorful character. The banter, your outfit, the way you express yourself on social medias. Where did you get this from?

“It’s just me, really. It’s not a character, it’s the way I am. I try to entertain but it’s my personality, it’s unapologetically me. I don’t care what anybody think of me, I just try to be happy”

How is your training?

“I was in the gym this morning, and back again tonight, I’m doing at least two sessions a day, in between I work in my barbershop”.

Where does the passion for barbering come from? And the tattoos?

“It’s satisfying to make people feel good about themselves, it makes me happy to see that they look better and feel great, I like putting a smile on people’s faces”

When and why did you start boxing, and who were your boxing heroes when you were a kid?

“I started boxing when I was 8 years old and my favourite boxer was Jack Dempsey. Because he would chop bigger men, it was always David versus Goliath. Max Bear, I loved him as well. I started boxing because I had to lose weight. I was a very fat child. I was so fat you wouldn’t believe me. I was a goalkeeper and couldn’t make even a run. One football match there was some arguments in the pitch and I punched somebody with my gloves on and knocked the fella out. It felt good. I went to the gym and never left”

You’ve been dubbed from Italian fans as the Scottish brother of Andy Ruiz. Feels like a compliment?

“There’s levels in boxing. Maybe they see the tattoos and the chunky side. I have some self-esteem but I wouldn’t compare to Andy Ruiz. All I can say is that if Italian fans think Vianello will beat me easily, they should remember of how Ruiz scored an upset against Joshua in 2019. I’ll do the same to Guido, mark my words!”

Why did you move to the heavyweight division? You’ve been a successful cruiserweight; you were champion of Scotland.

“I didn’t move to the heavyweights, I had always been a heavyweight for my entire career but there was this opportunity and some negative people told me that I could never make the 200 pounds’ limit for cruiser and indeed I proved them wrong, nearly killed myself with the dramatic weight cut and even ended up winning the Scottish cruiserweight title.

It’s your first fight abroad in a while: how does this make you feel? The last time it was on the undercard of Jacobs vs Golovkin in the temple of American boxing, Madison Square Garden.

“I expect to be an amazing experience. My dream was to travel and box, and Rome was on my dream list. I wanna show to the Romans that I’m good.”

In a short documentary on your life made by Boxxer, you say that you come from a harsh neighborhood of Glasgow. How proud are you of being main event on such a stage, live on Mola in the UK and on ESPN+ in USA, against the #1 Italian heavyweight?

“I was never meant to be a successful person for when I come from. I’m from a very rough area of Glasgow. Now, I’ve got my own business. I fought as a professional boxer, won a title. I will be in the main card of such an event, live on ESPN+: it’s such a big opportunity to be recognized around the world. I’m proud of myself. Most of my friends in childhood are either dead, drug dealers or in jail. I think my attitude in life has helped me a lot for what I’ve accomplished.”

You’re clearly the underdog of this fight, so what would it mean to you to score a big win against a fighter like Vianello?

“I’ve been an alcoholic for some part of my life, you know. Now I’m totally clean. I’ve changed my life completely. I’m gonna better my life when I beat Guido. I will get his Top Rank contract. You know, it would change everything. When I fought in Madison, I was drunk. On Sky, I was hungover. Nobody has seen the real Jay McFarlane. With this match, everybody will see my strength, the power of my engine. I’m coming for gold. I’m coming for everything”.

Should Stephen Fulton and Brandon Figueroa Run It Back?!
Curtis Harper: I’m Gonna Go Toe-To-Toe With Jalolov & Do My Best To Take Him Down
Tyson Fury vs Derek Chisora III: In Camp
Jean Pascal Arrested On Suspicion of Drunk Driving in Montreal
Spence Indicates He’s Working Out His Next Move, Thurman Fight Looms