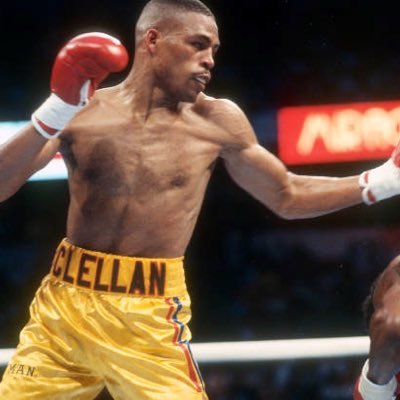 He was called the “Bible of Boxing.” At 17, he was the youngest world champion in history at the time. He was so slick in the ring, a young “Sugar” Ray Leonard was almost unable to defeat him. The same was true for Thomas “The Hitman” Hearns. Roberto Duran, “Manos De Piedra” himself, failed outright in his attempt to best the man. Make no mistake about it, Wilfredo Benítez is a legitimate legend in the sport of boxing. Yet now the fighter who once literally thrilled millions is immobile, living destitute with his sister, the victim of too many head shots. When Leonard went to pay him a visit, Benitez was unable to remember his old friend and foe.

Gerald McClellan was some kind of fighter himself. So hard did the man hit, that by the time he faced Nigel Benn in 1995, a whopping 29 of his 31 wins had been by knockout. McClellan wasn’t one to take on easy touches, either, having notched victories over the likes of John Mugabi and Julian Jackson. Indeed, McClellan knocked Benn out of the ring in the first round. Benn came back, however, ferociously knocking McClellan out in the 10th. McClellan would never recover from the fight. Now living with his sister, McClellan has been supported in part by the likes of Roy Jones, but is still clearly in need of help.

Pritchard Colon has a very impressive 16-0 resume when he slipped between the ropes to face the fellow undefeated welterweight Terrel Williams in 2015. It was admittedly a rough and strange fight (Colon was disqualified because his corner started to remove his gloves at the end of the 9th round, thinking it was the end of the 10th and final round). Colon is now cared for by his mother, as he is in a persistent vegetative state (PVS).

What Benitez, McClellan, and Colon have in common, aside from suffering permanent and severe damage in the course of their careers, is John Scully. Known as “Ice,” the former light heavyweight turned broadcaster and highly regarded trainer spends a considerable amount of time helping these and other needy ex-fighters get the financial help needed to support themselves and their families.

“Basically it’s pretty simple,” Scully says of his charitable method. “I have different pieces of boxing memorabilia that I have acquired either on my own or through people sending them to me in the mail, and I put them up on my Facebook and have people bid on them like an auction. Once they receive it in the mail I can then send the money to different people who need it at that time.” Scully generally likes to be in contact with those he helps, though that can’t always be the case.

“I have some guys who I see in person on a regular basis and I have others that I can simply mail money to,” he says. “Also I often just simply mention these particular boxers on social media to kind of remind people that they are there and that they still need help.” These guys entertained and inspired more than a few people in their time. It’s nice to see people going out of their way to return the favor.