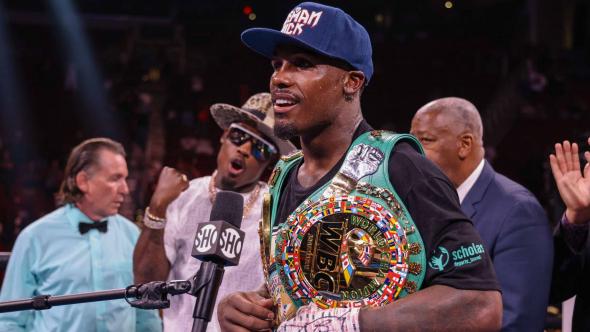 WBC middleweight titlist Jermall Charlo  approached WBA light heavyweight titlist Dmitry Bivol Saturday night at the Regis Prograis-Jose Zepeda fight in Carson, California. The exchange was captured on video by Fight Hype. The brief conversation, which appeared quite cordial, involved Charlo wanting to meet Bivol at a catchweight for what would surely be a major match. Bivol, however, made it clear that he wasn’t eager to drop weight to fight Charlo with no title belt on the line. Credit Charlo for stepping forward, but it’s hard to imagine Bivol biting at this point in his career.

Charlo brought up the fact that a fight between himself and Bivol would still be a major event with or without belts. He was right, of course, but Bivol wasn’t biting. “No belt,” said Charlo. “Just attraction. Let’s do it.” There’s little doubt a Charlo-Bivol fight would certainly be an attraction. Still, Bivol appears happy with the path he’s on. And why wouldn’t he be? The guy bested Canelo Alvarez in a crowning career achievement earlier this year, after all. On top of that, the man recently got past Zurdo Ramirez and now seems headed for a light heavyweight championship battle against hard hitting fellow titlist Dmitry Bivol.

As for Charlo, the 32 year old fighter hasn’t entered the ring professionally in close to a year and a half. The Houston native’s last fight was in June of 2021. He faced Juan Macias Montiel that night, earning a unanimous decision victory in front of a hometown crowd. Since that time, however, Charlo has essentially been absent from the ring. With that being said, Charlo has made it clear that he intends to fight next year. It just appears that he won’t be facing Bivol, at least not anytime in the near future.