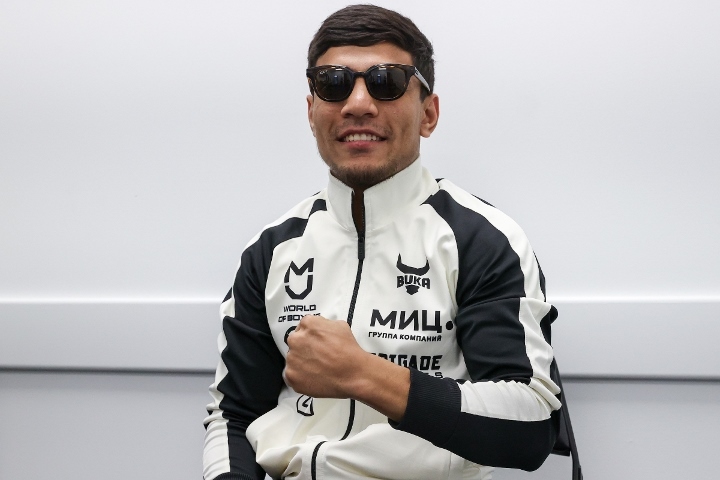 The teams surrounding Murodjon Akhmadaliev and Marlon Tapales have made the most of the allotted extension to come to terms.

BoxingScene.com has confirmed that a deal has been reached for the IBF-ordered Akhmadaliev-Tapales mandatory junior featherweight title fight. The agreement comes in time to cancel an already postponed purse bid hearing that was due to take place on Tuesday at IBF headquarters in Springfield, New Jersey.

Additional details—including date and location—were not immediately made available as this goes to publish. It is believed that the fight will take place towards the end of the first quarter of 2023 or in early April. Akhmadaliev will make the fourth defense as the unified WBA/IBF junior featherweight titlist while Tapales enters his first career title fight.

The agreement came during the tail end of a two-week period following the postponement of the previously scheduled December 20 purse bid hearing. Oddly, the original session was requested by Tapales’ team immediately after the fight was reordered in early December. However, the army of representatives for the Filipino contender— MP Promotions, Sanman Boxing, Shapiro Sports, and Viva Promotions—collectively agreed to back off that hard stance once it was realized that Matchroom Boxing and World of Boxing—Akhmadaliev’s co-promoters—were eager to reach a deal.

Akhmadaliev (11-0, 8KOs)—a 2016 Olympic Bronze medalist for Uzbekistan who trains out of Indio, Caliofrnia—was initially ordered to enter talks with Tapales (36-3, 19KOs) on January 4. The two sides were given until February 2 to reach a deal. That order was rescinded, once it was realized the WBA was first in the rotation of mandatory title defenses.

Tapales’ side argued at the time that Rios lost his place in line after testing positive for Covid ahead of his originally scheduled fight with Akhmadaliev last November 19 in Manchester, New Hampshire. The WBA eventually got its way, with Akhmadaliev facing and defeating Rios in a twelfth-round stoppage on June 25 in San Antonio, Texas.

The win came at a cost, with Akhmadaliev suffering a broken left hand. His team—Matchroom Boxing and World of Boxing—used the injury to their advantage once the IBF put its mandatory title fight back in play in September. The 30-day period met not with a deal in place but with Akhmadaliev filing a medical exception right at the October 25 deadline.

It bought another five weeks for the unbeaten Uzbek before the fight was ordered in December, for a third time. Tapales’ team wasn’t interested in waiting any longer than necessary, contacting the IBF to bypass the negotiation period and call for a purse bid—which either side is permitted to do at any time.

Akhmadaliev’s prior IBF mandatory title defense was honored last April 3, when he scored a fifth-round knockout of IBF mandatory challenger Ryosuke Iwasa in Tashkent, Uzbekistan. The bout was his first in his home country since an amateur tournament in 2017, one year after claiming a Bronze medal for Uzbekistan in the 2016 Rio Olympics.

Tapales, a 30-year-old southpaw from Kapatagan, Philippines, punched his way back into title contention following a second-round knockout of Hiroaki Teshigawara. The bout served as a title eliminator at the request of Tapales’ team. Tapales rose to the occasion, flooring Teshigawara three times in just 3:06 worth of ring action in forcing the stoppage in their December 11 clash.

It was a far more memorable ending than his previous title eliminator, two years almost to the day of his win over Teshigawara.

Tapales suffered an eleventh-round stoppage to Iwasa in their December 2019 eliminator in Brooklyn, New York, which ended a twelve-fight win streak. He has since won three straight heading into his first career title fight, including a second-round knockout of Jose Estrella in a stay-busy affair on May 14 at Dignity Health Sports Park.

Per IBF purse bid rules, neither fighter is permitted to enter an agreement for another bout during the period for the ordered title fight.