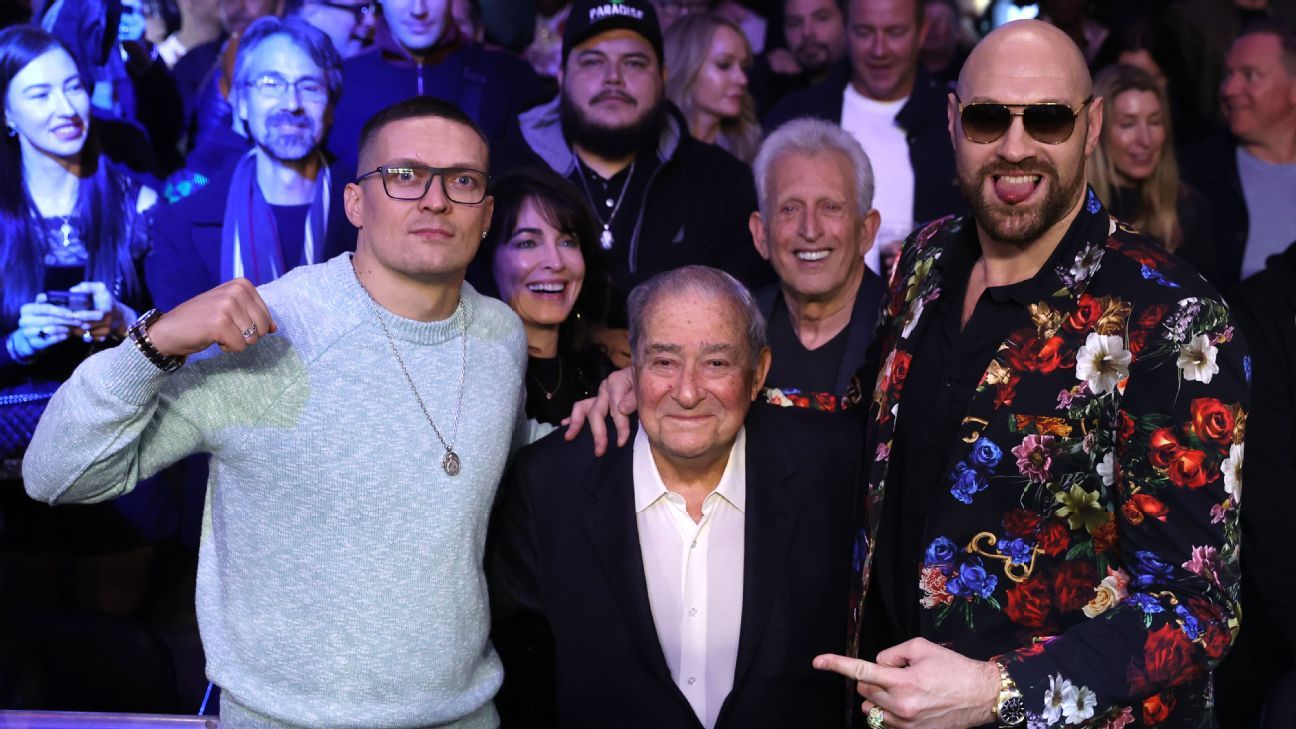 At long last, four years after their second bout, archrivals Canelo Alvarez and Gennadiy Golovkin met for a third time, but the September trilogy fight fell far short of the first two battles. It’s no surprise, of course, after boxing failed to deliver this matchup when both fighters were at their peak.

There were countless attempts this year to make a multitude of super fights that fans have been clamoring for. Most of them were unsuccessful. Errol Spence Jr. and Terence Crawford still don’t have an agreement to meet in a welterweight summit meeting, and if boxing drags this out much longer, the fight will sail by its expiration date.

The same goes for an anticipated U.K. showdown between Tyson Fury and Anthony Joshua, a fight that was eyed for December. Instead, “The Gypsy King” easily handled Derek Chisora for a third time.

If 2022 was a year marked by a lack of marquee matchups, 2023 shapes up as a campaign that will deliver far more of the fights fans crave.

Some of those bouts are already on the calendar, while others are in the process of being finalized. With the year ending, here’s a look at the fights boxing needs to finalize in this year.

Tyson Fury vs. Oleksandr Usyk for the undisputed heavyweight championship

This is the most important fight boxing can deliver. Period. The sport is only as relevant as its heavyweight landscape, and in Fury, boxing has the sort of star power in its glamour division that’s sorely lacked for years. Deontay Wilder was a fitting foil for Fury, and they produced three thrilling fights. But a showdown between Fury and Usyk stands to easily eclipse the bouts with Wilder in terms of global magnitude.

Usyk already closed his deal with Saudi Arabian officials, who were prepared to dole out $155 million for the rights to the Fury-Joshua undisputed title fight in 2021 that didn’t happen. Meanwhile, Fury continues his negotiations with the Saudis for a bout that is on the verge of completion for springtime in the Middle East. It would be a surprise if this fight doesn’t happen next.

Usyk is an Olympic gold medalist coming off back-to-back wins over Joshua for the unified heavyweight championship.

Usyk, 35, is ESPN’s No. 4 pound-for-pound boxer and is pegged as the only heavyweight with a realistic shot of upending Fury’s reign. Usyk, a former undisputed cruiserweight champion, is a slippery boxer who’s shown impressive power in his second weight class. His use of angles could befuddle Fury, too.

But Fury will still be the favorite, and with good reason. At 6-foot-9, 270 pounds, he’ll enjoy a six-inch reach and 50-pound weight advantage. Fury is also a sublimely skillful boxer, but under the guidance of trainer SugarHill Steward, Fury has learned to use his immense frame and strength to maul opponents on the inside.

That’s the strategy Fury is sure to employ against Usyk in what shapes up as a heavyweight championship fight for the ages.

For years, Spence and Crawford have circled each other, and if they can’t reach a deal soon, they risk denying boxing fans of another megafight while both fighters remain at their peak.

The sides were closing in on a pact to fight on Nov. 19, but talks between Spence’s manager, Al Haymon, and Team Crawford collapsed. Instead, Crawford went on to score a spectacular sixth-round KO of David Avanesyan on Dec. 10.

Dialogue remains open between PBC and Crawford’s side, but no deal appears imminent.

It’s looking increasingly likely that if Spence-Crawford materializes in 2023, it will be in the second half. Boxing fans would settle for that at this juncture since Spence-Crawford is one of the best fights the sport can offer. They’re both undefeated, high in the pound-for-pound top 10 and are ruthless finishers at the height of their powers.

Probability it will happen: 7/10

Gervonta Davis vs. Ryan Garcia in a 136-pound catchweight bout

Ryan Garcia discusses the lead-up and potential outcome of what he calls “the greatest fight you will ever see” vs. Gervonta Davis.

While Fury-Usyk and Spence-Crawford feature higher stakes, Davis-Garcia is probably the biggest commercial fight in all of boxing. “Tank” Davis is a bona fide attraction who sells out arenas across the U.S. Garcia is one of the sport’s top stars with over 9 million followers on Instagram.

They’ve already agreed to a deal for an April 15 fight in Las Vegas at a 136-pound catchweight, but the bout could still fall apart for a variety of reasons. Davis first must face Hector Luis Garcia, the WBA 130-pound titleholder, on Jan. 7 in Washington, D.C. While Davis is a heavy favorite to remain undefeated, he also must emerge without injury.

The 28-year-old also has an upcoming court date for his alleged involvement in a hit-and-run incident in 2020. That court date was moved from Dec. 12 to Feb. 16. Davis was also arrested on Dec. 27 in South Florida and charged with misdemeanor assault. He denied any wrongdoing.

Garcia, meanwhile, was set to take on Mercito Gesta in a Jan. 28 tuneup fight but nixed the bout on Dec. 16 and said he’ll head straight into the duel with Davis.

With Davis and Garcia’s younger fan bases, boxing has a unique chance to welcome new viewers to what promises to be an explosive firefight between two damaging punchers.

Probability it will happen: 9/10

Devin Haney vs. Vasiliy Lomachenko for the undisputed lightweight championship

Haney, who fights out of Las Vegas, broke out in 2022 with a pair of victories over George Kambosos Jr. in Australia. At 24, the slick boxer heads into 2023 as both the undisputed champion at 135 pounds and one of the best pound-for-pound fighters in the sport.

While the fights with Kambosos raised his profile and made him the guy to beat at lightweight, a bout with Lomachenko promises to be far more challenging. Sure, Lomachenko didn’t look great in his narrow points win over Jamaine Ortiz in October, but the fight came against the backdrop of the war in Lomachenko’s native Ukraine and after a 10-month layoff.

Against Haney, Lomachenko will need to be at his best, and that’s when he slides in the pocket to create openings from dizzying angles. Haney should have an answer for that with his excellent jab and footwork that always keeps him at ideal range. This is a very intriguing matchup.

Haney wanted this fight to happen before Ramadan begins on March 22 (ends on April 21) but has agreed to wait until May as the sides close in on a deal. Haney is Muslim and will fast during Ramadan.

Probability it will happen: 9/10

Beterbiev has been a wrecking ball at 175 pounds with a string of bashing knockout victories over top-10 competition. The 38-year-old will meet another such fighter in Anthony Yarde on Jan. 28 in London.

With an expected win over Yarde, Beterbiev could turn his attention to his fellow Russian Bivol, who owns the one light heavyweight belt Beterbiev needs to become undisputed champ.

This matchup is hotter than ever after Bivol’s seminal 2022 that featured a rout over Canelo Alvarez, then the pound-for-pound king, and a dominant decision over Gilberto Ramirez en route to ESPN fighter of the year honors.

Bivol, 32, used to box off the back foot almost exclusively, but in those two wins, he pressed the fight and inflicted far more damage than usual. His offense is all set up by one of boxing’s best jabs. But Beterbiev boasts his own jab, one delivered with power and precision that busts foes up round after round.

The sides were in talks last year before Bivol landed the Alvarez fight, so there remains hope this bout can materialize despite the fact they’re aligned with different promoters.

Probability it will happen: 6/10