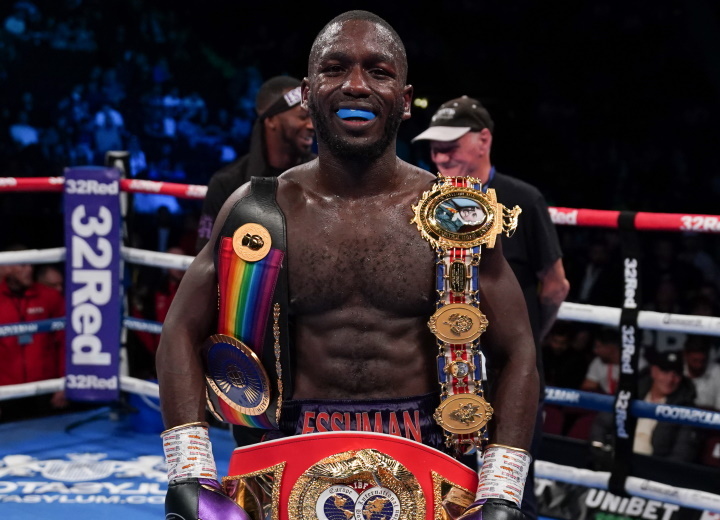 The British & Commonwealth, IBF European and WBC International Silver welterweight titles will be on the lines as Ekow Essuman and Chris Kongo go head-to-head in a scintillating addition to the undercard of Chris Eubank Jr vs Liam Smith on Saturday, January 21 at Manchester’s AO Arena.

‘The Engine’ produced a comprehensive, unanimous points victory over BOXXER’s Samuel Antwi at the same venue last September to retain his British & Commonwealth titles and protect his flawless record (18-0, 7 KOs).

But Essuman will undoubtedly face a tough test in the form of ‘2 Slick’ Kongo in what promises to be a barnstorming title clash.

Kongo captured the vacant WBC International Silver Welterweight crown when he defeated Sebastian Formella last June in London. And he’ll be hungry to start the new year in style by putting the first dent on Essuman’s burgeoning CV and claiming two prestigious titles.

Rising heavyweight sensation Frazer Clarke is another addition to the event which is broadcast live, in the UK and Republic of Ireland, on Sky Sports Box Office.

The Tokyo 2020 Olympic bronze medal hero is eager to ascend up the heavyweight rankings this year and will return to the scene of his last victory.

An opponent will be named in due course but Clarke (4-0, 3 KOs) will be keen to remind the division of his incredible power as he did last November when he outclassed Kamil Sokowlski over six rounds.

Another explosive heavyweight prospect is confirmed for January 21 too in Matty Harris.

The hard-hitting Coventry fighter (3-0, 2 KOs) burst on the scene in 2021 and last year added two impressive stoppages to his rsum, defeating Mait Metsis and Pawel Strykowski. An opponent for Harris will be named soon.

And unbeaten Scottish cruiserweight starlet Scott Forrest (3-0, 3 KOs) will be keen to showcase his talent on the night when he collides with Amine ‘The Beast’ Boucetta (7-5-0).

BOXXER Founder and CEO, Ben Shalom said: “These are four terrific additions to what is already a blockbuster card. Tickets are selling out fast with a bumper crowd all set for an incredible night of boxing in Manchester.”

The main event – in association with Wasserman Boxing – sees bitter middleweight enemies Chris Eubank Jr and Liam Smith face-off in what promises to be an epic domestic clash for the ages as both rivals bid to take a giant leap towards their desired world title pursuits.