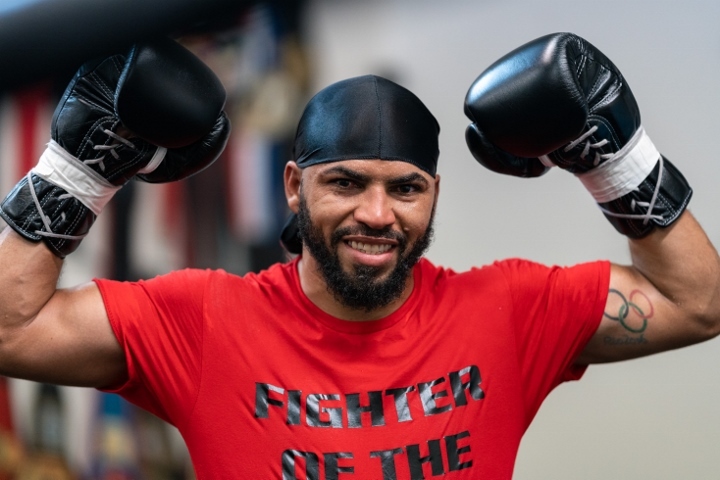 WBA super featherweight world champion Hector Luis Garcia is very confident in his ability to shock the world on Saturday night, when he moves up to the lightweight division to face heavily favored WBA ‘regular’ champion Gervonta “Tank” Davis at the Capital One Arena in Washington, D.C. (photo by Ryan Hafey)

Their fight will headline a Showtime Pay-Per-View card.

Garcia (16-0, 10 KOs), a 2016 Olympian for his native Dominican Republic, catapulted himself into the spotlight in 2022 – when he shocked Chris Colbert with a dominant decision.

And then Garcia picked up another dominant victory over Roger Gutierrez to capture the WBA title.

Garcia believes that a victory over Davis will stamp down his worth as one of the best fighters in the sport.

“Davis in my opinion is a top pound-for-pound fighter and one of the biggest punchers in boxing, so I know going into this fight that I’m an underdog. Not a lot of people are giving me a chance in this fight, but that’s what motivates me. I was in the same situation going into the Colbert fight, but this time I had a real training camp. I believe my style will give ‘Tank’ problems. I’m a southpaw with many tricks and I will be using all of them when I step in the ring on January 7,” Garcia said,

“A victory against ‘Tank’ will solidify me as one of the best fighters in the world. I already believe that in my own mind, but the world will realize how good I am after this fight. I didn’t get here by myself. I want to thank my team for all their support. Getting this fight has changed my life forever, but winning it will do wonders for everyone on my team.”