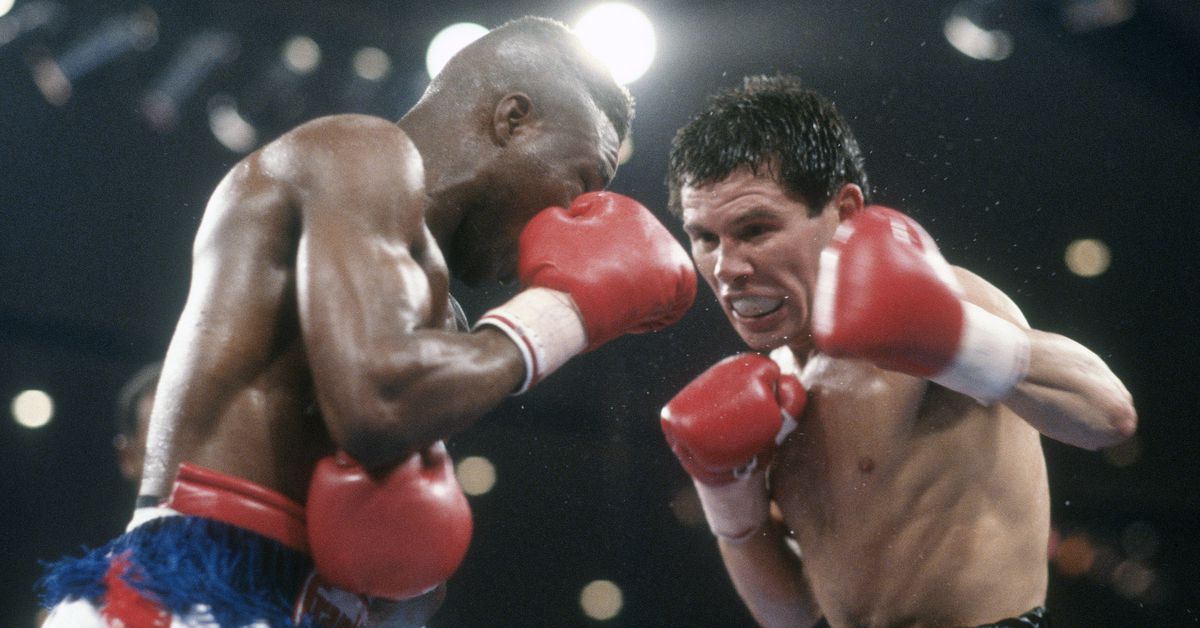 Julio Cesar Chavez commenced his career in illustrious winning fashion, building the fourth-greatest undefeated win streak in the history of professional boxing at 68-0 leading up to his 1990 clash against Meldrick Taylor.

Of those 68 unblemished wins, 16 of them came in championship fights, and 11 of those 16 came by way of knockout. This earned the Mexican legend 11-5 betting odds just moments before the opening bell.

Taylor was nothing to scoff at either. While he wasn’t boasting a win-loss resume quite like Chavez’s, he did come to Las Vegas without a loss to his name at 24-0-1.

Unification was on the line, as Chavez held the WBC title and Taylor the IBF belt in the 140 lb division. This unification bout did all but disappoint, and stands as one of the most exhilarating matches you’ll ever see at 140, or any weight class for that matter.

Taylor and Chavez came out light on their feet, orthodox, with Chavez taking the inside of the ring. Notorious for his conservative style early in fights, Chavez did throw a decent amount, but was not as busy as Taylor, who found success to the body, and landed a couple of 1-2 and 1-2-3 combinations that showed off his impressive hand speed.

Chavez’s right hand was begging to be fed in the second round, and he fed it with the sweat and bloody mouth of Taylor as he tagged him repeatedly upstairs. Taylor was already accustomed to countering almost everything Chavez threw and strategically pounded away at the sides of Chavez’s hips to wear him down. Though his 96 punches in round one were followed up with a punch count of similar verve, Chavez landed more meaningful blows, giving him the round.

The fight went toe-to-toe in round three, and Taylor continued to launch a multitudinal attack with exemplary hand speed. Round four was extremely tough to call, as Taylor continued hitting various targets on Chavez’s body, while Chavez remained headhunting and connecting, especially with a straight left that snapped Taylor’s head back. Chavez narrowly took the round.

Round five belongs at the Smithsonian, as a pure display of artwork was unveiled. Both fighters buried their heads into each others’ shoulders and took turns popping his opponent. It was a dead even round. But Meldrick Taylor made sure to seize the sixth and seventh in grand fashion. From Popeye wind-ups that comically connected to straight rights and thunderous uppercuts, Taylor put on a clinic to establish a lead on the scorecards. Every action has an equal and opposite reaction, and Chavez took that pummeling with heart and durability, never ceasing to throw shots back at Taylor.

One thing to be noticed is that if Chavez had simply mirrored Taylor punch-for-punch, it could have been a much different story through 24 minutes. Instead, he was just getting beaten to the punch, and that was the story of the night. It’s quite the thing to marvel at, considering HBO Punchstat had Taylor at a 38 percent connect rate and Chavez just one point behind, yet they tabulated a 708-372 punch discrepancy in favor of Taylor — more than doubling up Chavez.

What is more commendable? Landing dozens of times to the head in one round, or surviving such grueling punishment and remaining on one’s feet in valiant fashion? One can appreciate the precision of Taylor just as much as the heart and toughness of Chavez.

Back against the wall, having been thoroughly outboxed for six consecutive rounds, Julio Cesar Chavez did what many were expecting pre-fight, but had lost faith in, and that’s score a knockout.

It’s not so simple, though. The knockdown came with less than 15 seconds left. Taylor got up off the canvas, and stood on his feet. With just five seconds left in the bout, referee Richard Steele famously (or infamously) stopped the contest. In heartbreaking and unfair fashion, a monumental win was robbed from Meldrick Taylor. There’s no way a fighter dominates for that long in the fight, in which both competitors are on their last legs and last wind, only to call it with barely enough time to even throw an exchange. It was yet another travesty that is sure to anger anyone knowing what they were watching.

It’s difficult to appraise Chavez on the basis of a win when it’s hard to conclude that he won the fight. It took tremendous willpower and skill to knock down Taylor with the proverbial shot clock winding down, and it was as much of a buzzer-beating win as you’ll ever see.

Chavez skated to win No. 69 by the skin of his teeth and would follow up this victory with 18 more, extending his win streak to an unfathomable 87-0 professional record. This came to an end in 1993, when he and Pernell Whitaker fought to a majority decision draw.

Meldrick Taylor went through a rollercoaster ride of a finish to his career. He was able to secure the WBA welterweight championship only two fights after his bout against Chavez. But from the controversy in Vegas up until he hung up his gloves, he went 14-7 the rest of the way, including a second loss to Chavez in 1994 by way of an eighth-round TKO.